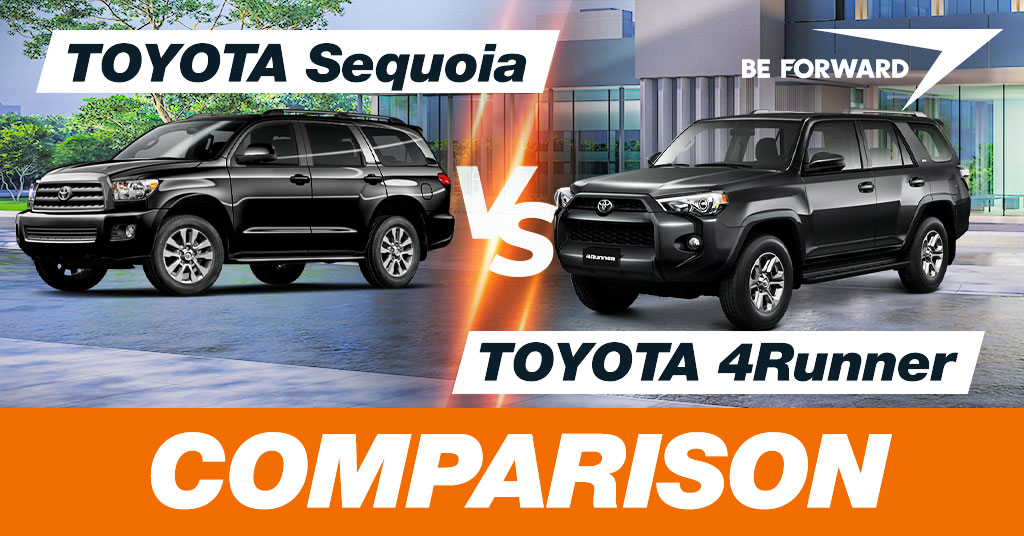 Toyota is the best-seller in the Hatchback, SUV, sedans, and pick-up vehicles which have been around for many years.

Toyota is well-known for its diversity of everyday and functional cars. Both are good for an adventure, larger than life, you might be interested in the Toyota 4Runner or the Sequoia.

N.B: Prices are reflective of average BE FORWARD pricing as of March 2022.

The Toyota Sequoia is a full-size SUV produced by Toyota and since 2000 sold mainly for the North American market and designed borrowed from the Tundra pickup truck. After the Japanese Domestic market, Toyota Sequoia is the largest SUV ever produced under the Toyota lineup.

The Toyota Sequoia has a roomy cabin that can carry 8 people with the available leg- and headroom on each row compared to the 4Runner and the interior of the Sequoia is full of heavier plastic.

Inside the Toyota Sequoia cabin, you will find numerous storage boxes that are useful for keeping items such as handbags, smartphones, goggles, and beverages. In the 1st row, you will find 3 cup-holders, a center box, a glovebox, and door pockets. In the 2nd row, there are only door pockets while in the 3rd row there are side panel pockets.

The Toyota Sequoia has average boot space when all seats are used but when more space is needed the 2nd-row seats can be folded down and make the large space for accommodating more luggage.

The latest Toyota Sequoia exterior looks similar to the Toyota Tundra (XK70) but the design appeals to a male clientele.

The Toyota 4Runner has many storage stalls used for keeping handbags, beverages, bottles, and smartphones. In the 1st cabin, there is the center box, door panel storage, a glove box, and 2 cup holders in the control panel. In the 2nd cabin, there is door panel storage, a storage compartment with 1 USB port, and 2 cup holders in the armrest when it flips down.

The Toyota 4Runner features its own distinctive look on every trim level. TRD Off-Road trims stand out with unique features including TRD badging on the exterior and 17-inch 7-spoke alloy wheels with black-painted inserts. The 4Runner Limited models feature chrome door handles, front grille, stylish 20-inch split 6-spoke alloy wheels, and exclusive front fascia. The 4Runner has complementing the rugged design, with LED taillights and LED headlights adding a touch of style while offering you superior visibility. Skid plates help protect the front suspension/engine and transfer case from damage when traveling across rough terrain on all 4X4 models.

The 3rd generation which is the latest generation of Sequoia comes fitted with only single-engine choices, a twin-turbo 3.4L V6 gasoline hybrid engine which combines with a 2NM AC permanent magnet synchronous which produces a maximum power output of 437 hp (combined system output). This engine is attached to a 10-speed AWR10L65 “ECTi Direct Shift” automatic.

The latest Toyota Sequoia fuel consumption is between 6.5 Km/L to 11.5 Km/L.

The 5th generation 4Runner is the latest generation powered by two engine options: a 2.7L 2TR-FE I4 petrol engine (157 hp) which produces a maximum power output of 157 hp and a 4.0L 1GR-FE V6 which generates a maximum power output of 270 hp. These engines push power to the wheel via a 4-speed automatic for I4 for the 2010 model only or a 5-speed automatic for a V6 engine. All are available in 2WD and 4WD.

Toyota is well-known for its full SUV with luxury, enough power, and exciting interiors such as Toyota Sequoia, Toyota 4Runner, and Toyota Land Cruiser.

The Sequoia and the 4Runner are tremendously capable and reliable. Out of the 2, the Sequoia is family-friendly but the 4Runner is more practical.