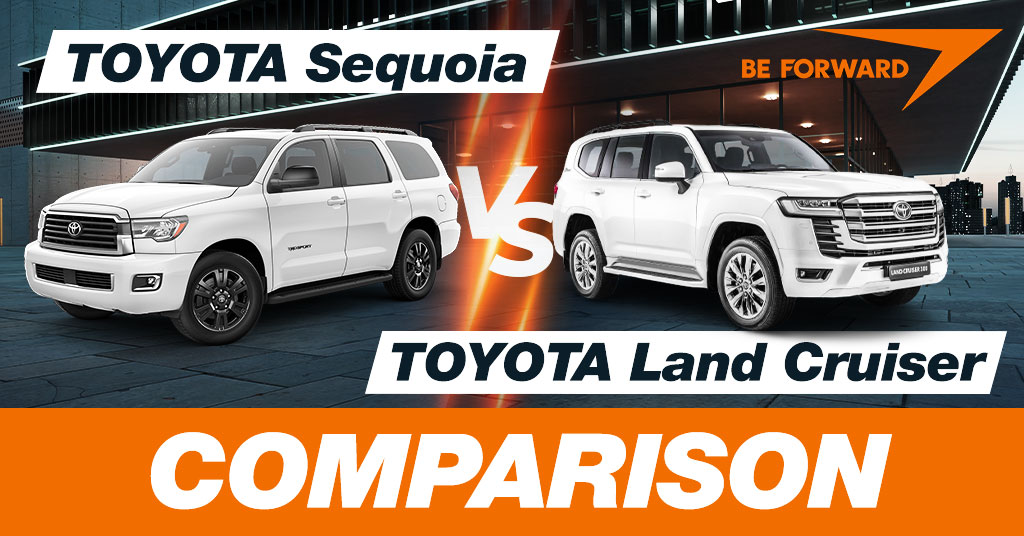 Toyota is a popular brand around the world for manufacturing powerful, reliable, and durable cars. Toyota is the best-seller in the SUV, sedans, pick-up, and hatchback vehicles which have been around for many years. The Sequoia and Land Cruiser look similar in every aspect but they differ in other aspects like interior, engine, performance, and exterior. The Sequoia has been in production since 2000, while the Land Cruiser has been in production since 1951 therefore we can say Land Cruiser is a legend to Sequoia.
Toyota is famous for its variety of functional, everyday cars. But if you need an adventure-ready option, larger than life, you might be interested in the Toyota Land Cruiser or the Toyota Sequoia.

Therefore in this piece of article, you will understand the differences between these two SUVs. So read to the end to understand these 2 SUVs.

(*Prices are reflective of average BE FORWARD pricings as of April 2022.)

The Toyota Sequoia is a full-size SUV manufactured by Toyota and sold mainly for the North American market since 2000 and designed from the Tundra pickup truck. After the Japanese-market, military-focused Mega Cruiser, Toyota Sequoia is the largest SUV ever produced under the Toyota brand.

The Sequoia exterior looks have an old-style but the design appeals to a male clientele.

The Sequoia has a larger cabin that can accommodate 8 people with the available leg- and headroom on each row compared to the Land Cruiser and the interior of Sequoia is full of heavier plastic.

Inside the Sequoia cabin, you will enjoy several storage compartments that are useful for keeping items such as goggles, beverages, handbags, and smartphones. In the driver row, you will find a center box, 3 cup-holders, door pockets, and a glovebox. In the second row, there are only door pockets while in the third row there are side panel pockets.

The Sequoia has medium cargo space when all seats are utilized but when more space is required the second-row seats can be folded down and make the large space for carrying more luggage.

Toyota Land Cruiser (LC) is a series of 4WD vehicles produced by Toyota and is Toyota‘s longest-running series of models. The first generation has been in production since 1951. The Land Cruiser has been produced in hardtops, station wagon, cab chassis, and convertible body styles.

The Cruiser‘s longevity and reliability have led to enormous popularity, especially in Australia, where it is the best-selling body-on-frame, 4WD vehicle.

The Land Cruiser LC300 series has a superb exterior appearance and is attractive compared to a Toyota Sequoia. The front appearance is well designed and attached with a front grille which offers a greater look.

The interior of the Land Cruiser‘s new model has a modern look style with a well-designed cluster with an advanced infotainment system. The seats are well positioned and offer more comfort and support. In the first and second row cabin, you will find a large space for both passenger and driver to enjoy.

In the cabin, you will find storage facilities that are for storing items such as goggles, smartphones, beverages, and handbags. In the front row, you will find 2 cup holders, a center box, door panel storage, and a glovebox. In the second row seats, you will find a front seat pocket and storage on the door storage panel.

The boot space is larger than Toyota Sequoia which is sufficient enough to carry more luggage.

The latest version of Toyota Sequoia comes fitted with only single-engine choices, a 3.4L twin-turbo V6 gasoline hybrid engine which attached to a 2NM AC permanent magnet synchronous which generates a maximum power out of 437 hp (326 kW; 443 PS) (combined system output). This engine is linked to a 10-speed AWR10L65 “ECTi Direct Shift” automatic.

The latest Toyota Sequoia fuel consumption is around 6.5 Km/L to 11.5 Km/L.

Depending on the model and year of manufacture the Land Cruiser‘s fuel economy is around 7.5 km/L in urban, and 11.2km/L combined.

Toyota has a good full SUV with comfortability and enough power such as Toyota Land Cruiser, Toyota Sequoia, and Toyota 4Runner.

The Toyota Sequoia and the Land Cruiser are some of those car models that are uncountable in almost every detail. Both have good comfortability and performance but the latest Land Cruiser model seems to have more cargo space, comfortability, and high performance. Both models seem to have a similar fuel economy.

The Sequoia and the Land Cruiser are extremely reliable and capable. Out of the 2, the Sequoia is family-friendly and more practical. The Land Cruiser is ideal for those who can afford simplicity and splurge on refinement.