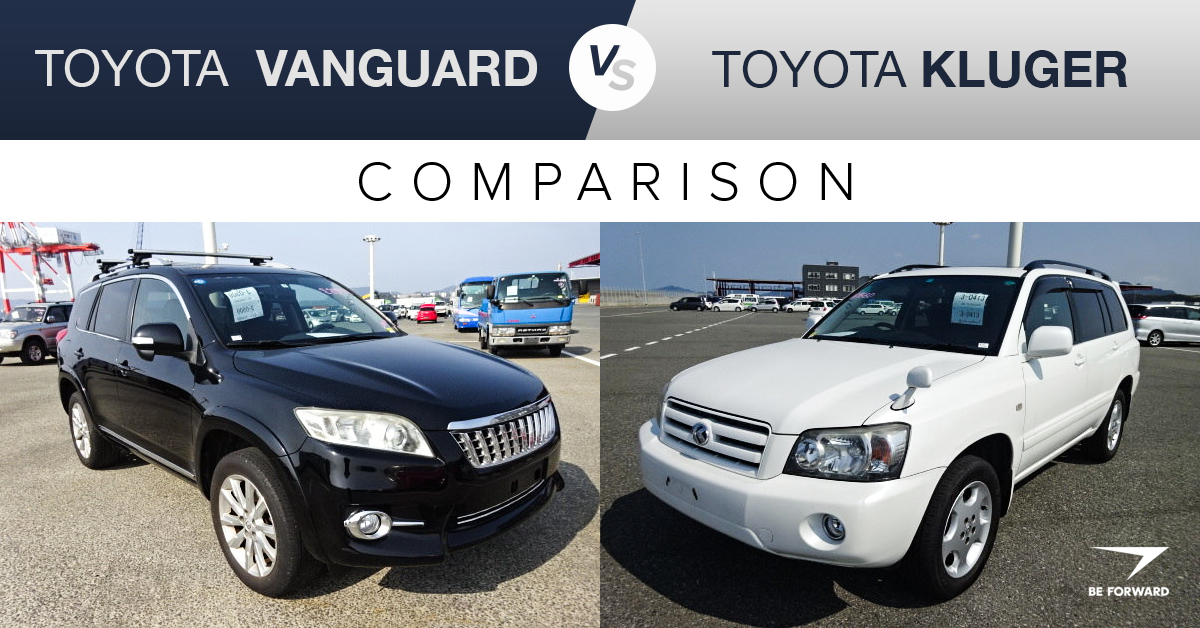 SUVs like the Toyota Vanguard and Toyota Kluger provide a great amount of flexibility for Africa’s rough road conditions, thanks to their equal performance on-road and off-road. What are the similarities and differences between these popular vehicles? Take a closer look in this SUV car comparison review.

Before we get into the details of what separates the Vanguard from the Kluger, here is a quick overview of the details we will be looking at later.

The Toyota Vanguard began production as a compact middle-class SUV initially produced to replace the Toyota Kluger V model. It has a long body with a spacious cabin that allows for extra seating, and it comes in five- or seven-seat variants. The car’s overall dimensions are 4570 x 1855 x 1690 mm, and it is based on the third generation Toyota RAV4 with a long wheel base, which places it somewhere between the Toyota RAV4 and Toyota Kluger.

The Toyota Vanguard comes in two versions: the 240S and 350S. The 240S is a 2.4 liter 4-cylinder engine producing 170 horsepower at 22.5kgf-m. The 350S is slightly more developed, with a 3.5 liter 6-cylinder engine producing around 280 horsepower at 35.1kgf-m. Both versions are equipped with full-time four-wheel-drive (4WD), and a number of high-tech features including steering-assisted stability control, keyless entry, and advanced satellite navigation system.

Also known as the Toyota Highlander in North America, the Toyota Kluger is a crossover SUV that has been in production since 2001. It is a four-door SUV with a front engine design and front wheel drive. The model spans three generations of refinement and innovation, including hybrid features like Toyota’s electronic stability control—a system that controls and integrates full-time 4-wheel drive with intelligence—electronic control brakes, throttle control, and true electronically controlled active steering.

Second and third-generation Toyota Kluger models offer a 6-cylinder 3.5-liter engine that produces 270 horsepower. The car’s overall dimensions are around 4785 x 1910 x 1730 mm, making it larger than the Toyota Vanguard.

Let’s examine which of these Toyota SUVs is a better bargain in the areas of used pricing and features.

A used Toyota Kluger costs around $2,000–3,000 on BE FORWARD. For newer models (second and third generation), the car has been equipped with a higher speed automatic transmission that helps cut fuel consumption.

Examine the Vanguard and Kluger inside and out to see which vehicle matches your style and needs.

The Toyota Vanguard has slim and robust headlights that curve around the sides of its front end, with an integrated bumper and fender signalling the car’s stability. It has two sculpted lines that combine with the fog lights, conveying a sense of both refinement and strength. The sides create a silhouette that smoothly flows from the hood to the roof and the rear spoiler, adding to its visual appeal.

The interior of the Toyota Vanguard is spacious and comfortable. The door trimmings and the bronze-tone finish used on the centre console add a taste of luxury, finished off with comfortable seats that in many models are made from a combination of genuine leather and Alcantara microfibre.

The exterior of the Toyota Kluger is designed to reflect its sporty personality. Its forward leaning stance, bow-shaped fenders, and gently sloping roof create a sense of constant motion while also enhancing the aerodynamic performance. Fitted with large alloy wheels, the Kluger is also equipped with low resistance tyres to help reduce fuel consumption and running noise.

The Toyota Kluger’s interior design provides comfort and style. In particular, it has a considerable amount of luxurious and sophisticated comfort for larger numbers of passengers, thanks to its flexible, soft touch material seating and conveniently placed cup and bottle holders. It provides heated front seats with adjustable passenger and driver positions, which also come with extra ventilation and a 2x memory function. The clever interior design also provides a large amount of space for cargo and other luggage that is easily accessed with a wide opening rear door.

Which gives you the best performance under the hood? Keep reading to find out!

The Toyota Kluger features a 6-cylinder, 3.5-liter internal combustion engine, that produces 270 horsepower. It also has a 5-speed automatic transmission. It has a 70-liter tank and an average engine displacement of 2364 cc. It also yields a torque of roughly 221 Nm, with its main fuel option being petrol.

For newer models (second and third generation), the car has been equipped with a higher speed automatic transmission that helps cut fuel consumption.

When comparing the two vehicles’ overall engine and motor specifications, the Toyota Kluger has a slightly better fuel efficiency than the Toyota Vanguard.

Seeing as the Toyota Vanguard and Toyota Kluger are from the same family and share a number of similar features and specifications, both models provide an equally excellent driving experience and overall handling. For those in the market for a smaller SUV the Vanguard may be the best choice, while those looking for a larger SUV with a slightly more powerful engine may opt for the Kluger.

Regarding pricing, on average a used Toyota Kluger can often be imported at a cheaper price compared with the Toyota Vanguard. With this in mind, for those on a tighter budget the Kluger may be a good choice. Ready to search for quality used Toyota Vanguard and Toyota Kluger cars? Click or tap the buttons below to browse through BE FORWARD’s list of available used car exports to Africa.