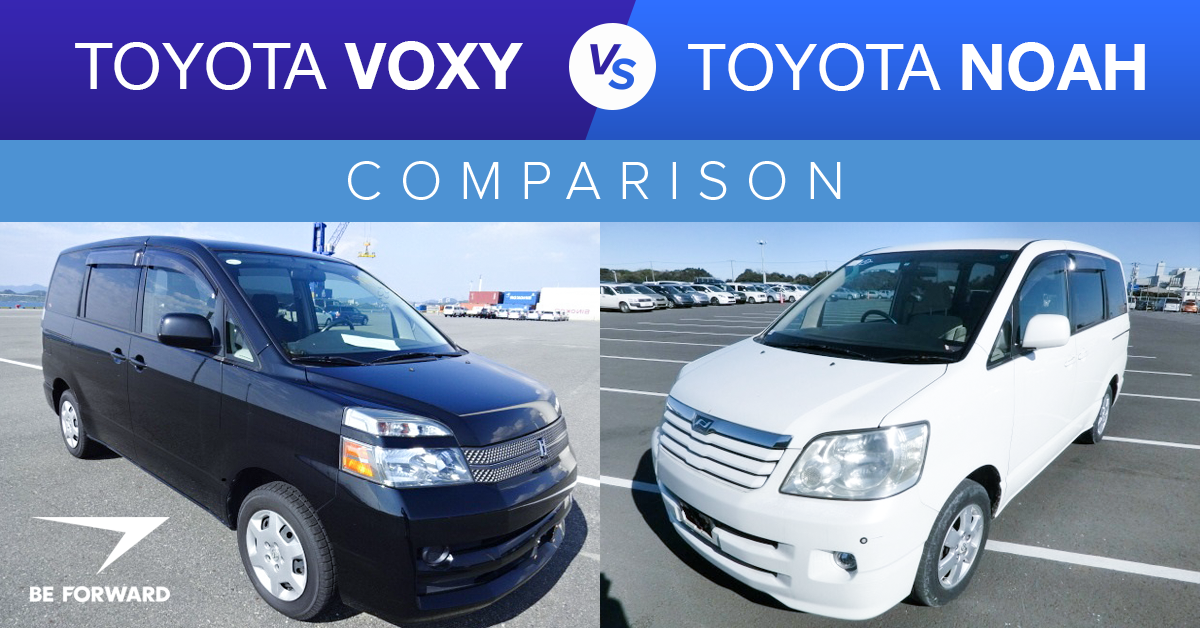 Toyota Voxy vs Noah may be a tough decision because of their similarities. Both the Toyota Voxy and Toyota Noah are perfect used minivans for bigger families on the move, but what are the differences that set them apart? In this Noah vs Voxy comparison review, we set out to see which is the best used minivan for you and your family.

Before we get started, here some key differences between the Toyota Voxy and Noah, from prices, fuel economy, engine performance, features and more.

Want to see for yourself how the Toyota Voxy and Noah match up? Check out our comparison video below.

What Makes the Toyota Voxy and Noah So Great?

The Toyota Voxy offers charming and interesting specifications and styling points as well as a dependable power train. The Voxy is highly rated by automotive professionals as well as previous and current owners, and is capable of seating up to seven or eight passengers. In addition to featuring a spacious cabin area, the Voxy offers outstanding cargo room.

It can be purchased in a front-engine/front-wheel drive (FF) layout or with full-time four-wheel drive (AWD). The average price of a used Toyota Voxy can range from around $300 to $5,200 depending on the model year, trim level, and options that are equipped. Available BE FORWARD stock can also affect prices at a given time.

Here’s what you get with a Toyota Voxy, and how much you should expect to pay for it with BE FORWARD.

The Toyota Voxy has enjoyed an impressive run through every year of its production. But the following model years in particular standout as milestones.

The Toyota Noah is often viewed as one of the most affordable minivans available. The Noah can also seat seven or eight passengers. In addition to great passenger room, the cargo area is large enough for all of the gear your family may need. The Noah’s styling points are quite stunning, designed to help you stand out from the crowd.

It is no wonder that the Toyota Noah is one of BE FORWARD’s best-selling minivans! It can be found in FF and AWD layouts and is equipped with a CVT for added fuel economy, giving the Toyota Noah an ideal fuel consumption. When looking at the price of the Noah vs Voxy, the price of a Noah can fall anywhere between $350 and $8,400 depending on the model year, trim level, available stock and equipped options.

Here are the basics that we’ve covered for the Toyota Noah so far.

Want to know the best model year to buy for the Toyota Noah? We’ve selected three that we are sure will bring you the most buyer satisfaction.

Both the Toyota Voxy and Noah impress while driving down the road, but which stands out more? Let’s take a look at the Noah vs Voxy in terms of exterior features to see which is better.

The exterior of the Toyota Voxy is an interesting study in form following function. Most minivans focus on aerodynamics, giving them a sleek, smooth look. The Voxy bucks that trend by featuring a somewhat boxy exterior that offers many interesting angles and surfaces. Despite its squarish appearance, the Voxy’s exterior incorporates many design features to reduce its overall drag coefficient.

The exterior of the Toyota Noah puts two thoughts in mind of the styling found with Toyota’s Scion badge: interesting and trend-setting. The rather shocking square jaw of the Noah belies the fact that the MPV is capable of up to 13.4 km/l. In early iterations, the Noah could have a two-tone paint job, but became monochromatic after the 2008 model year, a much more appealing paint scheme. In every aspect, the Toyota Noah has a modern and family oriented appearance.

The Toyota Voxy and Toyota Noah have been in production since 2001 over three generations. The majority of the units available on the used car market are from the second generation, so let’s have a look at the average interior and powertrain options, and how they differ for the Voxy vs Noah.

The interior of the Toyota Voxy is well thought out and driver-centric. All controls are within easy reach, allowing the driver to focus on the task at hand. The Voxy features power seats, which are conveniently arranged for easy access to all three rows. Second row seats swivel to the side for easy entrance and exit. The swiveling seats were designed to give easy access to parents loading small children, the elderly, and those in traditional dress.

The Voxy can be equipped with:

The second generation of the Toyota Voxy debuted for the 2007 model year with a 1,986 cc I4 that offers 153 bhp and 194 N-m of torque. That power plant was revised during a mid-cycle update. The displacement remained the same, but output was increased to 158 bhp and 195 N-m of torque. The fuel efficiency of the engine was increased exponentially with the addition of Valvematic technology. The only gearbox option available is a Super CVT-i.

The average fuel consumption of a Toyota Voxy ranges between around 12.6 km/L to 23.8 km/L, depending on the model year and generation.

The interior of the Toyota Noah is well designed, making the driver and each passenger feel as if they are the center of the van. As with the Voxy, the Noah features power seats and windows along with swiveling second row seats.

Other options can include:

The second-gen Toyota Noah offers a durable power-train and a well thought out interior. The Noah is powered by a 1,987cc 3ZR-FAE DI I4 Valvematic engine paired to Toyota’s dependable Super CVT-i gearbox. The result is an MPV capable of an average 13.4 km/l!

The average fuel consumption of a Toyota Noah ranges between around 12.6 km/L and  23.8 km/L, depending on the model year and generation.

Here’s a quick recap of what to expect in terms of features and engine performance between the Voxy vs Noah.

Toyota built the Voxy and the Noah on the same platform, so they offer identical underpinnings and suspension. Each offers responsive acceleration made even more surprising when you consider the engine is paired to a CVT. In some cases, an MPV is too tall or too narrow, creating undesirable body roll. This is not an issue with either the Voxy or the Noah. Each responds solidly in turns and while cornering. Overall, both minivans offer drivers the feeling of being in a spacious sedan more than being in a minivan.

One of the challenges many drivers face is needing low-end torque when entering traffic. Both the Toyota Voxy and the Toyota Noah offer full torque early in the curve for great low-speed acceleration. Each also offers the intriguing swiveling second row seating feature to emphasize their concentration on families. Further accentuating the family focus of these MPVs is the great fuel economy that they offer. Perhaps, the best feature of both MPVs is their driver-centric control layout. This allows the driver to focus on the road ahead, making them excellent choices for family safety.

When faced with two used minivans that are so well designed and affordable, your decision would normally come down to brand loyalty. That ”easy-out” doesn’t exist here—the two MPVs are almost complete equals. We found no significant differences between the Noah and Voxy, however the specifications and features of each model vary slightly. We hope that we have provided you with the information that you need to make a well informed buying decision. If you would like to see how the Noah stands up to its main competitor, you can read our car comparison of the Toyota Noah vs. the Nissan Serena.