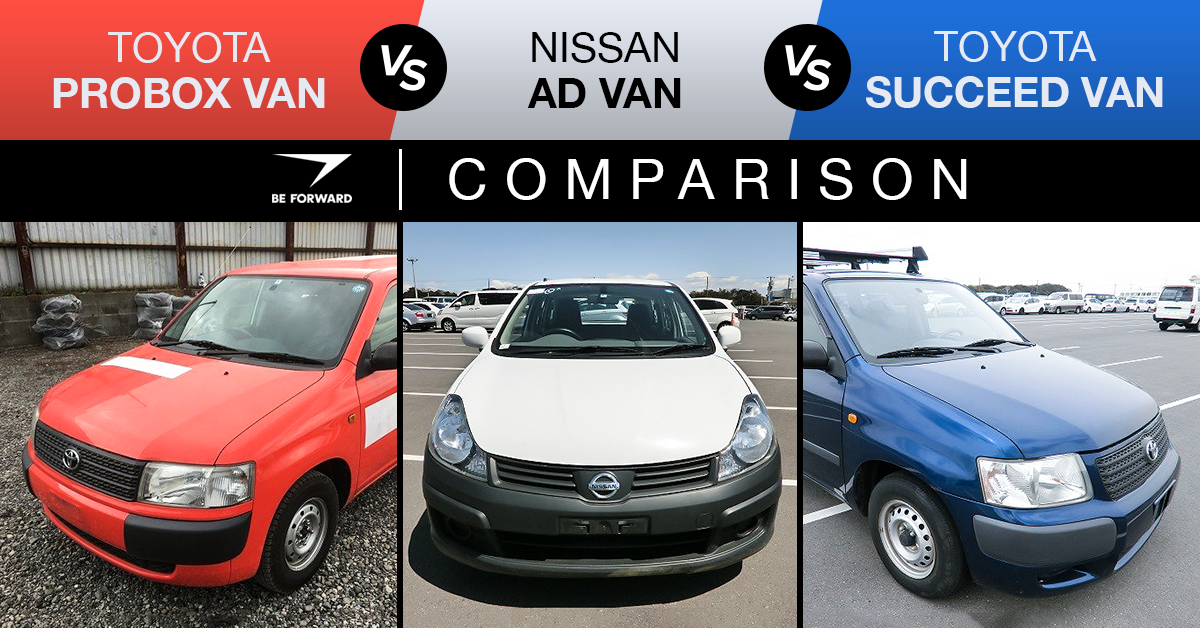 The demand for a small, reliable multipurpose van led to an influx on the market over the years, but three standout vehicles can be found in the Nissan Ad Van, Toyota Probox Van, and Toyota Succeed Van. These vehicles have several similarities as well as their fair share of differences. While many people may be driven by the aesthetics of these popular vans, there is more than meets the eye when it comes to the overall driving experience and what’s under the hood.

Between these three impressive, high-performance vans, which stands out more? Let’s take a closer side-by-side look to see what you’re getting from the Toyota Probox Van, the Toyota Succeed Van, and the Nissan Ad Van.

The Toyota Probox Van was launched in 2002. Since then, little has changed in either the exterior or the interior design. It generally comes in two engine sizes – 1.3-liter and 1.5 liter. The 1.3 liter engine is 2WD, while the 1.5-L one can be found in either 2WD or 4WD.

The Probox Van can be used both as a family or a business car. It is spacious and can seat five adults comfortably. When carrying goods, the second-row seats can be folded flat, but cannot be split.

Similar to the Toyota Probox Van, the Toyota Succeed Van was also launched in 2002 and has since then been marketed as a midsize wagon. In comparison to the Probox Van it offers a number of additional features which are detailed further below.

The Succeed can also be used as family or a business vehicle, but it is more often than not used as a passenger car. It is mostly available with a 1.5-liter engine.

The Nissan Ad Van is a compact wagon made for passenger ferrying and business and has been in production the longest compared to the Probox Van and Succeed Van, with its first models being produced in 1982.

Over the years this popular model has continued to improve in looks and features. Today, the Nissan Ad Van is still popular with small delivery businesses as well being used as a passenger car.

When it comes to overall size, the Toyota Probox Van is, to an extent, noticeably smaller than the Succeed Van: the weight of a Succeed Van averages at around 1,140kg, while the Probox Van is around 1,000kg.

The level of interior comfort between each van is also slightly different. While the Nissan Ad Van and Toyota Succeed Van are more oriented for transporting passengers, the Toyota Probox Van is more associated with transporting cargo, with passenger comfort taken into consideration secondarily.

The Toyota Probox Van’s engine specifications are different from that of the Toyota Succeed Van and the Nissan Ad Van. For example, engine sizes start at 1300cc displacement, with 1400cc and 1500cc for the 2WD and 4WD models. The Toyota Succeed Van’s engine specifications are between only two: 1400cc and 1500cc displacements, which you can find either on the 2WD or 4WD Succeed vans. Engine types for both vehicles are 1NZ, 2NZ or CNG.

Generally, the Nissan Ad Van uses a 1.3-liter QG13DE, 1.5-liter QG15DE or 1.8-liter QG18DE engine. The latter is mated to a 4-speed automatic gearbox and all time 4WD, giving it an extra edge over the Probox Van and Succeed Van.

The average fuel consumption of a Toyota Succeed Van is close to 15km/l, while a Toyota Probox Van using a 1.3-liter engine reaches an average of 18km/l.

A Nissan Ad Van using a 1.3-liter engine maintains a fuel consumption level of around 12km/l. In comparison to the Toyota twins the Nissan Ad Van falls slightly short, which may be due in part to the stronger engine in some models.

How do these popular vans compare on the inside? Read below to see what types of features and comfort options are offered by each.

The Probox Van focuses on function over form, and its popularity is a testament to the fact it does its intended job well. Inside you won’t find any unnecessary luxuries, but instead a more simplified cabin, instrument panel, and array of standard features.

A plus point is the amount of legroom for both front and rear passengers, which is surprisingly roomy. Additionally, the rear seats are foldable when needed to create more room for larger cargo.

The Succeed Van was built more so with ferrying passengers in mind than the Probox Van, and that is perhaps why its offers more comfort-oriented features within its interior.

Its rear seat is slightly more plush, as are the front passenger and driver seats. Its other points, however, are similar to the Probox Van, including a generous amount of legroom for all passengers.

Among the three vehicles here, the Nissan Ad Van offers arguably the most appealing interior thanks to its supportive seating, higher-quality accents, and overall ergonomics.

Having evolved over a longer period of time in comparison to the Toyota Succeed Van and Probox Van, Nissan have been able to make design and feature tweaks according to user needs and requests which has further added weight to its popularity.

From style to functionality, the Ad Van, Probox Van and Succeed Van offer something a little different. Keep reading to discover which best matches your personal taste.

This is a 5-door wagon, which has a decent amount of ground clearance to help it clear speed bumps and other obstacles with relative ease. Other notable design features include 14-inch tires with steel rims, a well-pronounced grill, and a signature two-tone front bumper.

As a close sister to the Probox Van, you will find similar Succeed Van aesthetics, right down to the same bumper and grille design. However, the Succeed is designed as a 5 or 6-seater van, which gives it a slightly longer length.

Like the Probox Van, the Succeed Van offers 14-inch tires, a good amount of ground clearance, and an easily accessible lift gate. For those with a keen eye, you will also notice that the Succeed Van’s rear lights are slightly more boxy in comparison to its sister.

This is in part due to its choice of design: a hatchback-like front bonnet, headlights, and grill in addition to its curved rear tailgate and sides.

BE FORWARD: Find Your Next Japanese Used Van

In addition to the Toyota Probox Van, Toyota Succeed Van, and Nissan Ad Van, BE FORWARD offer hundreds of other high-quality, low-cost used vans. Tap or click the button below to browse our current selection on offer.

Browse All BE FORWARD Van Models