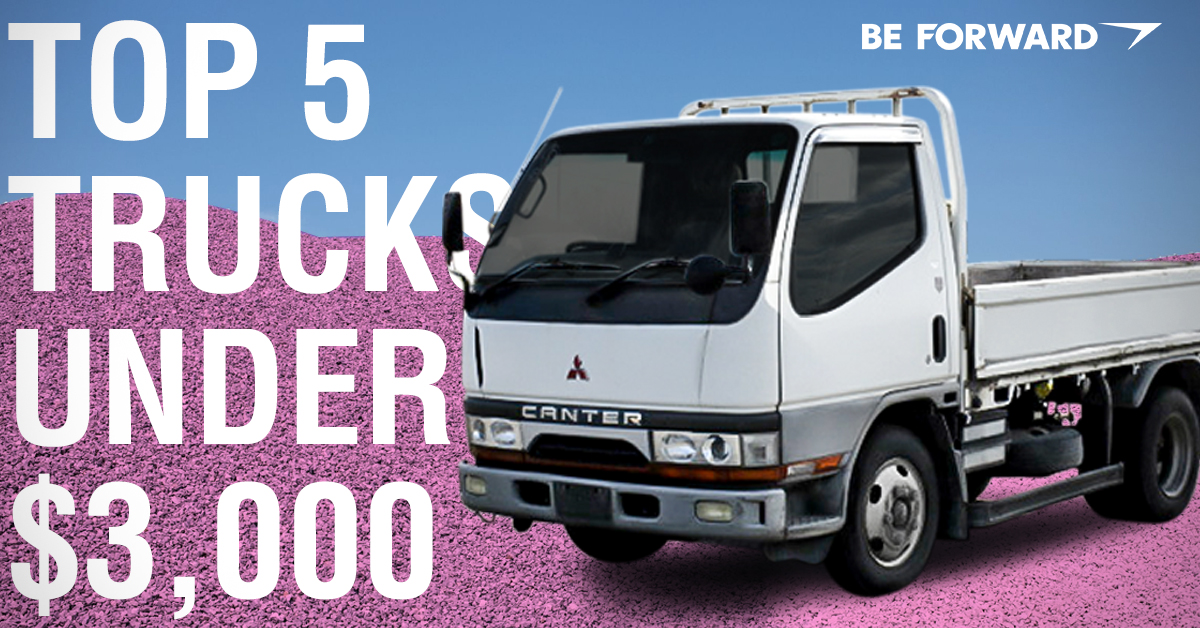 Buying a truck is an important decision for many kinds of businesses. There are many things to consider, but one that is often considered above all others is price. What might come as a surprise is that there are many high-quality, low-cost used trucks that you can buy right now for under $3,000!

Whether you are starting a business or are expanding an established one, a secondhand truck is what you need to take your company to the next level. To get you started, here are 5 of the best used trucks you can buy on BE FORWARD for under $3,000. 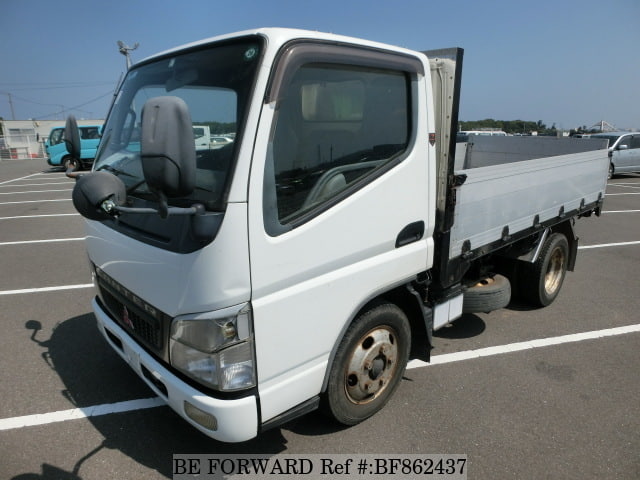 The Mitsubishi Canter is nifty and reliable truck for any business looking for a means of transporting cargo up to a maximum of around 3,000 kg. While other trucks of this size come in either manual or automatic transmissions, this compact 3-ton truck offers a semi-automatic transmission in addition to its six wheels and two-seater cab. It is perfect for moving cargo from one place to another fast, and you can use it for both long distance or metropolitan deliveries. 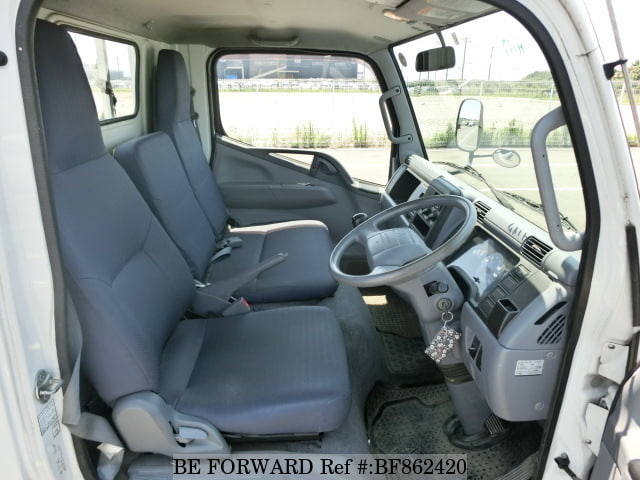 Above: Interior of a used 2010 Mitsubishi Canter

The Canter runs on diesel fuel, with an average displacement of 2650cc to 4890cc. You will also find that this truck comes mostly in a 6-speed manual, 5-speed automatic or, as mentioned above, a unique semi-automatic transmission. The average fuel consumption of a Canter is roughly 6.5km/l, with a fuel tank capacity of around 100 liters. 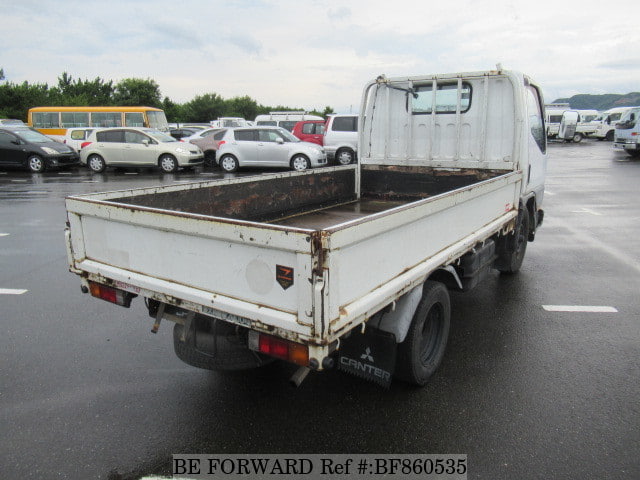 Above: Rear of a used 1995 Mitsubishi Canter

The Mitsubishi Canter offers a number of variations across its models including a full or half cover body, in addition to a tipper model. Having been in production since 1963, the Mitsubishi Canter has proved itself to only get better with time, and just like a horse, it will help your business “canter” from one level to the next. Today you will find different models under the Canter flagship, including the Fuso. 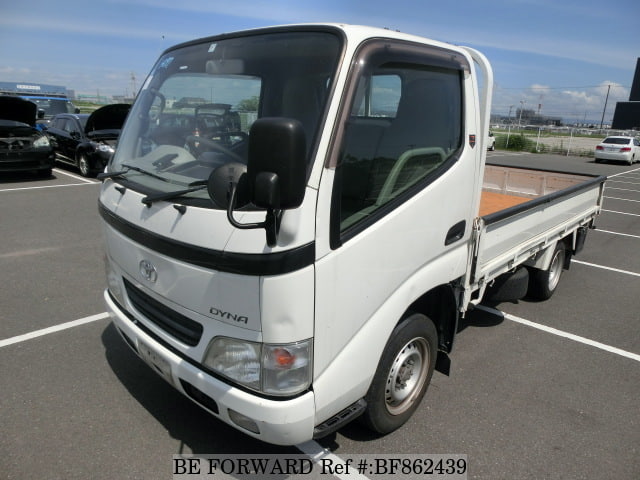 The Toyota Dyna Truck is a common sight on the roads and has been for some time, and is a close competitor to the Mitsubishi Canter for the world’s most popular small truck. 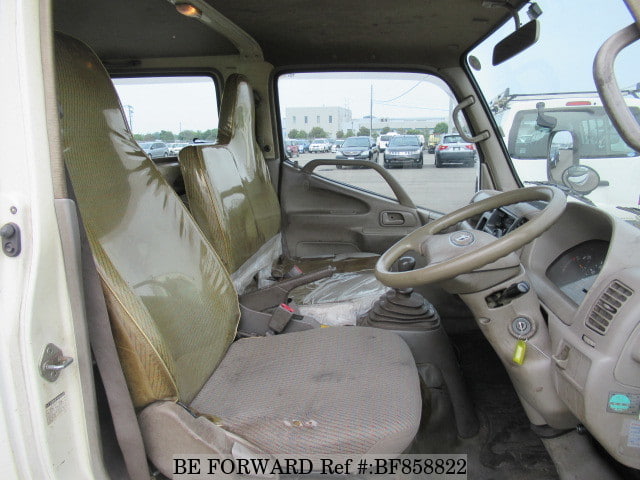 Above: Interior of a used 2004 Toyota Dyna Truck

Since 1959, Toyota has been making both Dyna Truck and Dyna Van variations. The Dyna Truck comes with a single or double cabin and offers a 4×4 or 2-by-4 drivetrain that is powered by petrol or diesel. Examples of popular models include the Dyna 100 or the Dyna 150, both of which are small capacity trucks that are perfect for commercial purposes. The Dyna Truck can carry an average weight capacity of up to a maximum of 3,500kg, and its average fuel consumption is roughly 4.3km/l with a fuel tank capacity of 60 liters. 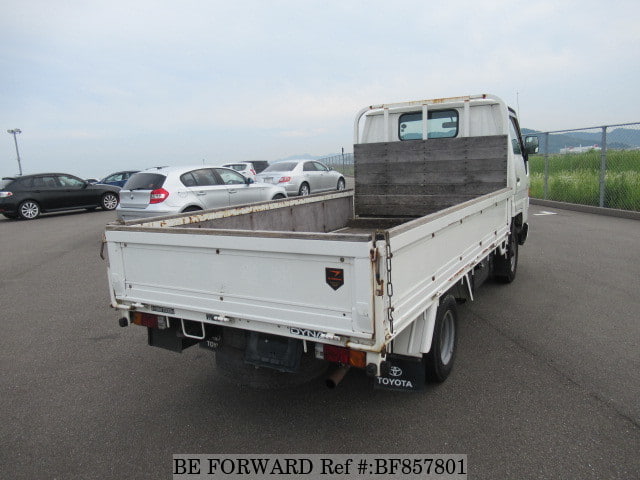 Above: Rear of a used 1999 Toyota Dyna Truck

Like the other trucks on this list, the Dyna Truck offers a number of body variations including a box body, flatbed body, or pickup body type. All body types have a driver airbag available, and on each side of the cabin there is a side impact protection beam that improves the overall safety. 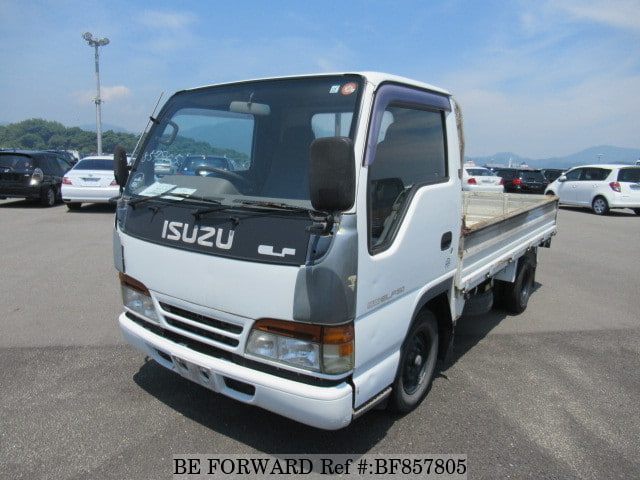 When considering a solid truck that is under $3,000, the Isuzu Elf Truck is a popular option. This medium-duty truck has been in production by Isuzu since 1959, and today this truck comes with a 4×4 drivetrain and a large open cargo space. In many instances, the Elf Truck has even been converted into a commuter bus with a seating capacity of up to 19 people. 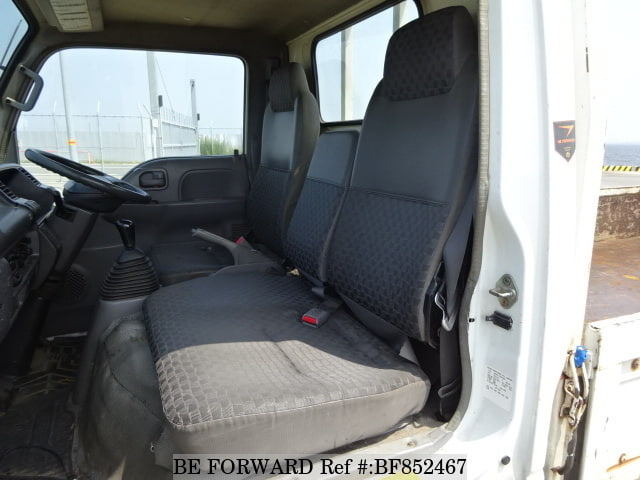 With many models powered by a powerful 4HK1-TC engine, this truck is indeed powerful, comfortable, and saves a lot on fuel. Its fuel is diesel, with a consumption that has been averaged at close to 4.5km/l, similar to that of the Dyna, with a tank capacity of between 75 to 100 liters. 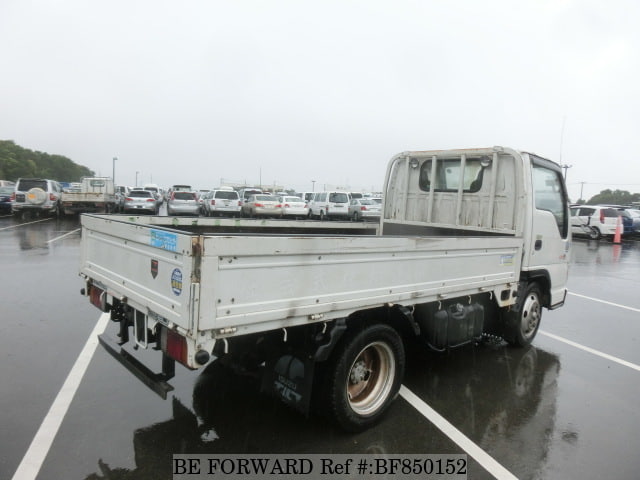 As a compact medium-duty truck, the Isuzu Elf Truck is easy to maneuver in, around, and out of town. Thus, it can easily be used for supermarket deliveries, farm produce transportation, and more. As a 4-wheel drive truck, its road grip is also almost perfect even when driving in rougher conditions. This truck is available in both box and open load carrier body types, and if fitted with a fiber cover body, it will still be light enough to carry a lot of weight. 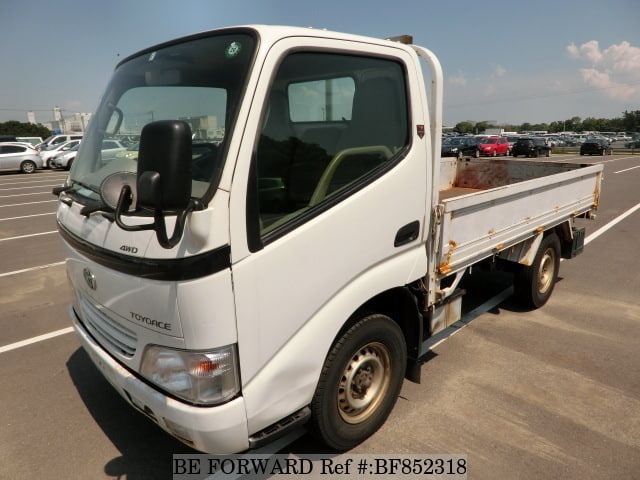 The Toyota ToyoAce is another popular truck from Toyota’s range. For many decades, this series of light-duty and medium-duty trucks have been in production making life better for businesses. In different markets, this truck series has been marketed as the Toyopet Light Truck SKB, Toyota Dyna, Daihatsu Delta, and others. 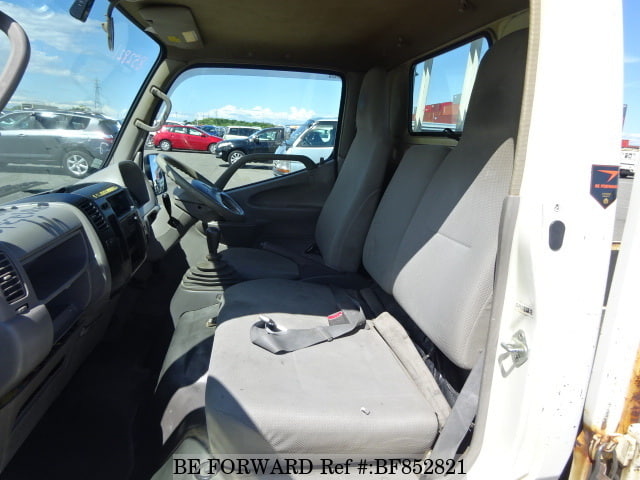 Above: Interior of a used 2010 Toyota ToyoAce

The first generation ToyoAce comes with a 1-liter engine (995cc) and looks similar to a pickup truck. It has a loading capacity of up to roughly 1,000 kg. The second generation ToyoAce has a 1-liter engine and was built in a semi cab over design, while the third generation was built with a bigger 1.6-liter engine. The fourth and fifth generation models would also come with big engines at 1,626cc. On average, the fuel consumption for a Toyota ToyoAce is roughly 11km/l on its 80-liter tank capacity. Today, you are more likely to find used models made in the 2000s, with the single cabin being more common, a big load bed, or perhaps a full cover body. 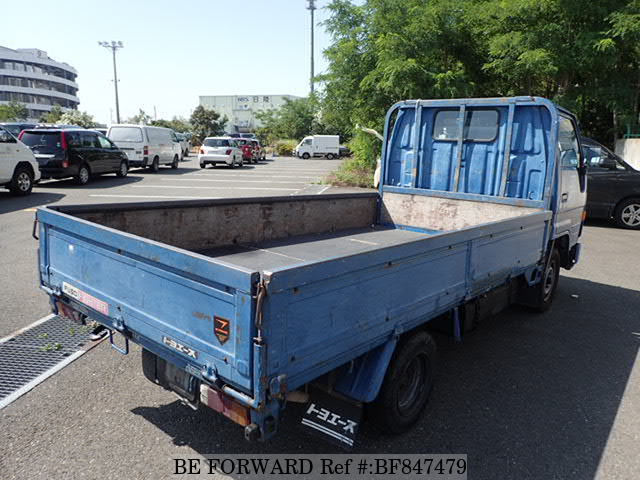 Above: Rear of a used 1993 Toyota ToyoAce

ToyoAce Trucks look good, with a spacious and comfortable cabin that features convenient storage. Other features that you can expect include a three-seater capacity, two doors, and big tires for better grip on the road. Safety features include ABS brakes, an airbag for the driver, and side impact beams on the cabin’s exterior. 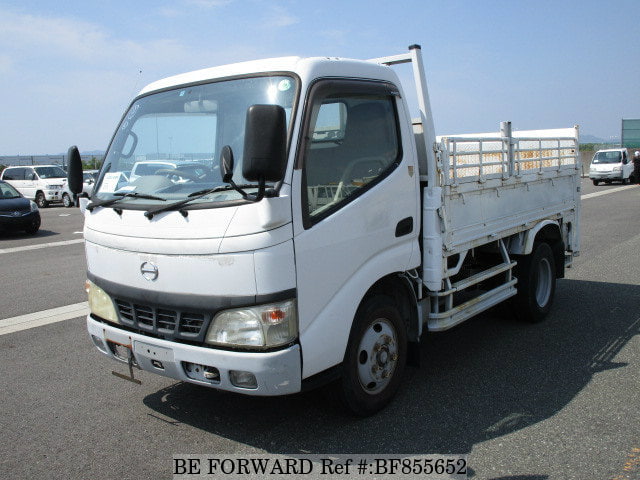 The Hino Dutro Truck is regarded as a twin to the Toyota Dyna Truck and as such they share many features. One of the things that they share is a cab over design, and a big 3.0-liter engine. With a loading capacity of roughly 1,360kg, this small truck is good for businesses that need to move modest loads from point A to B with relative ease, while also being good for long distance driving. 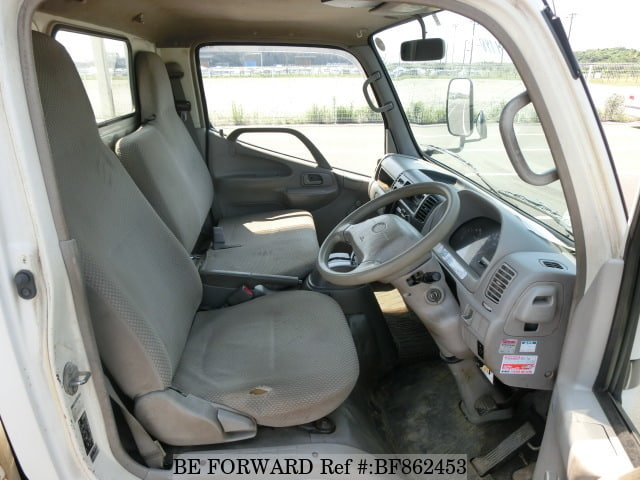 Above: Interior of a used 2005 Hino Dutro Truck

You will most probably find this popular truck with a 6-speed manual transmission, however later models of the Hino Dutro Truck also come with a 5-speed automatic transmission option. The diesel engine is more popular than the petrol engine, and the average fuel consumption is 5.2km/l with its fuel tank capacity at 70 liters. 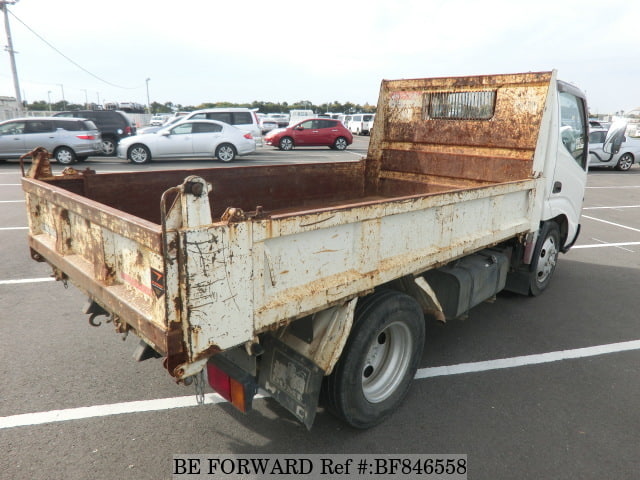 The cabin looks good from the outside, but inside only standard features are offered. These include storage compartments, driver airbag, comfortable seats, and a three-seater capacity— albeit with a slightly cramped middle seat—available. Additionally, the instrument panel is designed for a standard cab size, ground clearance is good, and the large tires offer better grip across various kinds of terrain.

Which Used Truck is Best for You?

If you are looking for a big load capacity, the Mitsubishi Canter or Toyota Dyna Truck may be the best choices for you. If you would like a medium-duty truck that looks good and can do the job for many years, you could opt for the Isuzu Elf Truck. With load capacities ranging from 3,000kg to 3,500kg, you can move heavier amounts of cargo easily. In addition, these trucks are available in tipper as well as drop side options, although such features may be ex-factory.

The Toyota Dyna Truck is not known for performance and the Hino Dutro has a smaller load capacity, though it is a good looking vehicle. If you are conscious of fuel consumption, the Toyota ToyoAce comes in as the most fuel efficient.

Spare parts for all the trucks listed here are readily available as these have been made by popular brands, so no matter which model you use you are sure to find the appropriate parts. However, if one were to be picky, depending on where you do business you might consider the slightly pricier but better endowed Isuzu Elf Truck.

BE FORWARD: Your Source for Low-cost High-Quality Used Trucks & More

If you are looking for even more quality used trucks to consider in addition to those detailed above, click or tap the button below to browse BE FORWARD’s current selection of used trucks now.