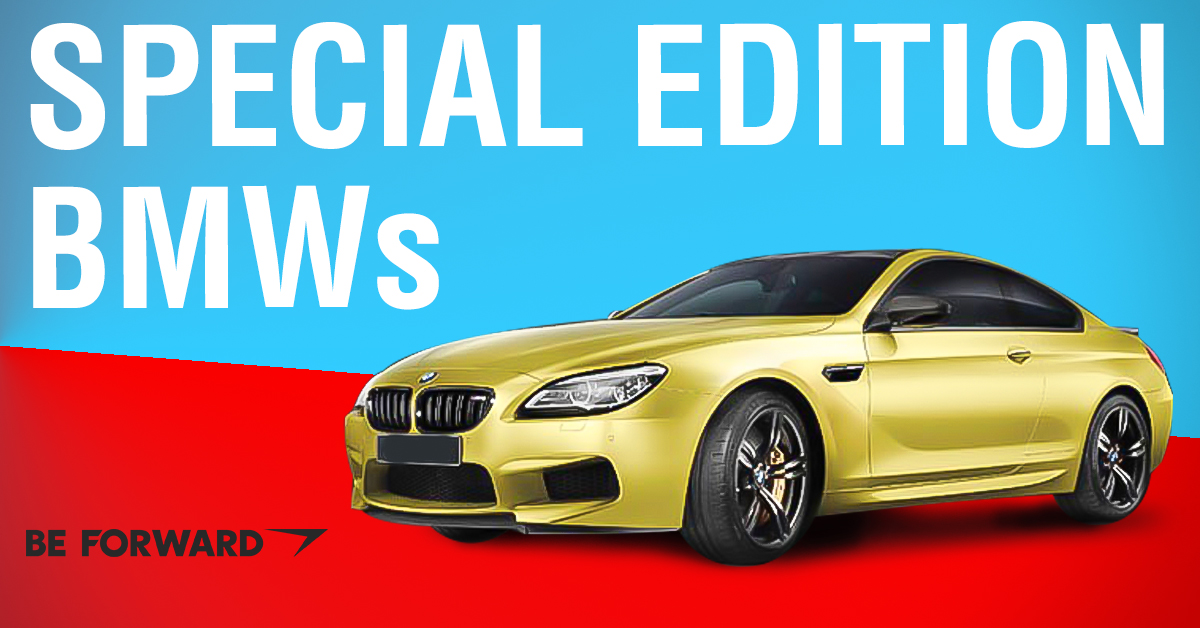 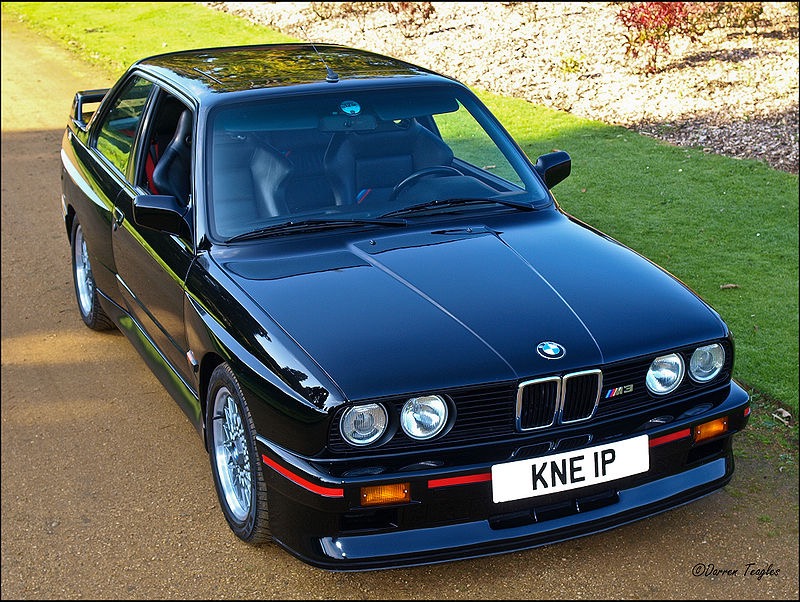 Bayerische Motoren Werke AG has built many iconic cars over the course of a century of production. Among those, the BMW 3-series has often been cited as the single line-up that truly made BMW an international success, not just another boutique luxury manufacturer. Today, the 3-series accounts for more than thirty percent of BMWs worldwide sales. As with many BMW offerings, a true sport edition was designed and, viola, the M3 was debuted for the 1986 model year. To celebrate 30 years of the M3, BMW has released four special edition models; two M3s, an i8, and an M6. Let’s have a look at the first M3, then each of the special edition models.

The first M3 debuted for the 1986 model year and was based on the BMW E30. The first cars produced  were powered by BMW’s S14B20 engine that was capable of 189 bhp. Later, the S14EVO2 engine was used, boosting power to 217 bhp. The engines were paired to one of two Getrag 265 5-speed gearboxes. The M3 Evolution(pictured above) offered many changes from the base 3-series. These included larger wheels, thinner window glass, a lightweight boot lid, and an optional rear spoiler.

For the M3, the E30 body was modified to offer better performance. While using the same unibody shell, the M3 was given 12 unique body panels to improve aerodynamics and ”box-flared” wheel-arches for the wider tyres used. The suspension was changed to boost performance and driver appeal. BMW installed solid rubber offset control arm bushings, aluminium control arms, and used the bolt on kingpins and sway bars seen on the E28 5-series. To accommodate the added power of the M3, the braking system had to be improved. This was done with larger, more durable front and rear brake calipers, improved rotors, and a more powerful master cylinder.

BMW also offered the M3 Sport Evolution, limiting production to 1,368 units. This model was powered by the S14EVO3 engine that thrust 238 bhp to the drive wheels. Other upgrades were larger front bumper openings, a multi-position front splitter, an adjustable rear spoiler, and brake cooling ducts. 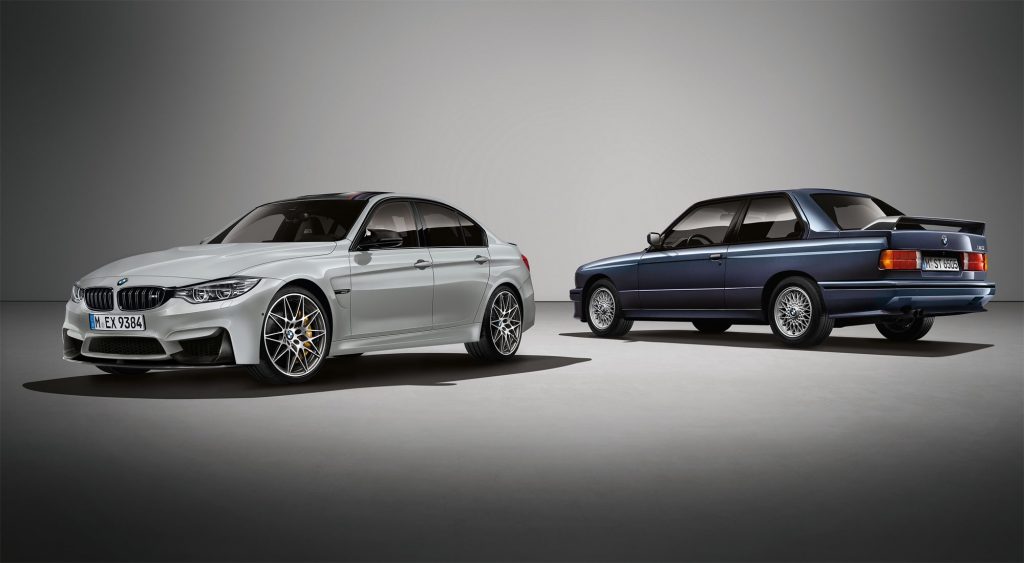 As part of the celebration of the M3’s thirtieth birthday, BMW is releasing 4 limited edition models. Two M3s, an i8, and an M6. The M3s have been dubbed the ”30 Years M3” and the ”M3 30 Jahre”(pictured above). There will only be 30 of the M3 30 Jahre built and all will be sold in the U.K, but the 30 Years M3 will have a 500 unit production run and will be released worldwide.

The 30 Years M3 will stand out by being offered in a single color;  Macao Blue metallic. That colour is significant in that it was the first colour offered in the M3 lineup way back in 1986. This special edition run will be further distinguished by only being available with BMW’s Competition package. That means it will be powered by an I6 that forces 450 bhp to the pavement. Other fun bits are an adaptive suspension; M Sport seats; 30 Years M3 badging on the front doorsills and in the front head rests; a sumptuous Merino leather interior; and forged  alloy wheels. Buyers will be able to order either a six-speed manual or a seven-speed twin-clutch automatic gearbox.

The M3 30 Jahre will also be equipped with the Competition package and all of the other fun bits the 30 Years M3 will have. The only gearbox offered is a seven-speed twin-clutch automatic. The single colour available on the Jahre is a spectacular Frozen Silver metallic. Other interesting additions to the Jahre are an M sport exhaust system and a slue of carbon fiber fobs, knobs, and goodies. The list of carbon fiber parts include: the front splitter, mirror caps, rear diffuser, and rear spoiler. Moving inside, a buyer will find M Sports seats, BMW M color strips woven into the seatbelts, M3 30 Jahre badging on the front door sills and front seat headrests, and outstanding Merino leather upholstery that mirrors the 30 Years M3. Just for fun, BMW equipped the Jahre with carbon ceramic brakes, adaptive LED headlights, a HUD, a surround view camera, and keyless entry and start. 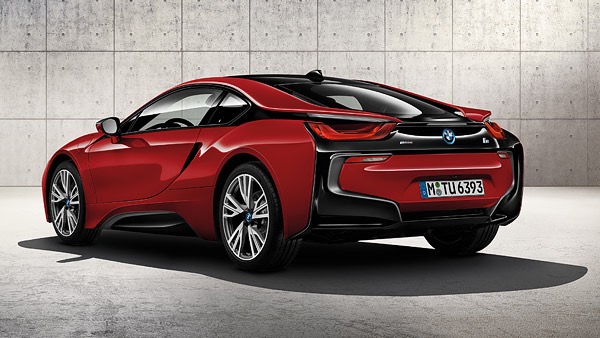 The Japanese market will see two special editions: the i8 Protonic Red Edition and the M6 Celebration Edition. The M6 is as much a celebration of the theM3’s thirtieth as it is BMW’s 100th. Each of these editions are extremely limited. There will only be 20 of the i8’s built and just 13 of the M6. There should be quite a bidding war going on!

On its website, BMW touts the i8 Protonic Red Edition as ”…an unparalleled design icon. The expressive exterior paintwork and the sporty interior atmosphere emphasis the unmistakable sports-car genes of the BMW i8 – and awaken a yearning for racy journeys full of tight bends”. A production i8 is powered by a 1,499 cc I3 turbo B38A15T0 engine that offers 228 bhp and 320 N·m of torque. The Protonic Red Edition will have a modified engine that boosts output to 362 bhp and 570 N·m of torque.  The exterior is bathed in the intense Protonic Red. Additionally, buyers will be treated to BMW’s laser headlights and red on black interior upholstery.

The M6 Celebration Edition will feature the Competition package. In the M6, the package will boost the V8’s power output to a G-force inducing 600 bhp and 700 N-m of torque. The M6 Celebration Edition will also feature carbon ceramic brakes, lightweight alloy wheels, that luxurious Merino leather that seems to dominate BMW special editions(with yellow stitching this time), an M Sport steering wheel and exhaust system, and carbon fiber bits that include: side mirror covers, rear spoiler, and rear diffuser. There is just one color available: Austin Yellow. 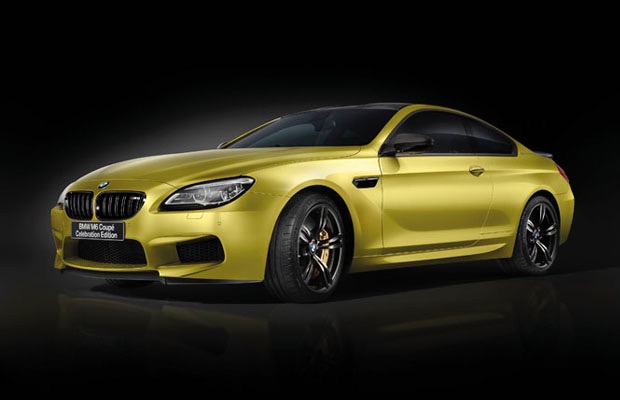 Our congratulations go out to BMW for 30 years of M3 production and 100 years of bringing us great luxury cars.