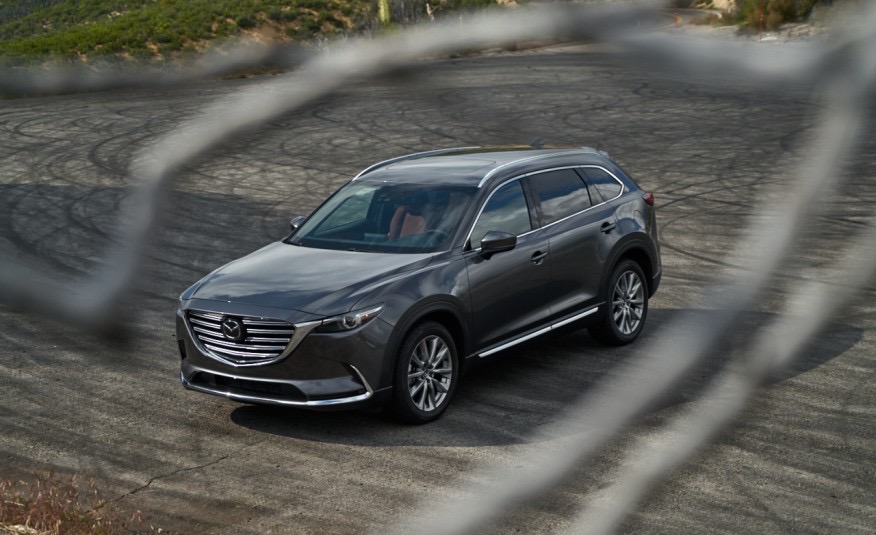 Most of us would prefer to fill our weekends by cruising in a BMW M4, Mercedes-AMG anything, or a  nice Audi R8. All great cars to conquer miles of pavement as quickly and nimbly as possible; however, none are practical for carrying the family to and fro. For the average man, weekend road trips usually mean family outings; so practical is the word of the day. Practical is three rows, quiet, and plenty of cargo space. Practical doesn’t scream ”mid-life crisis in progress” to our neighbors. Even so, we do not necessarily want practical to mean boring or under-powered. Let’s have a look at the 2016 Mazda CX-9 to see if it can address some of the more boring aspects of a three-row family hauler.

The 2016 Mazda CX-9 is a complete revision. It borrows a few design paradigms from the CX-5, while taking several cues from the Infiniti QX70. Part of the new CX-9’s appeal comes from its subtle styling. With a grille that juts forward with pride, the body seems to have been modeled with nothing other than restraint in mind. Somewhat like a runway model, the CX-9 has presence and style that rival more expensive offerings like the Acura MDX or the Infiniti QX60. 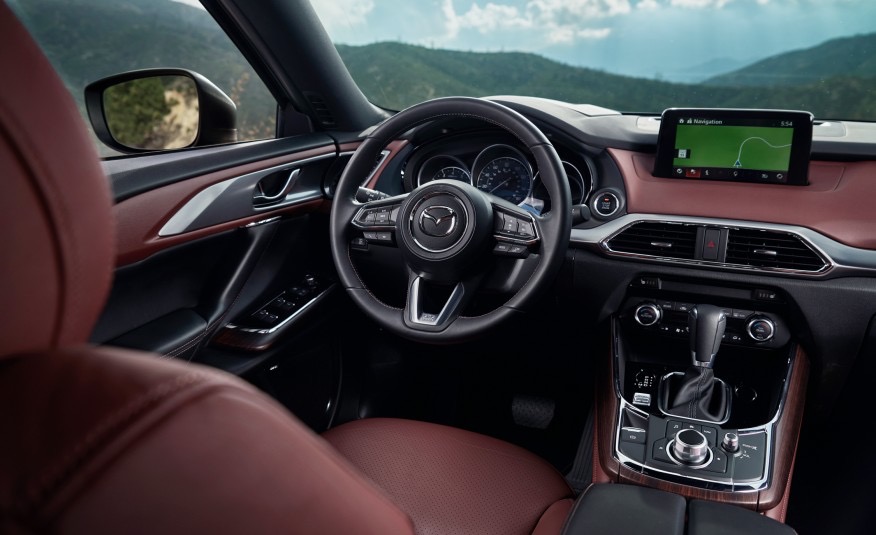 The interior follows the same storyline. The materials were chosen to offer a rich feel. The plastics are finely grained and soft to the touch, bordering on leather. The top trim levels offer open-pore rosewood trim, aluminium accents, and Nappa leather seats. For 2016, Mazda has gone the extra mile to reduce cabin noise. To start, every interior gap is tight and the entire floorpan is thicker. Additionally, there are 24 kg of sound deadening under the carpet to help out the acoustically laminated windscreen and front windows. The new sound deadening measures lower the CX-9’s interior to 65 decibels when traveling at 110 km/h, the exact same as the Tesla Model X.

The instrument panel, like all Mazda offerings, is a cluster of round analog dials, but one dial does offer a color LCD screen that can include trip information and a compass, depending on the trim level you chose. There is a nice-sized touchscreen at center console. It is placed just out of convenient reach while driving, but it can be controlled from a knob near the shifter…a similar setup can be seen in the BMW iDrive. The nav and audio controls are easy to use from either the touchscreen or the knob.

The second row can easily accommodate adults when the split bench is fully extended; however, there are some legroom issues when there are passengers in the third-row seat. The split bench is the only option for second row seating where many of the CX-9’s competitors offer captain’s chairs. The split bench does fold completely down for easy access to the third row seat. Having a third row is a great, but Mazda did fall short with this one. While it is kid-friendly, you are not going to fit an adult back there. The third seat also folds down for added cargo space. With it up, you have 14 cubic feet of cargo space. With it down, there is 38 cubic feet available. Unfortunately, Mazda did not incorporate power folding seats and the cargo space lags behind most of the CX-9’s competitors.

One of the biggest complaints about the previous generation of the CX-9 is that it lacked zoom-zoom.

The current CX-9 makes due with a turbo four, where the competition is powered by a V6 or larger. The turbo four is capable of 250 bhp and has a 0-100 km/h time of 7.2 seconds. Where the CX-9 shines is low-end torque. It produces 420 N-m of torque at 2,000 rpm. The low-end torque gives the CX-9 a nice shove from the blocks and great spurts in heavy traffic. Throttle response is excellent with boost that builds instantly. Mazda attributes that to the new Dynamic Pressure Turbo system. Mazda also touts weight reduction from the new engine, a drop of 100 kg from the previous generation. The new engine has fuel economy numbers of 9.4 km/l city and 11.9 km/l on the highway. 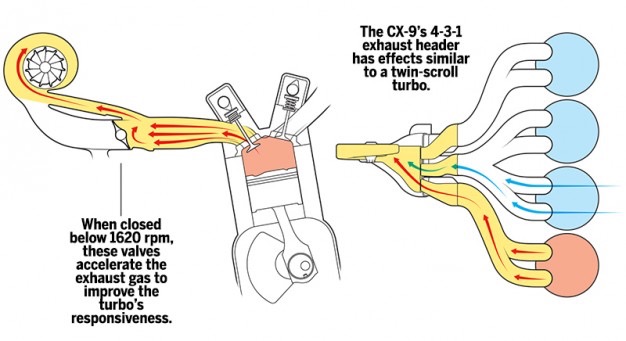 The Dynamic Pressure Turbo system fitted to the new Mazda CX-9 is an interesting combination of twin-scroll and variable-geometry turbos. As with a variable-geometry turbo, the system constrains exhaust flow at low rpm to accelerate the gases. Unlike a variable geometry system, the constraint is not done inside the turbo housing, but in a valve body between the cylinder head and the turbocharger. When the engine is idling below 1620 rpm, all three valves are closed, forcing exhaust into passages above the three butterflies, improving low-rpm responsiveness.

As to the twin-scroll aspects of the system. The system separates waste gases into three channels with a 4-3-1 exhaust manifold. The inner cylinders exhaust into a common runner, but the two outer cylinders exhaust through individual pipes. This separation has two effects: first, it scavenges fast-moving exhaust gases to draw out any leftover low-pressure waste gas; and, secondly, the turbocharger is hit with more evenly metered pulses. Those pulses improve responsiveness and reduce turbo lag.

Overall, the 2016 Mazda CX-9 is a responsive three-seat option that is well appointed. On one hand it is perhaps the most fun-to-drive vehicle in its class, on the other it is smaller than most of its competitors. It is also less expensive than most of its competitors. Even fully-loaded with options, it is a few thousand quid less than the alternatives built by Honda and Ford.