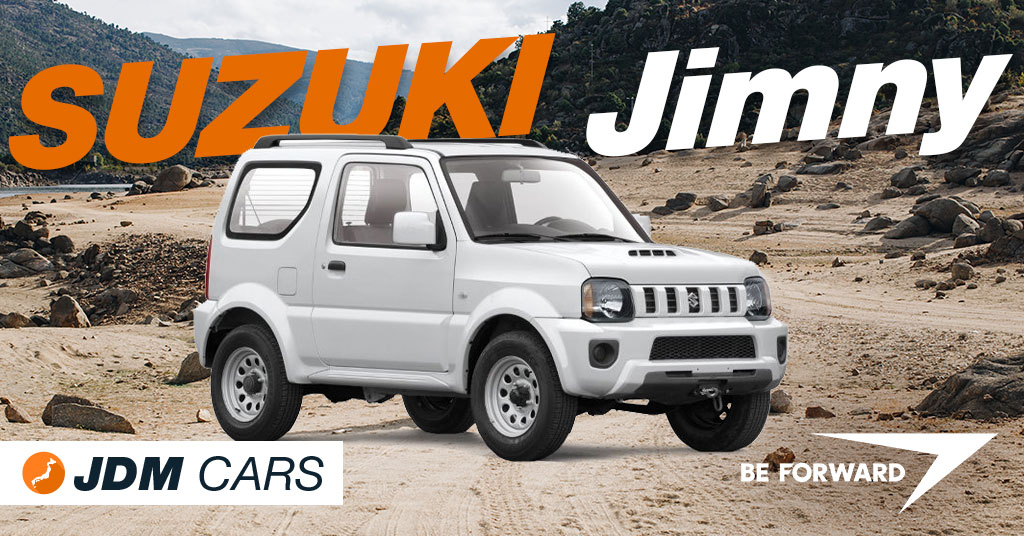 The price of used Suzuki Jimny in the market varies from version, trim, and dealers while prices are reflective of average BE FORWARD prices as of June 2021 starting from USD 800.

Suzuki Jimny (also known as LJ in the 70’s, Samurai in the 80’s, Caribian and Sierra in other markets) is a 4×4 off-road mini SUV manufactured by the Japanese company Suzuki and its subsidiaries worldwide. The car was first produced in 1970 and production continues to date, the most current being the 2018 model. After all these years of production, several models, four generations (1st generation 1970 – 1981, 2nd generation 1981 – 1998, 3rd generation 1998 – 2018, 4th generation 2018 to present), and 2.85 million units sold, the Jimny has proved to be and still is a desirable car. Let us learn why.

The Suzuki Jimny originally fell in the KEI (smallest highway-legal passenger car) car in Japan, with a length of approximately 3m (the following versions had a length of 3.6m) and a width of 1.6m. These dimensions make it a very convenient car for urban use, as it can fit in small parking areas, and maneuver on tiny spaces. But the Jimny was not meant for on-road and in urban centers only. It was also built to tackle the harshest weather and terrain. It has proved for years its undiluted capabilities in off-roading, thanks to its 4×4 abilities, front and rear rigid axles, low gear with abilities that match or even outclass much bigger SUVs when it comes to managing through snow, muddy terrains, and climbing steep slopes. Be it ice, mud, or sand, uphill or downhill, the Jimny goes where other much bigger 4×4 SUVs fear to tread. Buy a Jimny and get ready to take on nature’s challenges.

The Suzuki Jimny has been produced with various body types over the years, which gives buyers several options to choose from depending on their tastes. The body types include:

Half-door Convertible this can be driven with or without a roof in place. It can give the user an open-air driving experience and fun with the ability to provide a roof when required. Other bodies types are three-door hardtop, three-door, and raised-roof hardtop.

The interior is well designed with 4 seats, ISOFIX child seat mountings on the rear seats, and headrests. The seats offer enough legroom and head, but they are not desirable for longer trips as they are not so comfortable. The seats are trimmed in either synthetic leather or cloth. Controls are well placed for ease of use and access. Storage facilities include a glove box, door pockets, and a tray.

Space has always been perfect but it’s strikingly better in the all-new version of the boxy off-roader. As the driver, you won’t have to be suspicious of your elbows hitting the windows when making a full turn, plus the cabin pays an open feeling – brought about by the boxy styling and vast windows.

This is a very small car and the overriding first impression when you are into a Jimny. The small cabin is basically equipped, although well finished with the typical Japanese attention to detail. However, the cabin is fairly tall, and the upright seating position gives good sight over the bonnet and out to the sides of the car. The steering wheel only adjusts up and down but the driver’s seat is comfortable.

The Jimny is easy and light to drive, especially as an automatic. Its compact size and great vision make it particularly easy to maneuver in small car parks and the likes, something that drivers who are not very confident or inexperienced will appreciate.

The new Jimny is more attractive inside than before and it’s just as easy to use as ever. The most important controls are lumpy enough to use while wearing gloves, while the dials are big, easy, and bold to read. Materials used are more pleasant to the touch than before, without feeling any less tough than they need to be.

A look at the old-fashioned interior of the previous Jimny highlights just how necessary an overhaul was. The new Jimny doesn’t opt for style over substance, but many will still find Suzuki’s interior rather light on luxuries and equipment compared to competitors.

The latest Jimny has made a big step forwards from its successor when it comes to comfort, but its purposely straightforward design inside-out prevents it from matching more fashion-led competitors.

Like other cars powered by standard features like central locking, Suzuki Jimny can lock the doors by pressing a key-fob button and Climate control air-conditioning. Also, it comes with a 7.0-inch multimedia screen with reversing camera display, Apple Android/CarPlay Auto smartphone mirroring, and satellite navigation.

Suzuki JIMNY is powered by part-time 4-wheel drive, with dual-range gearing which allows the driver to drive comfortably at very low speeds off-road.

The exterior features front fog lamps, LED headlights with high-beam assist, and 15-inch alloy wheels, which are lighter than wheels made of steel.

As grisly as the heading above is, it’s really the choice you’ll have to make if you’re bringing the new Jimny to a long road trip. The cargo space behind the back seats is limited to just a large 3-day duffel bag and maybe a knapsack, but it won’t be enough luggage space for 4 people.

ALL SUZUKI JIMNY FOR SALE