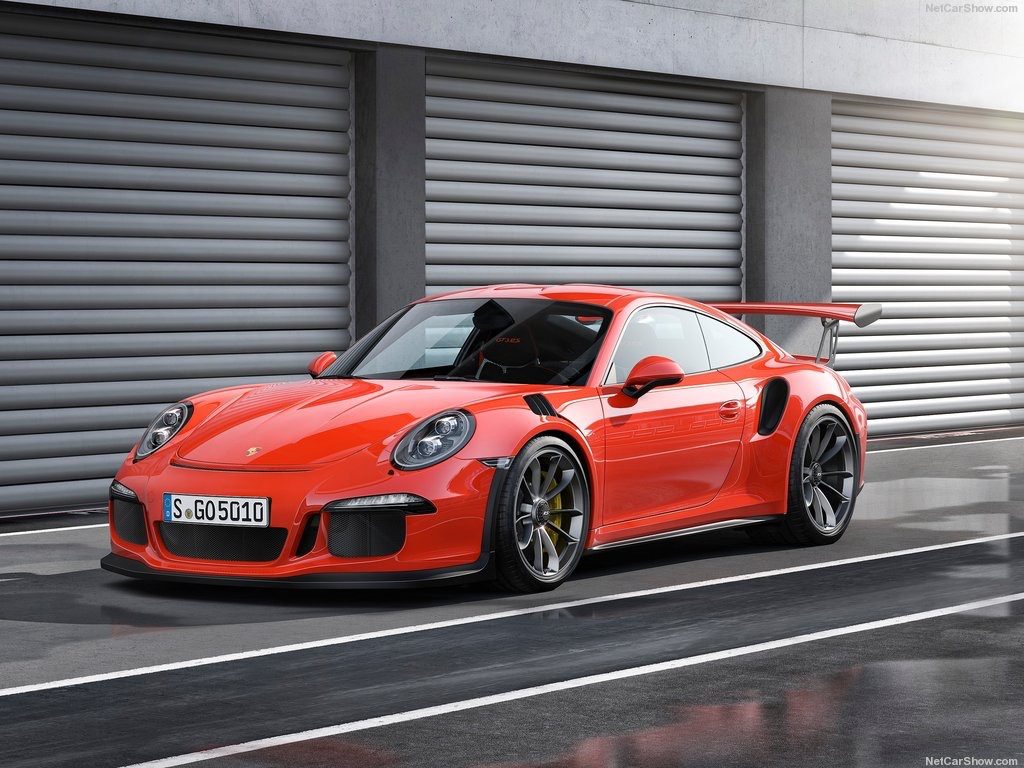 The Porsche 911 GT3 RS is, in our well regarded opinion(well, we regard it), the apex of a tremendous 911 lineup. At least it is now that the 918 Spyder has been mothballed. In order to have such a designation, the 911 GT3 RS has to be chock full of technology, so we thought it would a great deal of fun to delve into the various tech that underpins a car that makes you giggle like a schoolgirl when you get in or out of it.

Under the bonnet the Porsche 911 GT3 RS is powered by a 500 bhp flat-six. The additional horsepower(compared to the base GT3) is achieved by an additional 4mm of stroke. The GT3 RS also features beefier pistons, titanium connecting rods, and the same steel crankshaft found in the Porsche 919 Hybrid LMP1 race car. The steel for the crankshaft is melted and remelted over and over again. Each melting is done in a vacuum to render the purist possible metal. Undoubtedly, the process   contributes quite a bit to the GT3 RS’s L151,000 price tag.

If you have 500 bhp at your disposal, you are bound to try to use every bit of it at some time. That means you are going to need some very stout brakes to get it back down to normal traffic speeds; or, God forbid, stop it. That is why the RS should be equipped with Porsche Ceramic Composite Brake (PCCB). The upgraded brakes will set you back L6,937, but you will be glad you spent the extra money.

The PCCB rotors are built from silicon carbide that has been reinforced with carbon-fiber chips. They are 35.5 mm larger than the base cast-iron units in front and 33 mm larger in the rear. The rotors are kept in place by fixed aluminium calipers that can only be described as massive. The pads are aggressive Pagid units. To keep braking power consistent in a sports car, they have to be cooled. The GT3 RS does this through large intake ducts(pictured below) channeling air directly to the rear brakes. On a side note, Porsche developed a special tool to remove the wheels because doing so incorrectly could damage the brake rotor. Since each rotor costs L4,500, its best to use the tool.

What good is a powerful engine if you can not hear it? The RS has an awe-inspiring exhaust note. It sounds off through a lightweight titanium exhaust system. Titanium is used because it shaves 3 kg from the weight of the stainless steel exhaust system used in the base GT3. It also looks pretty nifty…turning purple under heat instead of rusting. 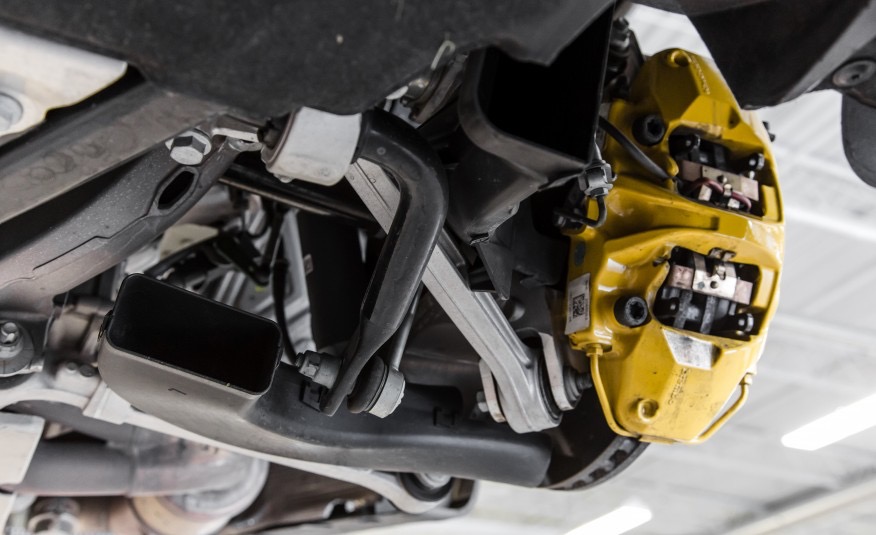 The RS has an impressive amount of height adjustability for its rear dampers. If you aren’t careful, you   can lower the rear to the point that the tyres are rubbing the bodywork. In addition to the rear dampers, owner’s can adjust the anti-roll bars and the front strut towers. The strut towers can adjust to 1.5 degrees of negative camber, ff you should so choose. The GT3 RS offers up 1.08g on the skidpad. Unfortunately, that lags behind several of its competitors.

Steer From The Rear 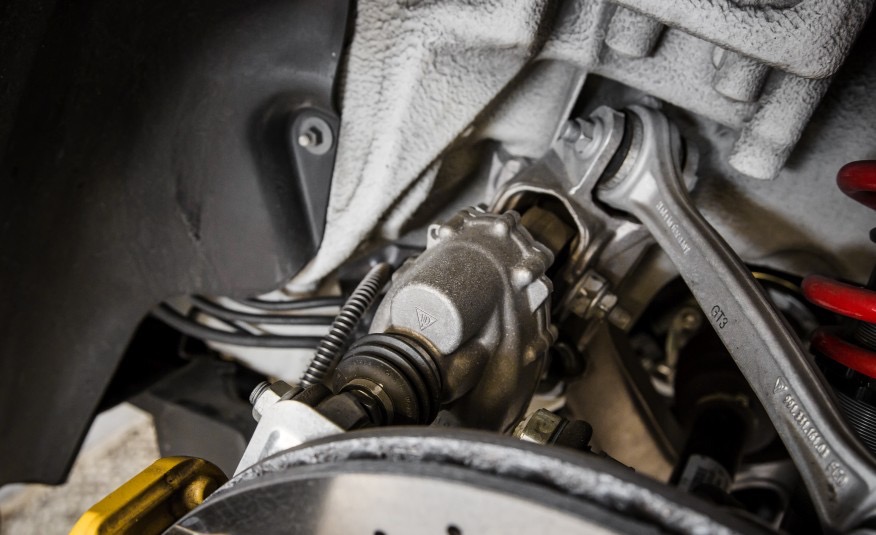 There are three words that best describe Porsche’s center-lock wheels: impractical, fussy, and incredibly expensive. The center-locks require an astronomical 600 N-m of torque to tighten. Compared to the normal 135, that is stratospheric. Technicians have to be armed with a torque wrench that is nearly 2 m long in order to get the job done. 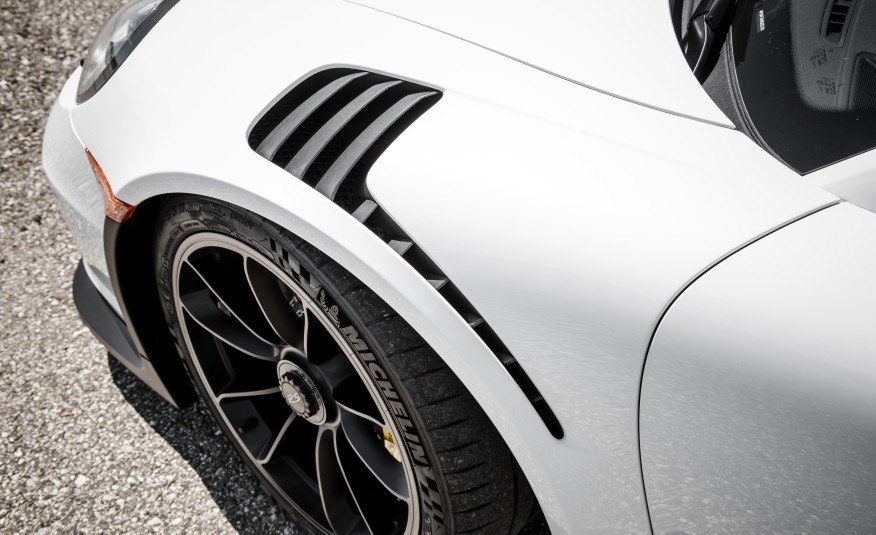 Driving enthusiasts would drool over the possibility of a manual gearbox, but Porsche deemed that the GT3 RS only have the PDK dual-clutch automatic gearbox. While the lack of a manual option is disappointing, the PDK is more than up to the task shifting quick as lightning in all modes without input from the paddle shifters. In the RS, the PDK does not have a ”creep”; meaning that the gearbox will not engage while idling, the driver must hit the throttle. The gearbox will go to neutral if the driver pulls on both paddle shifters at the same time. Why is that important? Well, if you do that, then hit the pedal hard and release both paddles, the rear wheels will spin nicely. There is just something about the smell of fresh rubber on the pavement.

Seemingly an innovation derived from racing, the RS’s Pit Speed is basically a secondary cruise control that can be set at any speed under 88 km/h. What it really does is annoy most users because it requires switching between two cruise controls. Hopefully, it will not make an appearance in next year’s model.

One of the major upgrades of the RS over the base GT3 is its increased downforce. This is achieved through various aerodynamic upgrades. Up front, the splitter and fender vents are the main contributors. The cavernous vents, shown above,  force high-pressure air to exit in a way that increases the frontal downforce to nearly 267 pounds at 300 km/h. Out back, the carbon fibre wing can add up to 494 pounds of downforce depending on which of the three settings that you have it in. Those numbers   give the RS three times as much downforce as the base GT3 and approximately 80 percent of that created by the GT3 Cup car.