Skip to content
TOP  >  Car Review  >  The 2017 Mercedes-AMG GT: An Affordable AMG For The Masses 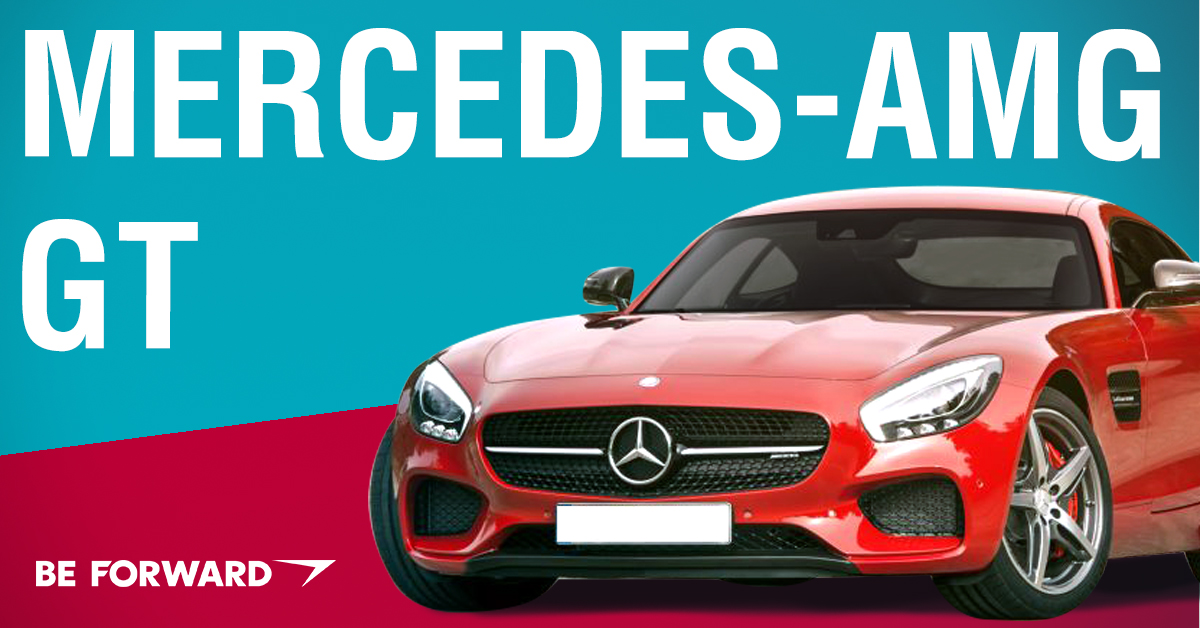 Affordability is a state of mind…well, a state of your wallet at least. Mercedes-AMG is well aware that it is losing market share by not offering a discount or econo sports car model; hence, the premium automaker is adding a new model to its lineup: the AMG GT. In the interest of full disclosure, this is not an econo offering in the true sense. It is simply the Mercedes-AMG version 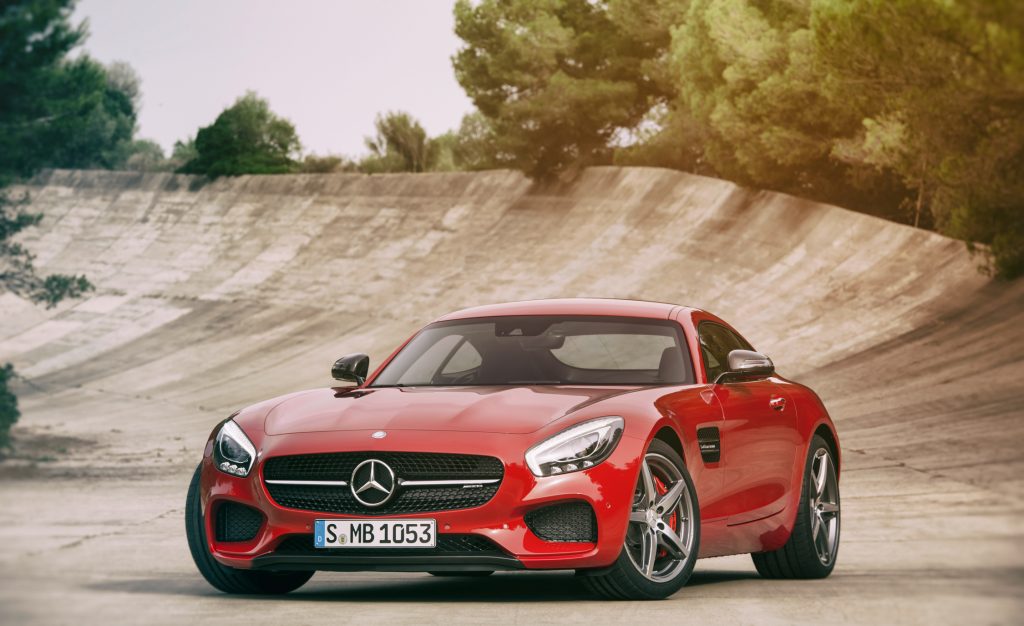 What you get is a sleek and sexy V8-powered machine that will turn heads. The powerplant is less beefy than the one found in the GT S or the GT R, but you still get plenty of go for your dough. While the V8 is the same as that found in the GT S, the base GT loses 47 bhp and a few dozen N-m of torque. Despite that, you still have 450 bhp that allows you to jump from 0-100 km/h in just 3.9 seconds. Keep pushing the pedal and you will find the GT’s top speed of 304 km/h. That is only 0.2 seconds and 6 km/h slower than the GT S.

What You Don’t Get

Other than the negligible performance sacrifices, you mainly give up interior appointments. You will have to suffer with base leather; no Nappa here. You also have to live without AMG’s adaptive exhaust, a Burmester audio system, adaptive suspension, and red brake calipers. You still get a backup camera, proximity key, and a limited-slip diff. The base GT starts at L86,330, so you also lose about L15,380 from the sticker price of a GT S. 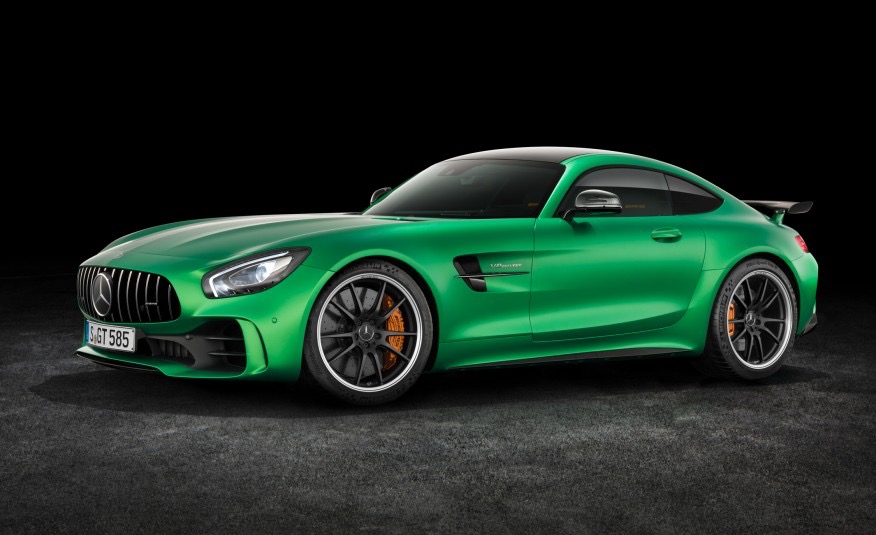 Where the base GT is an offering for the masses, the Mercedes-AMG GT R is a 577 bhp track ready beast waiting to be unleashed onto an unsuspecting world. The car is so track-focued that AMG gave it a paint color to remind aficionados of the Nürburgring’s north loop. Jackie Stewart aptly named the loop ”Green Hell”; and so, the GT R is available in Green Hell Magno only.

Combine the hellish green paint with LED headlamps and huge outboard vents and you can almost envision the GT R laying in wait for passing prey. The GT R debuts a fresh grille. The grille, dubbed the AMG Panamericana overtly resembles the unit worn by the Mercedes-AMG GT3. The intent is to remind buyers of the 300SL that took honors at the 1952 Carrera Panamericana Mexican road race. While the grille is debuting here, it is planned or several other models in the near future. What else…oh, yeah! The middle intake is fitted with automatic louvers to direct airflow for peak efficiency. At speed, they close to lower drag, but can open when needed to blast air to the intercooler heat exchangers. Also, there is a carbon fiber splitter to increase downforce. The carbon fiber front fenders and the aluminium rear fenders are wider than the base GT by a handful of millimeters. Weight is further reduced by a carbon fiber roof, rear diffuser, and adjustable wing.

Still on the exterior of the car, but hidden underneath is a movable carbon fiber component that automatically moves downward at 80 km/h. This creates a venturi effect(the blow of the passing air is turned into a suction effect) to hold the car to the road more effectively. There is also a a radiator air outlet that feeds a double rear diffuser. When open, Mercedes claims this improves the stability of the rear axle and cools the brake rotors. The combined effects is that the GT R’s downforce is improved by 155 kg(342 pounds) at its top speed of 318 km/h. 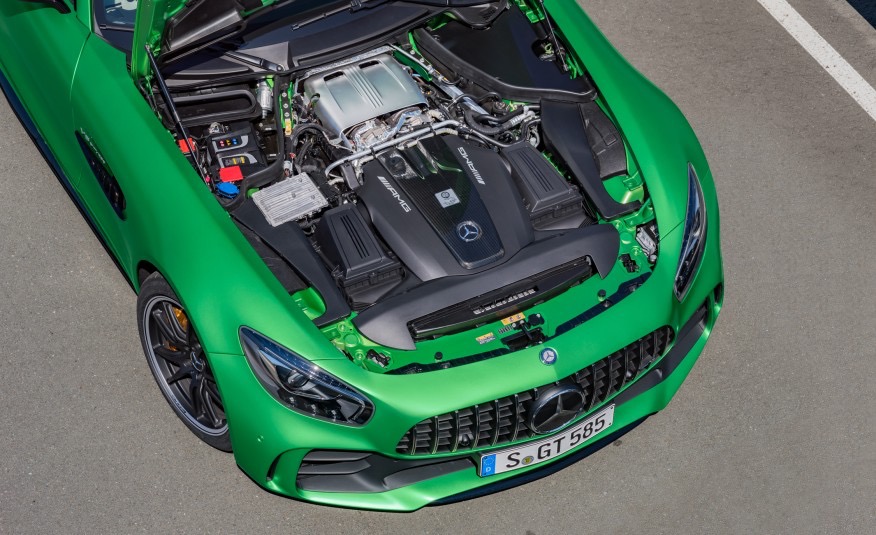 The GT-R is powered by the same V8 as the GT and GT S, but the engineers at Affalterbach were kind enough to add some horsepower. 74 bhp to be exact. What are ponies without accompanying torque? Nothing, so another 50 N-m were added. That means the V8 under the GT R’s hood offers 577 bhp and 700 N-m of torque, more than enough to get you around the Green Hell in a decent time.

The power boost is courtesy of new turbochargers, a revised intake, forged-aluminum pistons, a higher compression ratio, and upgraded engine-control software. Power is also helped by a lighter flywheel for better engine response and an improved cooling system to assist retain full engine output during high-heat conditions and while racing. The gearbox fitted to the GT S could not withstand the additional power and torque of the engine, so a beefier seven-speed dual-clutch automatic was installed.

The GT R posts the best track times of any Mercedes-AMG offering other than the GT3. It has a claimed 0-100 km/h time of just 3.5 seconds and a top speed of 318 km/h. Given that Mercedes-AMG is one of the few manufacturers that underestimates is performance numbers, this car should make you pack spare underpinnings for yourself.

The only thing that Mercedes-AMG is being cagey about is the sticker shock the new GT R will cause. Given the price tags of the GT and GT S, the GT R should come out somewhere in the L154,000 neighborhood.