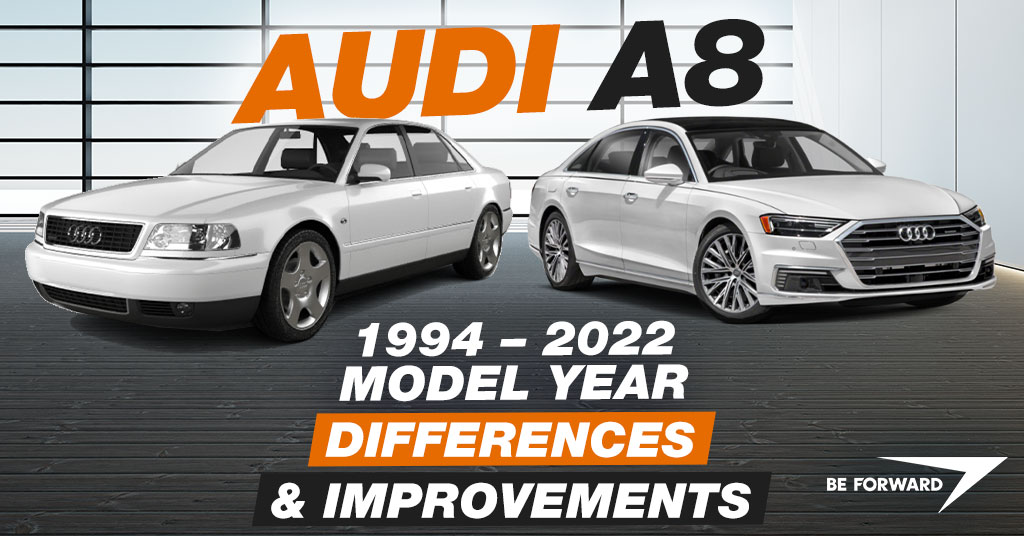 The Audi A8 is a full-size luxury sedan built and marketed by the German automotive manufacturer Audi. The A8 was unveiled in 1994 as the successor to the Audi V8 and is now in its fourth generation.

The A8 is the first mass-produced vehicle with an aluminum body and chassis. It was available in regular and long-wheelbase variants.

Let’s take a look at the four generations of the A8 and how they evolved. Please read on.

The first-generation Audi A8 was unveiled in 1994 as a full-size luxurious sedan. The A8 came to replace the Audi V8 and was built on Volkswagen’s Group D2 platform in an all-aluminum body and chassis, referred to as the Audi Space Frame.

The A8 was available as either a regular A8 saloon or a long-wheelbase ‘A8L’. This LWB model is about a meter longer than the regular model.

The exterior of the A8 features discrete looks, its front consists of a long hood, a black grille with a chrome outline and a chrome Audi logo at the center, while on the sides it’s flanked by rectangular headlights. The A8 came fitted with 16-inch alloy wheels.

The cabin of the A8 is finished with premium quality materials, and unlike its not so catchy exterior, its interior is superbly built, wonderfully comfortable and supportive, easy to use, and luxurious. Standard interior features include leather upholstery, the wood trim, four-spoke leather-covered steering wheel with the Audi logo engraved, and stereo radio cassette player.

Available storage options are the glovebox, door pockets, front seat jacket pockets, and tray that can handle coins, earrings, or keys on the center console.

The second-generation A8 was introduced in 2002 as a 2003 model. It was built on the Volkswagen Groups D3 platform which made the car longer and the cabin spacious.

This A8 featured a more rounded shape, its facial features included clear-cut Bi-Xenon HID headlights, a single frame grille with an upper grille with a chrome Audi logo complemented with a lower one under the bumper just beneath the license plate area. The sides are contoured almost similar to Jaguar cars.  At the rear, a sloped rear window ends on a horizontal flat trunk lid that is met with high-mounted taillights.

The interior has been restyled, with the cabin looking classy and the interior well-finished. Its comfortable and supportive electric seats and the classic four-spoke steering together offer a good driving position. The dashboard is simply laid out with a clear and easy-to-read light metallic-themed instrument cluster, while the center console is fitted with Audi’s MMI (Multi-Media Interface) one-button stereo and sat nav interface with fairly intuitive controls.

Under the hood, the second generation A8 is fitted with a 3.2-liter FSi as the base engine later Audi introduced a 4.2-liter V8 TDi diesel engine with 326 hp and 479 lb-ft of torque which Audi proclaimed to be the world’s most powerful production diesel engine. In 2007 an environmentally friendly 2.8-liter FSI engine was introduced with a small carbon footprint. There were also several other engines offered to make a total of 10 optional engines. These engines were paired with a 6-speed automatic transmission.

The third generation A8 was released in 2009 as a 2010 model. This model was built on the VW Group MLB platform but retained Audi’s Space Frame aluminum construction that made the car light but also made the car efficient.

The exterior changes included a redesigned single-frame grille, redesigned Xenon headlights with LED DRLs, and foglights were part of the main lamp. The foglight positions on the bumper now accommodate radars and sensors.

The fourth-generation A8 was released in 2017 as a 2018 model. The car was still made of aluminum by 80% utilizing Audi’s Space Frame (ASF) design that makes it the lightest sedan in its category.

The exterior looks of the 2018 A8 have not changed much compared to the previous model except for a few features that help you notice that this is a new version. The features include a larger redesigned hexagonal chrome grille, new HD Matrix LED headlights with dynamic indicators, drawn-out shoulders, a panoramic glass sunroof, heated and power-folding mirrors with dynamic indicators, auto-dimming mirrors, and 19-inch wheels.

The 2018 A8 came fitted with either a turbocharged 3.0-liter V6 petrol engine with 335 hp and 369 lb-ft of torque, a  twin-turbo 4.0-liter V8 petrol with 453 hp and 487 lb-ft, or a hybrid version that uses a 3.0-liter engine combined with a motor with a combined output of 443 hp and 516 lb-ft of torque. These hinges were paired with an eight-speed automatic transmission and all-wheel drive.

2022 Audi introduced an upgraded A8. This flagship Audi sedan has received some styling makeover which includes a new grille, redesigned front and rear bumpers, revised headlights and taillights lighting, and new wheel designs. This 2022 model also offers an S-line-inspired exterior appearance package, which gives the A8 a look that resembles the performance-oriented S8 model.

The 2022 A8 like previous models has an impressive cabin, and its LWB guarantees rear-seat occupants with that rear limo-like room. Five seats are standard, with four as an option that cancels the rear center seat and creates a pair of heated and ventilated power-adjustable rear seats with massaging function as well as a heated foot-massage function and a pair of tablets. Extra features include extended leather and a small forest’s wood inlays.

The 2022 A8 comes with Audi’s Virtual Cockpit with a 12.3-inch instrument cluster as standard and a 10.1-inch upper and 8.6-inch lower touchscreens with Audi’s MMI Touch Response system. Android Auto, Apple CarPlay, and two upfront USB ports are now standard with Amazon Alexa compatibility. For an additional subscription fee, you get Wi-Fi via Audi Connect Plus.

The 2022 A8 comes fitted with a turbocharged V6 with 335 hp which is boosted by a 48-volt hybrid system. This engine is paired to an eight-speed automatic transmission with all-wheel drive as standard.

From this brief review on the Audi A8 models, we come to the conclusion that the A8 is a luxurious car that in most parts has been overlooked, but in reality, buyers are missing a great hidden gem. The A8 has pioneered technologies, has been ahead of time by offering AWD as standard when others didn’t, has been built on an aluminum frame and body making light and efficient, something no other car in its category has been able to replicate and has always offered leather upholstery as standard.

If you would like to experience the greatness of the Audi A8, it’s not too late you can buy one or more at BE FORWARD with a list of 50+ used models to choose from.