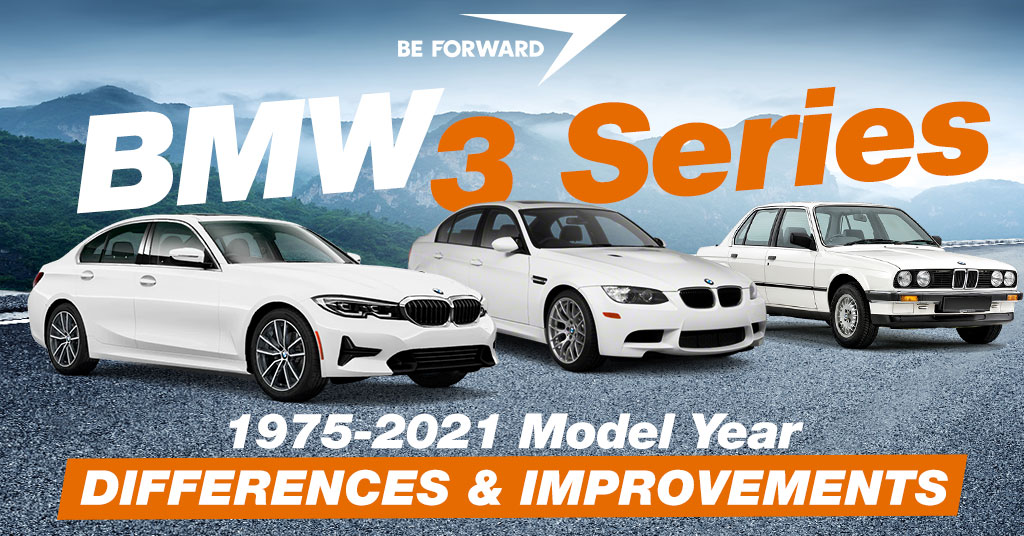 The BMW 3 Series is a midsize executive luxury car manufactured and marketed by the German company BMW.

The original 3 Series was only available as a 2-door Sedan; but later in 1977 Baur GmbH, a Stuttgart-based company was contracted to transform the 3-Series into a convertible, giving birth to the legendary Baur Topcabriolet. From 1982 when the second-generation 3 Series eventually led to the availability of many more body styles such as 2-door coupé, 2-door convertible, 3-door hatchback, 4-door saloon, 5-door estate, and 5-door liftback (“Gran Turismo”). From 2013, the coupé and convertible models were no longer part of the 3 Series lineup and were instead marketed as the 4 Series.

The 3 Series is currently on its seventh generation from 2018.

In this article we are going to take a look at the evolution of the 3-Series, please read on.

In May 1975 at Munich’s Olympic Stadium, the BMW 3 Series was unveiled to the world. The car was designed by Paul Bracq who was the BMW director of design from 1970 to 1974.

The 1975 BMW 3 Series E21 was a 2-door sedan with a raised tail section and a crease line along the body. A view from behind the E21 the section between the taillight was not pleasing which resulted in BMW designers adding a black plastic trim to cover that section. At the front, the E21 featured a short overhang, a double kidney grille, twin headlamps, and the Hofmeister kink on the C-pillar.

The interior of the 3 Series E21 features a dashboard angled towards the driver which became a BMW standard feature.

In 1977, a Stuttgart-based company known as Baur GmbH was contracted to transform 4,595 BMW 3 Series into convertibles, which resulted in the Baur Topcabriolet.

The E30 3 Series was initially launched as a two-door sedan, with a four-door sedan launched later in 1983, and a five-door Wagon in 1987. The Baur convertible conversions continued being converted even after the introduction of a factory-based convertible in 1985.

On the exterior, starting from the front, you are met with striking twin headlights and the trademark kidney grille, while at the rear, the Hofmeister kink is still present which leads us to a rear black spoiler. With this release, twin headlights became a standard feat in every BMW 3 Series from then on.

The interior of the E30 is typical of the 80’s era vehicles with several analog dials, the driving position is so great and the firm seats are so comfortable, while at the rear there is not enough legroom and headroom due to the limited rear space but the boot is great.

The BMW E36 3 Series is a midsize executive car produced and marketed by the German automaker BMW. The E36 is the third generation 3 Series that was in production from 1990 to 2000. The E36 was initially available as a 4-door Sedan, but later several other body styles were released, which include the Coupé, Compact (hatchback), Convertible, Touring (Wagon), and M3 (as a Sedan, Coupé, or Convertible).

The design of the E36 made the car longer, wider, and taller than the E30. The front fascia is covered by twin headlights beneath a shared glass cover and a wider “BMW kidney” grille. The long hood created a much bigger space to accommodate the engines and a crumple zone for much better impact protection.

Inside, the E36 there are five comfortable and supportive seats, and the rear legroom was better. Optional interior features include power windows, air-conditioning/climate control, onboard computer, sunroof, front airbags, a premium audio system, and power windows.

Under the hood, the E36 was fitted with a wide range of petrol and diesel engines starting with a 1.6-liter (M40) petrol previously used on the E30 and up to a 3.2-liter (S30) petrol for the M3. For diesel, available engines were the turbocharged 1.8-liter (M41D17) and the turbocharged 2.5-liter (M51D25). These engines were mated with 4- or 5-speed automatic and 5- or 6-speed manual transmissions.

The BMW 3 Series E46 is a compact executive car produced and marketed by the German company BMW. The E46 is the fourth generation of the 3 Series lineup that was in production from 1997 to 2003. The E46 is available in 5 body styles which are the Sedan, Convertible, Coupé, Touring (Wagon), and Compact (hatchback). The M3 performance model was available in Convertible and Coupe bodies only.

The front facial of the E46 twin headlights is covered by a clear headlight cover and the turn signals are downward-shaped on the corners. The “BMW-kidney” grille is now embedded on the hood. On the lower side of the bumper, between the fog lights, the E46 has bigger grilles for cooling the engine, and flared wheel-arches are now standard.

The E46 features a curved roofline for that extra headroom, and all body styles feature unique design elements for an individual design language.

The interior of the E46 is well designed, its seats are supportive and comfortable, with enough legroom and headroom. Compared to previous 3 Series models, the E46’s dashboard is not that much tilted towards the driver which enables even the front passenger to have access to the audio controls.

Like the previous 3 Series generations, the E46 also came with a wide range of engines that range from 1.6-liter to 3.2-liter petrol with 105 hp to 360 hp and turbocharged or naturally aspirated 2.0-liter to 3.0-liter diesel with 114 hp to 201 hp, in inline-4 or 6 configurations. The car was available with a five or six-speed manual transmission and four or five-speed automatic. The E46 reintroduced the return of the all-wheel-drive system on the 3 Series, with petrol models badged Xi and diesel Xd.

The BMW 3 Series E90 (also referred to as E9x) is a compact executive car produced and marketed by the German company BMW. The E90 is the fifth generation of the 3 Series lineup that was in production from 2004 to 2010. The E90 is available in 4 body options which are the four-door Sedan (E90), five-door Touring/Wagon (E91), two-door Coupé (E92), and two-door Convertible (E93). The M3 performance model was available in Sedan, Convertible, and Coupe bodies only.

The front facial of the E90 like the E46 features twin headlights covered by a clear headlight cover. The “BMW-kidney” grille is no longer embedded on the hood.

The interior of the E90 3 Series is impressive, well built, and comfortable. The seats are accommodating and supportive offering excellent comfort to all occupants. The front and rear seats offer decent legroom, but in terms of headroom, the rear seats have limited headroom for taller passengers (excluding the Wagon). The E90 has an excellent driving position with a rake and reach adjustable steering wheel, and clear instruments.

The E90 is offered in a wide choice of magnificent petrol and diesel engines. At launch, there were three optional petrol engines – the 2.0-liter (320i) with 152 hp, the 2.5-liter (325i) with 221 hp and the 3.0-liter (330i) with 262 hp, and one diesel – the 2.0-liter (320d) 165 hp. There are other optional turbocharged and naturally aspirated engines available as well. These engines transfer power to the wheels via either a six-speed manual, six-speed automatic, or seven-speed dual-clutch transmission. Some models are equipped with BMW’s xDrive AWD drivetrain.

The BMW 3 Series F30 is a compact executive car produced and marketed by the German company BMW. The F30 is the sixth generation of the 3 Series produced from 2011 to 2017. The F30 is available in 3 body options which are the four-door Sedan (F30), the five-door Wagon/Touring (F31), and the four-door Fastback (F34). The Coupe and Convertible are no longer part of the 3 Series, they are now sold as a standalone model known as the 4Series.

The F30 is available in three trims: the Modern line, Sports line, and Luxury line.

The F30 is elegantly designed with its face featuring flat headlights that extend to the kidney grille. The F30 has dimensionally grown with its wide track body that accentuates its sporty silhouette.

The interior styling of the F30 is simple, elegant, and functional. The seats are comfortable and supportive, covered with a mixture of cloth and leather upholstery depending on trim. The F30 grew in size providing much better legroom, shoulder room, and headroom compared to the E90.

The driving position is great with a considerable range of steering and seat adjustments to the comfort of the driver. The F30 comes with a 6.5-inch color central display with its functions controlled by BMW’s iDrive control system. The iDrive was updated in 2017, it featured a new interface with several BMW tools and online connectivity functions that enabled online streaming from apps like Spotify and Deezer.

With the F30, the BMW 3 Series went electric! For the first time, the engines offered included hybrid options (the ActiveHybrid 3, followed by the 330e iPerformance). The F30 was the first 3 Series to exclusively be fitted with turbocharged engines that ranged from the 1.5-liter I3 to the 3.0-liter I6 for petrol and 2.0-liter I4 to 3.0-liter I6 for diesel. These engines were mated with a six-speed manual or eight-speed automatic transmission.

The BMW 3 Series G20 is a compact executive car produced and marketed by the German company BMW. The G20 is the seventh generation of the 3 Series produced from 2018 to the present. The G20 is available in 2 body options which are the four-door Sedan (G20) and the five-door Wagon/Touring (G21). The Gran Turismo Fastback has been discontinued.

The G20 features a new BMW design language. The notable feature is the wider kidney grille visually integrated into the design. But still, this seventh generation 3 Series upholds the design traditions of the earlier BMW 3 Series models such as the twin headlamps, crease line, and short overhangs.

Inside the cabin, BMW has opted for minimalism, with the latest technology. The G20 comes with BMW’s iDrive 7.0 system that leads in terms of features and functionality, with the option of over-the-air updates and applications updates.

At the top of the dash, the G20 is fitted with a 10.25-inch infotainment system with AM/FM radio and a DAB+ tuner. Other standard features include a 10-speaker sound system, Apple CarPlay, and Android Auto. The instrument cluster consists of a 12.3-inch screen that displays navigation data and trip computer details, while further on the windscreen there is a head-up display that also displays navigation data, speed, and other car information.

The 3 Series is BMW’s biggest selling model with almost 15 million cars sold in more than forty years since it was introduced. From the E20 to the G20, every model is unique in its own way, with every upgrade coming with new technological features. One thing that these seven generations have in common is being comfortable, reliable, and durable.

If you are in the market for used BMW 3 Series, please visit BE FORWARD and check out our list of 1000+ used 3 Series models on sale.