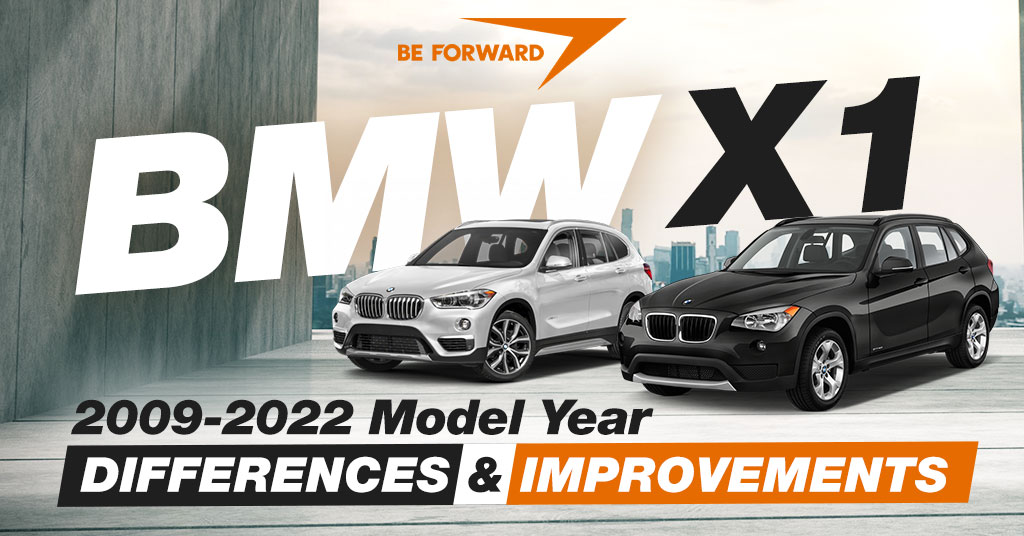 The BMW X1 is a subcompact luxury crossover manufactured by the German automotive company BMW. The X1 was unveiled in 2009, as the smallest SAV (Sports Activity Vehicle) in the BMW line-up that was aimed at a wider range of customers with respect to its size, lower price tag, and increased efficiency. In many markets, the X1 is sold as an entry-level bimmer and this helped BMW reach out to new customers.

Let us take a look at the evolution of this car to learn about its journey so far. Please read on

The first-generation (E84) BMW X1 was unveiled in 2008 for the 2009 model year. It was based on a similar platform as the E90. The X1 (E84) was available in either standard rear-wheel drive (sDrive), or all-wheel drive (xDrive) variants.

The exterior of the X1 is beautiful, with a shape similar to its larger BMW SUV siblings. The face features BMW’s kidney grille flanked by round Xenon headlights with white LED corona rings DRLs. The body is full of bulges and flowing curves that are cohesively combined to make the car more appealing. At the rear, you find a two-piece tail light, a spoiler with a stoplight at the top of the tailgate, and a prominent underguard that enhances the car’s sporty and off-road appearance.

The interior is spacious and nicely finished, with quality materials with plenty of technology included. The seats are comfortable and supportive, and both rear and front passengers are provided with enough headroom and legroom, although tall passengers may wish for more legroom. The luggage compartment is 420 liters with rear seats in place. The rear seats can be split folded in a 40:20:40 to extend storage space to a maximum of 1350 liters.

The X1 was available in optional petrol (denoted ‘i’) and diesel (denoted ‘d’) engines. The engines include a turbocharged 2.0-liter 4-cylinder petrol with 240 hp and 258 lb-ft of torque fitted in the rear-wheel-drive sDrive28i and all-wheel-drive xDrive28i, while the turbocharged 3.0-liter V6 petrol with 300 hp and 300 lb-ft came fitted in xDrive35i. Diesel versions came fitted with either a turbocharged (sDrive16d, sDrive18d, sDrive20d, sDrive20d Efficient Dynamics) or twin-turbo (xDrive23d or xDrive25d) 2.0-liter 4-cylinder diesel engine with 180 hp and 280 lb-ft and 215 hp and 332 lb-ft respectively. These engines were paired with either a 6-speed automatic, 6-speed manual, or 8-speed automatic transmission.

The second-generation (F48) of the BMW X1 was introduced in 2015 for the 2016 model year. The X1 F48 was built on a new platform and was now available in front-wheel-drive (sDrive) as standard and all-wheel-drive (xDrive) as an option. Initially, the X1 F48 was available in SE, Sport, and X Line trims, while the M Sport trim was added late.

The exterior styling aligned this 2016 X1 with the rest of BMW‘s Xs lineup. A new grille, redesigned headlights, and a lower trapezoidal air intake make up the face of this X1. The greenhouse is two inches taller now, an inch wider, and seemingly a bit longer too. At the rear, a shark fin antenna is placed on the rear part of the roof, an enlarged spoiler without the stoplight is placed at the top of the tailgate, and the two-piece tail lights are all LED now.

The interior of the X1 F48 is so user-friendly, with the designers prioritizing clarity over design flourishes. The build quality is outstanding, the cabin is both roomy and versatile, with a clearly laid out dashboard fitted with a 6.5-inch (8.8-inch optional) iDrive system. Head, shoulder, and legroom have improved significantly compared to the previous model, and in the back seat three adults can fit in smoothly. The 505-liter boot is good enough, and if you need more space, you can extend it by folding the rear seat to get a maximum of 1550 liters.

In 2019 the X1 F48 received a mid-life update with cosmetic styling updates, new interior tech, and tweaks under the hood.

Let’s start by looking at the exterior. The most evident changes are at the front, where there are new headlight graphics that replace the previous round ones, new large kidney grilles that almost touch each other, and a new bumper. At the rear, the taillights ditch the previous orange indicator units for clear ones. These looks differ depending on the trim level.

Inside, the infotainment system was upgraded with the previous optional 8.8-inch screen being standard and an optional 10.25-inch touchscreen introduced as part of the Tech Pack. This unit can take commands via either voice commands, the touchscreen, or the iDrive click wheel.

In 2019, the X1 xDrive25e PHEV was released, it came fitted with a combination of a turbocharged 1.5-liter 3-cylinder petrol engine and an electric motor with 220 hp and 284 lb-ft of torque. This engine is paired with a 6-speed Steptronic automatic transmission.

The 2022 X1 has no significant changes. Apart from the mid-cycle refresh it received in 2020, with cosmetic changes to its front and rear, and the introduction of a larger infotainment screen.

From this review, we learn that the BMW X1 is a great subcompact luxury SUV. It comes with most of the things that one expects from a small crossover. A spacious cabin, a large cargo area, a user-friendly infotainment system, a choice of energetic and efficient engines, and sporty handling.

We at BE FORWARD have a stock of 300+ used BMW X1 listed for sale. Please check out our stock to find your next car.