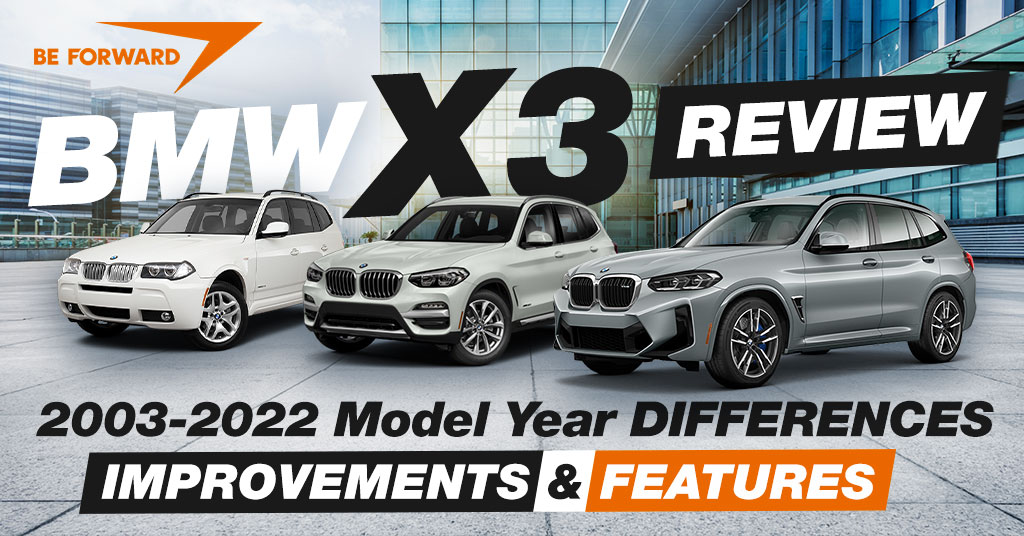 Manufactured by one of the leading German automakers BMW, the BMW X3 is among the oldest compact luxury crossover SUV introduced in 2003 and based on the BMW 5 Series platform. Coming in 3 generations from 2003 to the present, BMW keeps showing that it has so much to provide with the newest and latest release of the BMW X3.

On the market, it was considered the 1st mid-size, premium SUV. Since 2008, has X3 started competing with the numerous other SUVs and Mercedes-Benz GLK-Class in this segment. Currently, it slots above the smaller X1 and the X2 and below the larger X5 and X6.

The X3 was considered to combine the agility of a compact model with the driving experience of the company’s X5. The X3 featured a high H-point seating configuration, an upright, marketed as “command seating”. Styling exhibited interacting convex and concave surfacing, characteristic for the company at the time along with a reinterpreted Hofmeister kink.

In 2005 BMW upgraded the model and in 2007 facelifted the model, with revised interior trim, engine, body bumpers, and suspension.

The interior of the BMW X3 2003–2006 models was upgraded with more consistent plastic panels.

On the 2004 models, an ‘Open-Door’ indicator was added and front fenders are one-piece, as opposed to the 2-piece found.

The E83 received a facelift with a revised interior, front bumper, rear bumper, tail lights, grille, and headlights in September 2006.

The US market X3 for the 2007 model year was installed with the N52 I6-cylinder engine that debuted on the 2006 E90 3 Series. Globally, BMW X3 received smaller engines including the 4-cylinder diesel and petrol options. In the Europe market, the range started with 2.0L four-cylinder petrol, four-cylinder turbo diesel and continues with six-cylinder turbo & bi-turbo diesel. The sport diesel with 282 hp was the largest diesel offered.

The Edition Exclusive and Edition lifestyle have been available since September 2008. In March 2009 the M-Sport package was replaced by the Sport Limited Edition.

In 2010 at the 2010 Paris Motor Show the BMW X3 F25 was unveiled for its second generation. The production moved from Magna Steyr in Austria to BMW’s United States plant in Greer, South Carolina. Production of the BMW X3 second generation started on 1 September 2010 and ended in August 2017.

BMW introduced the X3 with the sDrive intelligent rear-wheel drive system as an option in July 2018.

Full M specific M performance parts including a spoiler, carbon fiber vents, and kidney grilles, and the sport steering wheel can be fitted to a Full M model.

The 2022 BMW X3 is a family member of the third generation. The 2022 BMW X3 delivering practicality and luxury, also channels sports sedans from BMW’s past to mixture driving fun into the equation. Its well-tuned steering and balanced chassis make it a surprisingly willing partner on a twisty road, and both of its available turbocharged powertrains—either a 4- or 6-cylinder—provide sufficient power.

The BMW X3‘s cabin is roomy, comfortable, and upscale if conventional in its design. BMW has combined adequately tech into the X3, including a host of driver-assistance features as well as 2 digital dashboard displays.

The BMW X3 receives a refresh to its styling for 2022, which includes new headlamps and taillamps, a revised grille, new wheel designs, tweaked exhaust tips, and updated front and rear bumpers. The standard X3 is now available with an M Sport exterior-looking package that dresses it up to look similar to the M40i racier model.

The M40i gains a 48-volt hybrid system for 2022 and has the same 382 horsepower as the 2021 model. Inside, some secondary controls have been repositioned and the center console has been reworked. A matching digital gauge display and a 10.3-inch infotainment display are still standard, and now offer 12.3-inch upgrades for both.

The X3‘s interior is stylish and well equipped before you check a single option box; 10-way power-adjustable front seats, which include adjustable side bolsters, make it easy to find a comfortable position. The rest of the X3‘s cabin is handsome and put together competently, with tight panel gaps and well-chosen materials.

The 2022 X3 is powered by a turbocharged 2.0L 4-cylinder under its hood with the 248-hp, the all-wheel-drive xDrive30i, and rear-wheel-drive sDrive30i offer plenty of power to comfortably negotiate almost any road situation.

According to the EPA ratings the higher-powered M40i has an average of 12.3 Km/L and came in surprisingly close to the 4-cylinder xDrive30i which offered 133.1Km/L.

Overall, the BMW X3 is well rounded but the latest 2022 model has a very attractive design and it’s more stylish, but it’s the gutsy and agile handling turbo engines that make it one of BMWs favorites for 2022.

BMW is one among the vehicles that come with advanced safety features regardless of the year of manufacturing. BMW puts safety as its first priority and most of its lineup meets customers’ demands.To own BMW X3 you need to have financial muscles for some models but other models are reasonable. To buy one of your choices just visit BE FORWARD.