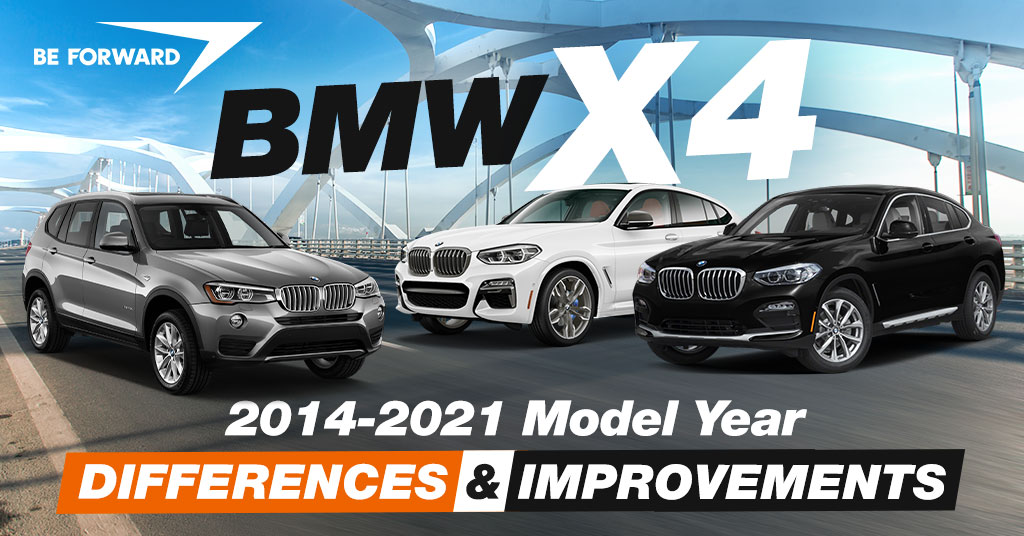 The BMW X4 is a compact luxury cross activity vehicle (SAC) produced by the German automobile company  BMW. The X4 was unveiled in 2014 and is based on its sibling the X3 and inspired by its much larger sibling the X6. The X4 like the X6 is marketed as a sports activity coupe (SAC) with styling features and a roofline like a traditional two-door coupe.

There are two (F16 and G02) generations of the X4, let’s briefly take a look at its history. Please read on.

The first generation (F26) BMW X4 was unveiled in 2014. It was available in xLine or M Sport trims.

The exterior of the X4 is distinguished by its coupe-like low arched roof and strong and dynamic “signature swage line” character lines split in two along the sides, for a more dynamic look. The front end of the X4 looks very familiar as it features BMW’s signature SUV styling cues, such as a set of wide and deep air vents, a set of twin round headlight units that extend to the grille, a set of LED fog lamps, a skid plate, and without forgetting, the signature kidney grilles.

The M Performance model had optional parts offered as part of the facelift and these parts are compatible with all models. The parts include a sports steering wheel, Aluminium pedals, carbon fiber mirrors, black kidney grilles, M rims, and a carbon fiber spoiler.

The interior of the X4 is nice, neat, and comfortable. The dash is intimately designed, it features a wide center console that houses the touchscreen infotainment display and radio and climate controls within close proximity. The F16 X4 is a five-seat car that can comfortably accommodate four passengers. The seats are comfortable and supportive, with the front power-adjustable seats offering plenty of space. The rear seats have limited leg- and headroom with enough space for two adults, three will be a crowd.

The lack of space is counteracted in style. The elegant and well-made interior is dressed with a selection of premium materials. Standard upholstery is BMW‘s SensaTec synthetic leather while genuine leather is an option. Other features are sports seats, a heated steering wheel, and heated front and rear seats.

The X4 came fitted with the iDrive infotainment system with several standard features that include Bluetooth connectivity, a USB port, and satellite radio. Some trims come fitted with a Harman Kardon audio system.

Standard safety features on the F16 X4 include front-seat side airbags, full-length side curtain airbags, antilock disc brakes (ABS), and traction and stability control. Another standard feature is the BMW Assist eCall with automatic collision notification and an emergency assistance button. Optional safety features include a top-view camera, a rearview camera, front and rear parking sensors, and a lane departure/frontal collision warning system.

Under the hood, the X4 came fitted with several optional turbocharged and twin-turbocharged engines with xDrive all-wheel drive as standard. The engines are; the 2.0-liter 4-cylinder petrol engine found on the xDrive20i and xDrive28i with 178 hp and 240 hp respectively, the 3.0-liter (xDrive35i) inline-6 petrol engine with 300hp, the 2.0-liter (xDrive20d) 4-cylinder diesel engine with 190 hp, the 3.0-liter inline-6 diesel engine found on the xDrive30d and the xDrive35d with 258 hp and 310 hp respectively. The xDrive35i was dropped and replaced by the M40i inline-6 petrol engine with 355 hp. These engines are mated with an 8-speed automatic transmission as standard and a 6-speed manual as an option.

The exterior of this second X4 iteration has been slightly revised with its dimensions stretched. The G02 X4 is about 3.2-inches longer, 1.5-inch wider, 2.0-inches taller, and its wheelbase grew by 2.0-inches compared to the F16 X4. Exterior changes included a more prominent kidney grille at the front, while the rear end saw most of the changes with features such as new taillights.

The cabin of the G02 is pretty spacious, thanks to the car’s dimensional growth. You can hardly notice this from the outside. The front seats offer a wide range of adjustments that allow a comfortable driving position. The low-mounted rear seat cushions free up that much need extra headroom.

The dash layout is intuitively designed, with the touchscreen infotainment and climate controls easily accessible, and the iDrive dial controller that controls almost everything also within reach.

Standard features on this X4 include a 10.3-inch touchscreen with free Apple CarPlay for one year. One of the optional features is a wide head-up display.

Under the hood, the X4 came fitted with engines carried over from the X3, paired with standard all-wheel drive.

Like most BMWs, the X4 is luxurious and elegant, but more than that it is Sporty and sleek. Its crossover nature brings with it a versatile cabin capable of accommodating different assortments be it cargo or passengers. The X4 is also an agile car with quick acceleration and responsive handling.

We at BE FORWARD have a stock of 50+ used BMW X4s listed for sale. Please visit our stock to find your next X4.