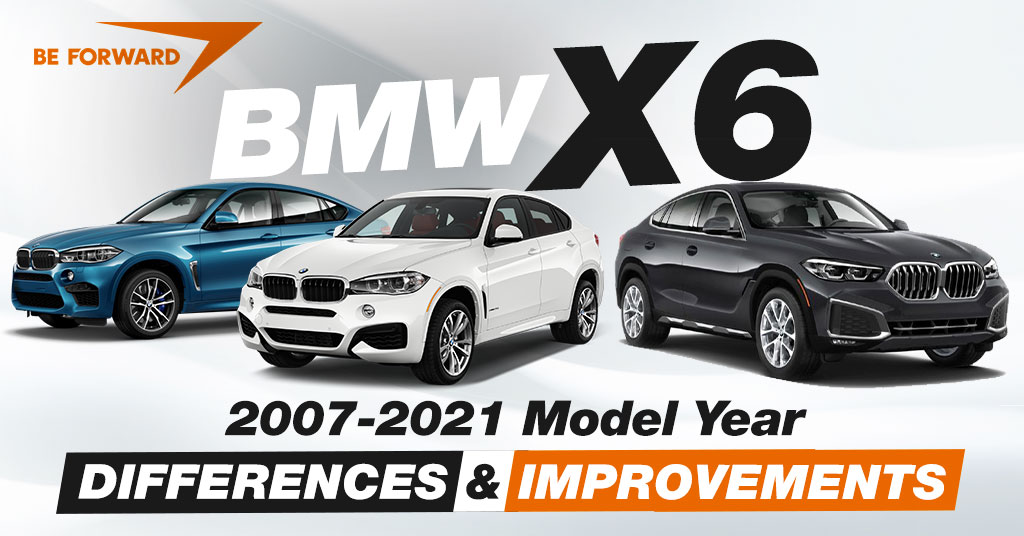 The BMW X6 is a mid-size luxury crossover SUV built by the German automotive company BMW. The X6 was unveiled in 2008 and was marketed as a Sports Activity Coupe (SAC), a car that combines features of a Sports Utility Vehicle (SUV) such as good ground clearance, large wheels, all-wheel-drive, and a spacious interior with the design cues of coupes such as a sloping roof. The X6 was a surprise to the industry as it created a new niche.

Here we are going to take a brief look at the X6 to learn its history briefly. Please follow through.

The first iteration (E71) of the first-generation BMW X6 was unveiled in 2007 for the 2008 model year. It was a stylish four-door four seats mid-size luxury coupe with an elegant roofline and high-performance models. The X6 borrowed much of its mechanicals from its X5 sibling but added some trendy coupe-like looks while trading off-road ability for stylish curb appeal.

The exterior is aggressive and bulgy with a roofline that falls from above the driver’s head rearwards. But still, the boot lid stands at the height of an adult’s chest. Most people found it weird at first glance, but with time, the bug-like looks grow on you.

Inside, the cabin takes its styling from the BMW X5. The dash was fitted with a standard iDrive infotainment system with an LCD display. The front seats were set high, but controversially having just two rear bucket seats that can comfortably accommodate medium-sized adults.

In the second quarter of 2009, BMW unveiled the X6 M high-performance model. It came fitted with a version of the 4.4-liter V8 petrol engine with a twin-scroll twin-turbo system and the Cylinder-bank Comprehensive Manifold with 547 hp and 499 lb-ft of torque. This engine was mated with a 6-speed M Sports automatic transmission with aluminum paddle shifters. The braking system featured 4-piston fixed calipers with a 15.6-inch rotor at the front and single-piston floating calipers with a 15.2-inch rotor at the rear and 20-inch alloy wheels with narrower front and wider rear run-flat tires. The car can accelerate from 0–100 km/h in 4.7 seconds. Other available M performance features include a sports steering wheel, steel pedals, a carbon fiber spoiler, black kidney grilles, and M rims.

For the most part, the car remained the same by looks, but the ActiveHybrid  X6 (E72) had its own distinctive styling features, such as the prominent Powerdome hood lid, “ActiveHybrid” badges, unique 19-inch alloy wheels, and a unique exterior paint known as Bluewater metallic.

The most noticeable change in this model was the introduction of a rear bench seat that could accommodate three passengers, unlike the pre-facelift that had only two rear bucket seats.

The BMW ActiveHybrid X6 is powered by a drive system that features a twin-turbo 4.4-liter  V8 power unit with 402 hp and two electric motors with 90 hp and 84 hp respectively. The combined system output is 479 hp and 575 lb-ft of torque. This system was mated with a 7-speed automatic or 7-speed Two-mode Active ECVT transmission.

The hybrid system can operate in three drive modes: Electric power only, combustion engine only, or a combination of the two. This system was considered as the most powerful production hybrid at the time.

The F16 is an evolution of the E71, its design did not deviate much from the proven formula. The F16 is bold and muscular, slightly larger, wider, and meaner. The front end featured a slightly bigger kidney grille, a set of xenon headlights as standard, and an adaptive LED lights system. The M Sport Package adds black kidney grilles, carbon-fiber trim, splitter, black side skirts rear flaps, and a carbon fiber spoiler.

The G06 X6 is much bolder and meaner with reference to its predecessor. The company introduced some bling-bling and fitted the car with 22-inch rims and the front grille with lights in the snout as an option.

The interior of the base model is well-equipped with standard features such as the BMW Live Cockpit Professional that encompasses two 12.3-inch screens, one touchscreen for the latest iDrive 7.0 infotainment system and the other for the digital instrument cluster.  The system supports Android Auto and Apple CarPlay and has a customizable personal AI assistant that can accept a custom name in place of “Hey, BMW!” each time the driver wants to command. Other features include heated front seats, leather upholstery, ambient lighting, and more.

Legroom has improved a bit, but headroom could be better. The cargo area has improved and is now 580 liter with the option of extending it to 1530 liters by split-folding the 40/40/40 rear seats.

Under the hood, the G06 X6 comes fitted with petrol and diesel engines, all turbocharged. They range from the base model with 3.0-liter inline-6 petrol with 335 hp in rear-wheel drive  (sDrive40i) or all-wheel-drive (xDrive40i). An optional engine is the Bi-turbo 4.4-liter V8 petrol engine with 523 hp that powers the M50i, the X6 M, and M Competition models. But on the X6 M, it’s tuned to produce 625 hp and 553 lb-ft of torque. The Competition can accelerate from 0 – 100 kph in 3.8 seconds. These engines are mated with an 8-speed automatic transmission as standard.

The BMW X6 introduced to the automotive world a niche never heard of. Several years later the market is flooded with several other crossover coupes but the X6 is ahead of the pack and defying norms and practicality. The X6 is a car that can be used as a comfortable car for long trips, a performance car with off-road abilities, a luxury status symbol, and a fashion statement.

We at BE FORWARD have a stock of 200+ used BMW X6 listed for sale. Please visit our website and find your next BMW X6.