Accept
TOP  >  Car Review  >  Everything About The Toyota Mark II 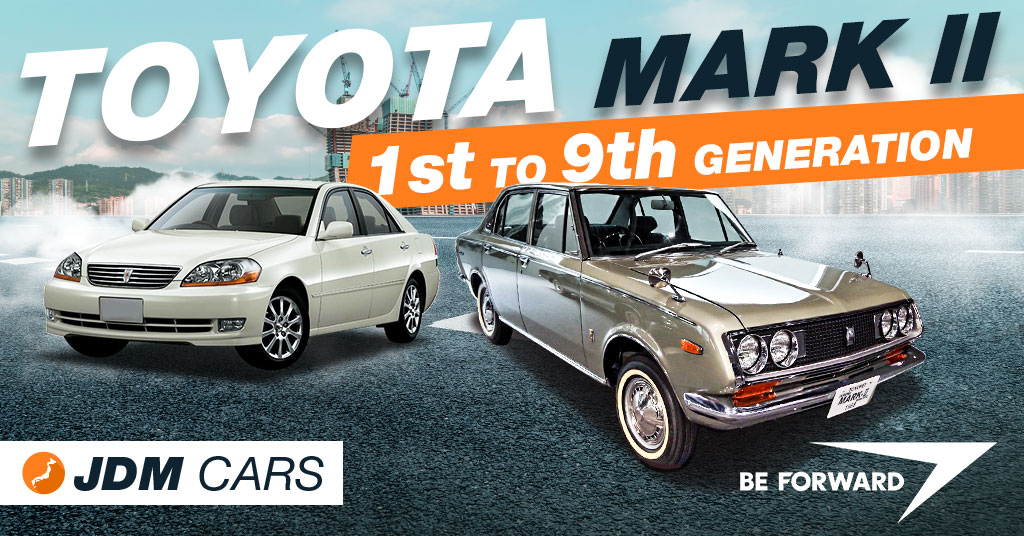 The Toyota Mark II was released in 1968, marketed as the Toyota Corona Mark II, and in other markets, it was known as Toyota Cressida between 1976 to 1992 across 4 generations.

The Toyota Mark ll is a compact sedan, later a mid-size sedan with a coupe offered later as well. The Mark II was sold with two engine choices: a 2.0-liter and 2.5-liter petrol engine.

The 1st generation Toyota Corona Mark II was introduced in 1968, Toyota sought to provide a car that was just below the Toyota Crown with regards to maximum engine displacement and car dimensions. The Mark II shares its platform with the Corona sedan but the Mark II is slightly wider and larger. it was limited to Toyopet Store locations and offered as a rival to the newly introduced Isuzu Florian, the Nissan Laurel in Japan, and the Datsun 510/Nissan Bluebird internationally that appeared in 1967, and 2 years after the Mazda Luce in 1966.

The second generation came equipped with a 1707cc I4 6R engine for the local market and the 2563cc I6 4M engine for export. The engine we are reviewing today is a 2.5 L 1JZ-GTE turbocharged petrol I6. The 1JZ-GTE: a 2.5L, I6, 24 valves VVT-i powered by a turbocharger produces 280 lb. ft torque and 280 horsepower. The 2.5L 1JZ-GTE engine is available in rear-wheel drive only but other engines are available with 4 wheel drive linked to a 5-speed manual or 4-speed automatic transmission.

The interior design of the Toyota Mark II is amazing and so attractive. Some variants feature some wooden finishing on the dashboard and doors with a tan color. The instrument panel, seats, and roof are color coordinated in dark and light shades to make a comfortable interior space. The interior is satisfactory and spacious for a 5-seat roadster.

While the Toyota Mark II is fashioned for a compact outer appearance, sufficient interior space has been provided, and extended window areas have been incorporated to give the car a bright feeling. Comfort has also been improved through a quieter ride, achieved through a design that a series of noise-reducing measures have been taken including the reduction of engine noise, drone, and wind noise in order to ensure a much silent ride.

The Mark II’s interior developed from the basic concept of “big inside, small outside,” the new version combines a compact-looking exterior with an interior that provides more comfort and room.

Seats with fine cushions have been mounted in the Mark II, while the driver’s seat is vertically adjustable with rubber supports. Speakers are located on the door panels on each side, to greatly boost total excellence.

The Mark II exterior styling features a low-beltline, low-hood, profile setting the basic tone, the new styling represents a further improvement in terms of visibility, comfort, and aerodynamic characteristics. For the Mark II body, a style featuring 6 side windows was adopted to emphasize openness and brightness. The hardtop body has 4 doors and is designed to combine stylish form with utility. In 2002 minor changes were made again with a new grille, headlight, and a redesigned bumper to freshen up the front end while at the rear there are new taillights.

There are nine generations of the Toyota Mark II and every generation has its own flavor.

The first generation started in September 1968 with chassis codes T60 and T70. The T60 & T70 planned as alternative versions of the already established luxury sedan, the Crown, sold at Toyota Store dealerships, and the smaller Corona, also available at Toyopet Stores. The first generation came with a body style of a 4-door sedan, 5-door station wagon, 2-door coupe, and 2-door coupe utility. As mentioned above, the production started in 1968 to 1972 and in April 1968 to July 1974 coupe utility was established.

The Mark II was slightly larger than the Corona with a higher level of equipment offered at the time, sharing some of the features of the larger Crown, but taking the top position at Toyopet Store locations.

The production of the second generation Mark II started from 1972 to 1976 and was based on a new X series platform, thus withdrawing the previous T series chassis. The inline 6-cylinder “M” series engine was copied from the S60 series Crown, in order to compete better with the Nissan Laurel in Japan and the Datsun 610 /Nissan Bluebird in North America.

The design used on the 2nd generation was dramatically different from the first, showing matches to the S60 series Crown.

The fourth generation started from 1980 to 1984 and is still called the Mark II but many of the ads at the time simply refer to it as the Mark II. The 2-door coupe was no longer manufactured in this generation, swapped by the Soarer, and the 4th generation was only available with 4 doors, either as a hardtop, sedan or as a station wagon.

From 1984 to 1988 the fifth generation Mark II was introduced. The X70 Mark II replaced the preceding X60 Mark II. This generation had a lot of competitors including the Nissan Leopard, as well as the traditional competitor Nissan Laurel sedan.

There are 2 different variants of the Mark II; the Sedan and Hardtop. The appearance is different on the exterior while the interior remains the same. Exterior differences on the Hardtop version include a slanted nose which requires a thinner headlamp assembly that matches the slanted nose, a new grille, a thinner tail lamp, frameless door windows, front fenders, and a bumper. The body panel is stamped differently from the standard version.

The Mark II and its sister cars received the powerful Twin-Turbo version of the 1G I6 in October 1985. This 182 hp (136 kW; 185 PS) engine made the earlier turbocharged M-TE engine extra and it was discontinued.

From 1988 to 1995 the sixth generation of the Toyota Mark II was introduced in the market, the X80 Mark II replaced the X70 Mark II.

The production of the seventh generation started from 1992 to 1996 and was called the X90-series. It received new rear bumpers, front bumper (including grill), and taillights, and some weight mainly due to regulations. The Mark II had also grown.

The X90 series was available in 6 different grade levels. All grades came standard with fully faux wood interior paneling and automatic air conditioning. The GL grade was available in either normal or automatic with a choice of a petrol or diesel 4-cylinder engine. The diesel engine was now built-in with electronic fuel injection and had lower NOx emissions. The 7th generation was fitted with either a 1.8L 4S-FE petrol I4, a 2.0L 1G-FE petrol I6,  a 2.5L 1JZ-GE petrol I6,  a 2.5L 1JZ-GTE twin-turbo petrol I6,  a 3.0L 2JZ-GE petrol I6, or a 2.4 2L-TE turbo-diesel I4.

The same as its predecessor, the X100-series Toyota Mark II was available in many trim levels. In this generation, Toyota introduces all-wheel drive to Grande G and Grande as well as the use of Toyota’s new VVT-i system on its engines. Also a new electronic traction control system and the standardization of ABS.

The Grande grade level had an excess of options and features available not limited to but including standard ABS, traction control, tilt-adjustable steering, and an all-wheel drive.

This is the last generation of Mark II, it introduced several new technologies for Toyota. This version of the JZ series engine features a redesigned head to optimize performance and fuel economy. Along with the 1JZ-FSE, the 1JZ-GE, 1G-FE, and 1JZ-GTE are available and all with VVT-i technology. This generation of Mark II also gains a new feature called Navi AI-shift, which uses GPS signals and shifts the automatic transmission into the appropriate gear. This last generation of the Mark II was powered by either a 2.0L 1G-FE petrol I6, a 2.5L 1JZ-GE petrol I6, a 2.5L 1JZ-FSE direct-inject petrol I6, or a 2.5L 1JZ-GTE turbocharged petrol I6 with a body style of a 4-door sedan.

Toyota keeps the Mark II fresh with spacious seating, generous cargo capacity, and excellent riding experience. Another good thing is the large cabin.The Toyota Mark II is a semi-luxurious and enjoyable car that’s easy to live with for a fair fuel economy. If you are looking for the best Mark II version that you can purchase, Toyota Mark II with a 2.0L engine is one of the high-end options. Purchasing them from Japan to anywhere is not a hassle nowadays. All you need to do is to visit BE FORWARD.

ALL TOYOTA MARK II FOR SALE