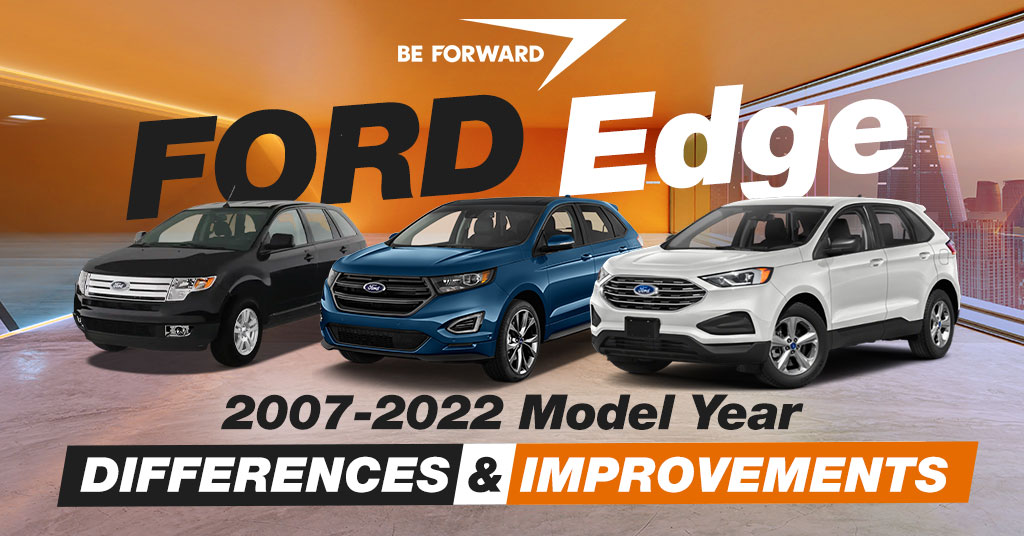 The Ford Edge is a crossover SUV produced by the American automotive company Ford. The edge was unveiled in 2006 for the 2007 model year. Its name was derived from a Ford Ranger trim package and is positioned to capture the market between the Ford Escape and the Ford Explorer.

In this article, we will briefly take a look at the evolution of the Ford Edge. We will try to make it as enlightening as possible. Please follow through.

Ford unveiled the first generation Ford Edge in 2006 for the 2007 model year. It was available in four trims which are; SE, SEL, Limited (SEL Plus), and Sport.

The exterior styling of the 2007 Edge was bold at the time. Its front fascia consisted of a grille with three chrome slats and odd-shaped headlights. On the sides, the high beltline and small windows made the car look smaller than it really was. At the rear, dual exhausts protrude underneath the rear bumper.

Inside, Ford fitted the Edge with a nice and neat dashboard, with the instrument panel consisting of two large and two small meter instruments for speedometer, tachometer, fuel gauge, and coolant temperature respectively. Below the fuel and coolant temperature gauge, there is a small digital screen for the odometer. The center console hosts the infotainment unit, two air vents, and the climate controls knobs at the top, while at the bottom there is a small tray for holding items such as keys, coins, or phones, two cup holders beside the transfer shift, and a covered deep center bin between the front seats that also serves as an armrest. The base SE trim comes with cloth upholstery with leather and contrast stitching as an option. The seats are comfortable and supportive, with both front and rear seats having the reclining feature.

The Edge has two seating rows with enough space to accommodate five adults and the cargo space is large with a low load floor. There is also enough leg-, head-, knee-, shoulder-, and foot room for all occupants.

Under the hood, the 2007 Edge came fitted with a 3.5-liter V6 petrol engine with 256 hp. This engine was mated to a 6-speed automatic transmission only. Front-wheel drive was standard, with all-wheel drive an option.

Exterior changes were mostly cosmetic, with changes including a new F150-inspired grille with space between the three horizontal chromed slats and new headlights. On the sides, the presence of the new 22” light-alloy wheels can’t go unnoticed. The Sport trim comes fitted with a black grille and smoked headlights.

The interior was also upgraded, the dashboard was redesigned and a new instrument cluster that incorporated an analog speedometer flanked by two 4.2-inch MyFord Touch LCD car information displays. On the center console, the 2011 Edge was fitted with an 8.0-inch infotainment touch-screen.

Under the hood, the Edge received two new engines with the existing gaining extra power. The turbocharged 2.0-liter 4-cylinder direct injection with 240 hp and the 3.7-liter V6 petrol with 305 hp, while the existing 3.5-liter V6 now has an output of 276 hp. These engines were mated to a 6-speed automatic transmission.

Ford unveiled the second-generation Edge in 2014 for the 2015 model year. The 2015 Ford Edge was built on the Ford Fusion platform and is available in five trim levels which are; SE, SEL, ST-Line, Titanium, and ST.

The 2015 Ford Edge was redesigned and it grew by several inches in all directions but its width remained the same. Its facial has a new trapezoidal Explorer-like grille and new headlights. At the rear, the Edge is fitted with a new stoplight with a thin strip that runs the whole width of the car from the new LED combination taillights. A spoiler for improved aerodynamics is fitted atop the power liftgate and twin exhaust pipes underneath the rear bumper still exist.

The interior of the 2015 Edge is much better than the previous model, thanks to the growth in size. The dash is made of smooth plastics, the instrument cluster incorporates two large round instruments for the speedometer and tachometer with each having a small gauge for fuel and coolant temperature respectively. Between the large instruments, there is a small information LCD screen. The seats are comfortable and supportive with cloth upholstery as standard. Higher trims come with a power driver’s seat and dual-zone automatic climate control. The center console has a small covered storage tray at the top followed by a MyFord Touch infotainment touchscreen system. Storage-wise the Edge is so generous with the power liftgate unleashing a large cargo area with a flat load floor.

Under the hood, the 2015 Edge had several engine options, starting with the twin-turbo 2.0-liter 4-cylinder petrol with 250 hp as standard, followed by a twin-turbo direct-injection 2.7-liter EcoBoost V6 petrol with 315 hp, and a 3.5-liter unit previously used but with reduced power. An optional turbocharged 2.0-liter TDCI diesel engine with 210 hp was also available, mostly on the European models. These engines are mated to either a 6-speed automatic, 6-speed manual or 6-speed dual-clutch automatic transmission. Front-wheel drive is standard and all-wheel-drive is an option that comes with an electronically controlled clutch, that engages faster than a human eye can blink, and is capable of transferring power between the front and rear axles, sending 100 percent power where it’s needed, be it the front or back.

In 2018 the Edge received a mid-life refresh for the 2019 model year. It was available in SE, SEL, Titanium, and Sport.

Inside, the interior 2019 Edge is well finished with a touch of standard luxury enough to rival other luxury cars, and a cabin that is quiet, a ride that is steady, and agile handling. The center console is fitted with an easy-to-use Sync 3 infotainment system.

Under the hood, the 2019 Edge comes fitted with a standard twin-turbo 2.0-liter 4-cylinder with 250 hp. The ST trim is powered up by an uprated version of the twin-turbo 2.7-liter V6 previously used in the previous Edge Sport. It produces 335 hp and can accelerate to 100kph in less than 6.0 seconds. These engines are mated to an 8-speed automatic transmission and either front- or all-wheel drive.
The previous naturally aspirated 3.5-liter V6 from the Edge; has been discontinued.

The received another mid-life update in 2021 with upgrades including the introduction of Ford’s Sync 4 infotainment system with a 12-inch touchscreen display, conversational voice recognition system, and wireless Android Auto and Apple CarPlay connectivity. A spare tire is now an option

Other changes were just cosmetic, not that significant.

Under the hood, the 2021 model was fitted with the twin-turbo 2.0-liter engine previously used mated to an 8-speed automatic transmission.

Although the Ford Edge is young among Ford’s model lineup, it has managed to establish itself as a prominent model by sales volume. The Edge is a car that offers a spacious cabin, guaranteed comfortable ride quality, generous standard tech features, and power and driving excitement.

We at BE FORWARD have a stock of 175+ used Ford Edge in our stock listed for sale. Please visit our site and check out the listed cars to choose the car of your choice.