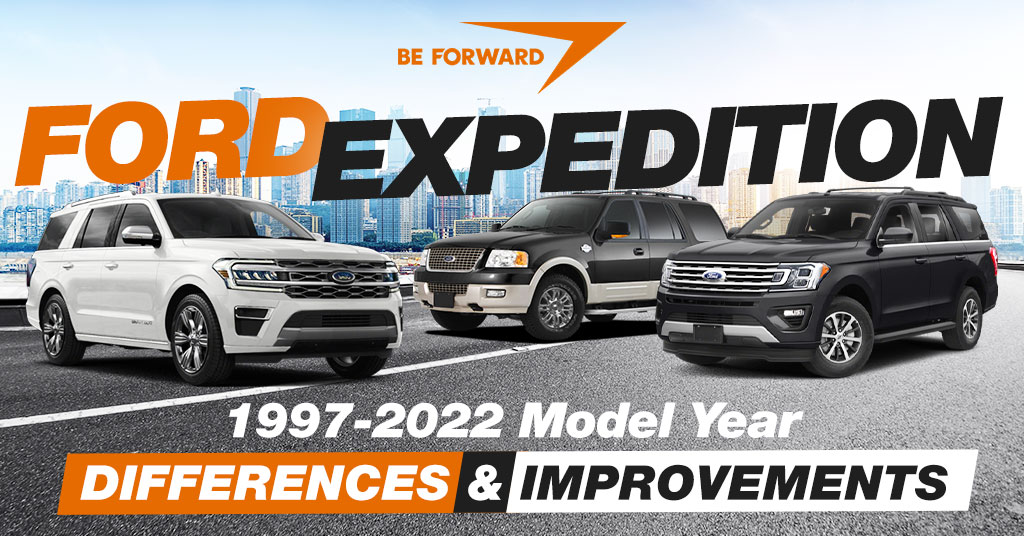 The Ford Expedition is a full-size SUV manufactured and marketed by the American automotive manufacturer Ford. The Expedition was introduced in 1996 for the 1997 model year in a five-door configuration to succeed the three-door Ford Bronco.

The Ford Expedition has been sharing the same platform with the corresponding generation of the Ford F-150 which also included sharing some mechanical and body components.

In this article, we will take a brief look at the Ford Expedition generations in trying to learn how the vehicle has evolved throughout its production life. Please read on.

Ford introduced the first-generation Expedition in 1997 as the successor of the Ford Bronco. The Expedition became the first full-size Ford SUV in a five-door body.

Exterior looks of the ford included a front fascia with rounded horizontal headlights, a mesh-grill surrounded in chrome or body color, and a chromed bumper beneath it. Illuminated running boards and side steps were optional.

Inside, the Expedition came in a two-row five-seat configuration with a third-row eight-seat configuration as an option. The first row seats are captain’s chair seating, the second row has a bench seat with captain’s chair seating as an option, while the optional third-row seat is always a bench. Cloth upholstery is standard with leather as an option. Other standard and optional features include dual-zone climate control, a power moon roof, heated side-view mirrors, and Ford’s Mach audio sound system with rear subwoofer.

The second-generation Expedition was unveiled in 2002 for the 2003 model year. This model featured a four-wheel independent long-travel suspension system which was something new in a full-size SUV.

The release came with a new look with its facial featuring a redesigned mesh-grille with a chrome borderline and Ford’s blue-oval badge at the center. Front panels and headlights styling inspired by the F150. At the rear, the Expedition has a big liftgate with blacked-out D-pillars that create the impression of a wrap-around window on the trunk area.

Inside, the Expedition comes with cloth seats as standard. Higher trims add wood-grain and leather seats as an option. Three-row seating is now standard with an all-new manual (Power-assisted PowerFold fold-flat is optional) fold-flat stowaway setting. This solves the need for owners having to remove the third-row seat for extra storage space.

The cabin is versatile, it allows the vehicle to be configured into a sleeping place or a minivan, it has also received better insulation than before, making it much quieter.

As in the previous models, this model’s designers were inspired by the F-150 from which they borrowed the cues. The front end now features Ford’s signature three “hollow-bar” grille and new multifaceted headlamps. Other features are side-view mirrors with LED indicators, sleeker bodywork, and redesigned tail lamps.
In 2015 the Expedition was redesigned with changes including a new three-bar grille with step-stacked bars, new thinner headlamps, and a new front bumper with a large lower air intake, a lower chrome bar, and LED fog lamps.

The interior comes in an eight-seat 2-3-3 configuration as standard with the option of two captain seats on the second row with a passage-through in between to the rear three-seat bench. The size of the cargo with all seats up is 526 liters, with the third row folded, it increases to 1557 liters, and with the second and third-row folded flat you get 3066 liters.

The Expedition is powered by a 5.4-liter Triton V8 petrol engine with 300 hp and 365 lb-ft of torque. This engine is paired to a 6-speed automatic gearbox as standard. It was available with a front- or all-wheel-drivetrain.

The Expedition was upgraded in 2015, this upgrade saw the introduction of a new twin-turbocharged 3.5-liter 24-valve DOHC Ti-VCT EcoBoost V6 petrol engine with 365 hp and 420 lb-ft of torque as the only available engine, with the V8 engine no longer available.

In 2017 Ford released the fourth edition of the Expedition as a 2018 model which featured improved technology, comfort, and safety.

This Expedition comes with eight seats (2-3-3 arrangement) in three rows as standard, or with a seven-seat (2-2-3 arrangement) option which features second-row captain seats. Inside, the cabin is spacious, looks handsome, and is well built with lots of storage spaces for both front and second-row seats.

Comfort-wise, the powered seats with a cooling and heating function have good lumbar support, and the 2nd and the 3rd-row seats offer awesome head- and legroom.

Access to the 3rd row is made easy by the 2nd-row electrical seat which folds at the push of a button, a function also available on the 3rd-row seat which could also be folded by pressing a button located in the cargo area.

The 1998 Expedition came fitted with a twin-turbocharged 3.5-liter EcoBoost V6 petrol engine with 375 hp and 470 lb-ft of torque paired to a 10-speed automatic transmission.

From this article, we have learned that the Ford Expedition is a large SUV with very good ratings in terms of practicality, performance, durability, and reliability. It’s among the best in the class. Available as a two- or three-row SUV, it offers spacious seating and plenty of cargo room. To add to that, the Expedition also has composed handling for a vehicle of its size.

Please visit BE FORWARD and check out our list of 150+ used Ford Expedition on sale.