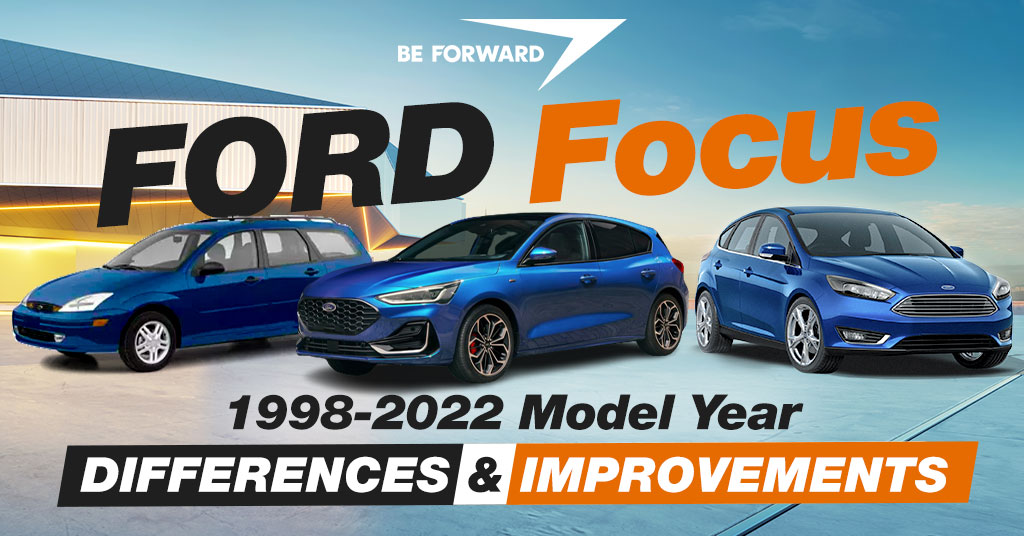 The Ford Focus is a compact car manufactured by the American automotive manufacturer Ford. The Focus was introduced in Europe in 1998 where it was built by Ford Europe.

The Focus was later introduced in other markets worldwide and kept on evolving with each generation coming with a wealth of technologies and cutting edge design that gave the Focus an edge in its class.

Here we will take a brief look at the evolution of the Ford Focus. Please read on.

In 1998, Ford introduced the Ford Focus initially as a 5-door hatchback with a 3-door hatchback, 4-door sedan, and 5-door wagon following later.

The Focus was built around Ford’s new-edge-design philosophy that gave the hatchback a triangularly-shaped exterior, with curved lines that emerged into sharp angles at the front. Its roofline is arched and curvy, while at the rear it’s sloped with the tailgate attached at the top.

Inside, the dash is neat and simply laid out with the instrument panel protruding in sharp angles inline with the rest of the panel. The front seats have plenty of legroom and headroom, but the rear seat is a bit limited, especially for tall passengers.

Control buttons are intuitive and easy to use. The Focus has plenty of storage options and a good driving position.

In 2001, the Focus was upgraded with most of the changes being cosmetic. Notable changes included new headlights with lenses that improved the night-driving visibility, turn signals moved from bumpers and were now enclosed in the headlights, and a wider grille was installed on the lower apron to increase cooling capacity.

The Focus comes with a wide choice of diesel and petrol engines offering something for everyone. The base engine is the 1.4-liter petrol engine, while optional engines are the 1.6-liter, 1.8-liter, and 2.0-liter Zetec petrol and the turbocharged 1.8-liter diesel engine. These engines are paired with a 5-speed manual gearbox or 4-speed automatic transmission.

In 2004, Ford released the second generation of the Focus. This model was much larger and heavier than its predecessor.

The facial features triangular headlights, but a bit small compared to the previous model which left room for a much broader and wider grille. The profiled V-shaped hood runs from the A-pillars to the grille which is a bit bigger.

The second iteration Focus has a neatly designed cabin with finishing done with soft-touch materials. The interior appearance has tremendously improved with much attention given to detail – most notably around the instruments.

The driving position is great with plenty of adjustment, especially models with power-adjustable seats. The cabin is more spacious and comfortable thanks to this model’s growth in size that provided enough room for five adults with plenty of head and legroom for all occupants. The seats are comfortable and the cabin is very quiet and at the rear, there is more space for cargo.

The most significant upgrade on this model is on safety, which earned it a top spot in its class in the EuroNCAP crash-tests results.

There is also a 5-door Focus high-performance ST-version released in this generation.

In 2010, Ford unveiled the third generation of the Ford Focus. This model was available in three body styles: hatchback, sedan, and station wagon.

The Face of this Focus featured a new hexagonal radiator grille flanked by long and thin headlights that added some refinement to the car. At the rear, this focus came fitted with a spoiler at the top of the tailgate making the car more aerodynamic, and the taillights were designed with the middle side longer than the lower and upper sides.

The interior of the Focus is attractive and ergonomic, although the earlier models on this generation featured fiddly buttons, later releases came with a 4-inch infotainment system as standard, and an 8-inch touch-screen system as an option. Other features included Bluetooth and Ford’s SYNC connectivity package with voice control and navigation. The driving position is great, and the steering column is rake-and-reach adjustable enabling the driver to find a decent driving position.

The seats are comfortable and supportive, with enough space upfront while rear space is limited, and the large transmission tunnel at the center robs the rear passengers of some legroom.

This Focus came fitted with a choice of petrol and diesel engines. Petrol engines included the 1.6-liter as the base, the turbocharged 1.0-liter I3 Ecoboost with either  99 hp or 123 hp and the turbocharged 1.5-liter I4 Ecoboost as options. Diesel options were the 1.5-liter TDCi with 105 hp and the 2.0-liter TDCi with 150 hp. These engines were paired with either a 6-speed manual or a 6-speed dual-clutch automatic transmission.

There were also a couple of high-performance Focus ST models available which are the 2.0-liter with 182hp diesel or the turbocharged 2.0-liter with 247 hp petrol engine, both paired to manual gearboxes, and the super-sporting Focus RS launched in 2016 with a 2.3-liter engine with 345 hp that transfer power to all four wheels.

Ford released the fourth generation Focus in 2018. This model like the previous is still a competent and well-rounded car. It’s available as a sedan, hatchback, and wagon.

The 2018 Focus has sharper and sleeker looks than before. The 2018 Focus hatchback has a lowered roof and a spoiler is placed at the top tailgate making the car more aerodynamic. The front still features a hexagonal mesh grille with long and thin headlights that give the car a sporty look.

The cabin is comfortable and quiet with room for five. Its long wheelbase provides legroom for all passengers, and headroom is also great. Features found on this model include a 4.2-inch central display, dual-zone air-conditioning, a tilt-telescopic steering wheel, a height-adjustable driver seat, a rearview camera, 60/40-split folding rear seats, power locks and mirrors, keyless entry,  power front windows (manual rear windows), Ford’s MyKey, voice controls, a four-speaker sound system with USB port and Bluetooth, while higher trims get an 8″ touchscreen infotainment system with SYNC3 that supports Android Auto and Apple CarPlay as an option.

The Ford Focus is a car that has a practical shape, an affordable purchase price, and offers a good driving experience combined with excellent real-life fuel economy. The Focus has also proven to be reliable, durable, and efficient. So if you are looking forward to buying a used car, then the Ford Focus will be a great choice.

Please visit BE FORWARD and check out our list of used Ford Focus on sale.