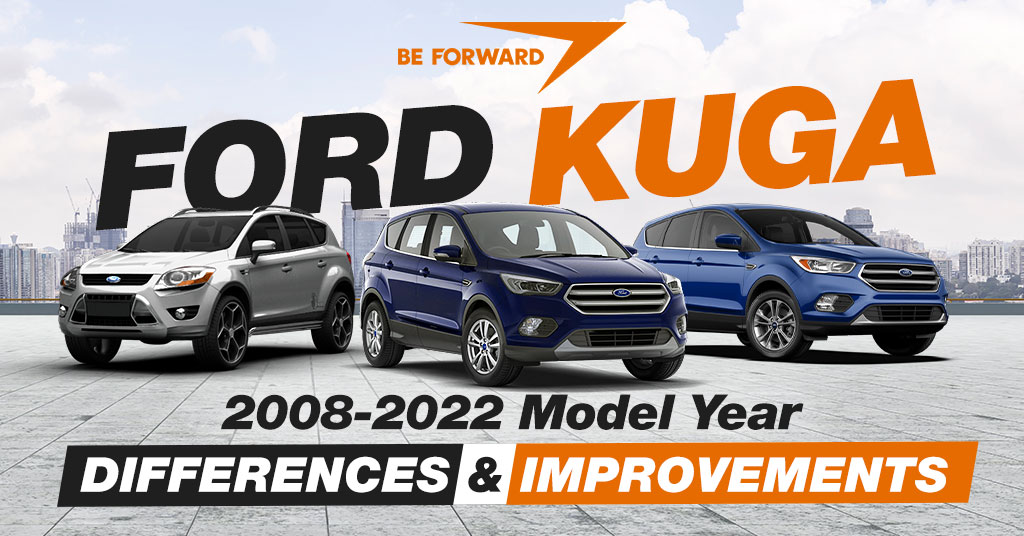 The Ford Kuga is a five-door compact crossover SUV manufactured by Ford Germany a subsidiary of the American automotive manufacturer Ford since 2008.

The Kuga currently in its third generation was originally aimed for the European market, but from 2012 it was made available as a 2013 model on the North American market as the Ford Escape. The Kuga is available in front-wheel drive or four-wheel drive drivetrains.

Here we will briefly take a look at the evolution of the Ford Kuga just to shade some light. Please follow through.

The Kuga is designed with a good balance between nuggety cuteness and sporting aggression. The 2008 model had a sleeker shape with some notable detailing around the body. It successfully toned down the muscular off-roader image and looked modern.

The interior layout of the Kuga is simple and stylish with a center console adorned in silver giving the car an upmarket feel.

The Kuga is a comfortable car with a refined, quiet but small cabin. The front sports seats are supportive with enough legroom, while the rear seats will be better for three kids, but not for adults as there is not enough legroom.

The rear seat has a 60/40 split-fold mechanism that creates a flat cargo area to maximize the load space. Underseat storage is available beneath the rear seat with additional storage under the floor of the luggage compartment area. The Kuga has a 410-liter boot with seats in place which extends to 1,355 liters with rear seats folded flat.

The second generation of the Ford Kuga was released in 2012 as a 2013 model. It was cheaper, bigger, and offered more technology than its predecessor.

This 2013 Kuga is handsomely sculpted and looks athletic. Compared to its predecessor, this model has a 2.8-inch longer wheelbase and its width grew by 1.3 inches. This dimensional growth provides more interior space, while its decrease in height by 1.6 inches gave the car a sleek exterior look.
In 2017 the Kuga received some makeup with interior and exterior cosmetic changes which include a bigger, taller, and wider grille, new headlamps with LED DRL’s and fog lamps. The rear end was upgraded as well with a redesigned rear bumper and taillights.

The cabin of the 2013 Kuga came fitted with high-quality materials and a modern-looking dash emphasized by the gloss black finish that gave it a premium feel. There were also lots of storage spaces, including big side bins and a large glovebox.
In 2017 the Kuga was refreshed, interior changes included the introduction of Ford’s SYN3 infotainment system with an 8-inch touch-screen display. Other interior changes include a reclining second-row seat which is also much easier to fold down, better rear-seat legroom, the addition of the MyFord Touch electronics interface, and a “hands-free” power liftgate.

In 2009 Ford released the fourth generation Kuga as a 2020 model. This model was built on Ford’s C2 platform, which made the car lighter, stronger, and larger than before.

The curvier front end of the 2020 Kuga features a wide and bold grille flanked by LED headlights with athletic character lines running along the sides. At the rear, there is a large rear spoiler at the top and twin sports exhaust pipes. Collectively these features give off the appearance of a uniquely refined crossover SUV.

Inside the 2020 Kuga, there is a good level of quality materials and a simple and easy-to-navigate dash layout that also houses a 12.3-inch digital instrument cluster. Ford’s SYNC 3 infotainment system with an 8-inch touchscreen is standard across the range. This Kuga has ample leg-, knee- and shoulder room due to the growth in size. The cargo area also grew with several other storage options also available.

With this release, Ford introduced hybrid models as well which include the turbocharged 2.0L MHEV EcoBlue mild-hybrid with a 48-volt system, plus the range-topping 2.5L plug-in hybrid. These engines were paired with either a 6-speed manual, 6-speed PowerShift DCT, 8-speed automatic, or CVT transmission.

The Kuga is a car with fun handling, sharp to drive, and practical. From this article, we have learned that the Kuga has been improving generation after generation with each generation addressing the shortcomings of its predecessor. But all in all every Kuga is a car that is reliable, predictable, efficient, and durable.

Please visit BE FORWARD to check out our list of 100 + Ford Kuga’s (also known as Ford Escape in other markets from 2013 and beyond models) to find out the right car for you.