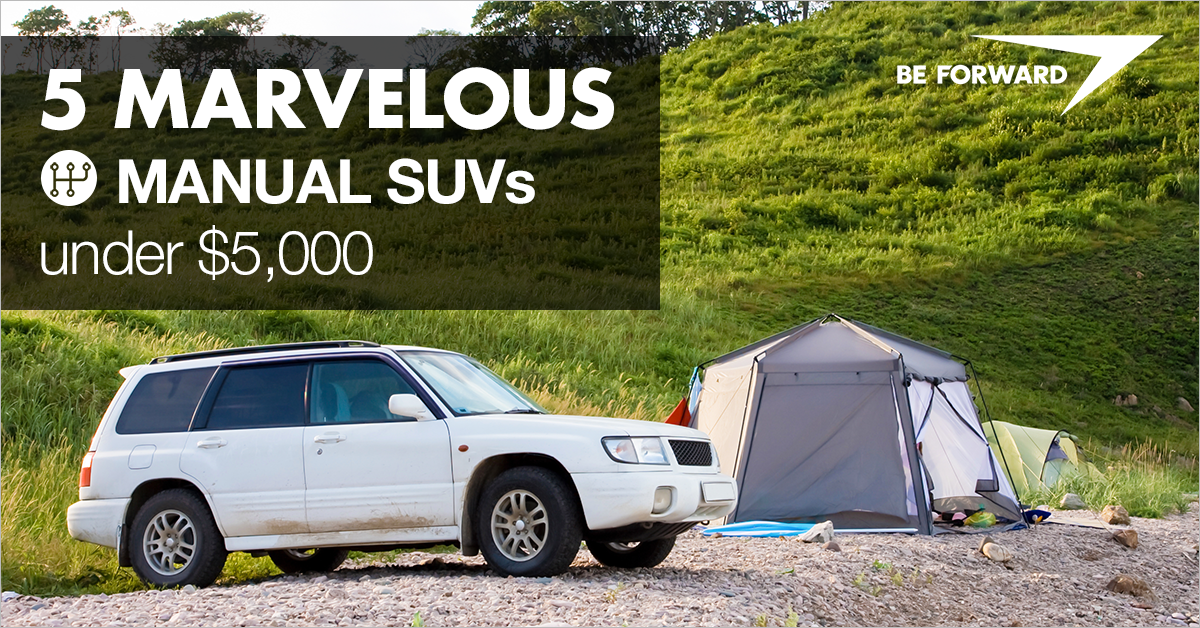 For those in the market for a used manual car, one of the top choices of car type for many would have to be the SUV. With the addition of 4WD capabilities, it could be said that you are only truly unleashing the power of your SUV when it runs on manual gears. Think that manual SUVs are more expensive than their automatic counterparts? Think again! For the love of the clutch and the stick, here are 5 of BE FORWARD’s best-selling used manual SUVs under $5,000, which also happen to be some of the best cheap manual cars on the market.

Top 5 Best-Selling Manual Transmission SUVs for Under $5,000 at BE FORWARD

There are plenty of quality SUVs that allow for a manual transmission. Here are the best available from BE FOWARD. Click to learn more about their features and used pricing.

In production since 1994, the popular Toyota RAV4 has only become better with time and is a particular darling on the used market thanks to its compact size, range of features, and overall power. If you’re after a manual edition of this SUV model, you will most likely only find it from those manufactured before 2006 as Toyota has tended to lean towards automatic models in recent years.

The interior of the Toyota RAV4 is simple, straightforward, and appealing. While it lacks a number of luxury features that top-of-the-range SUVs come with, it still offers a bountiful number of standard features in addition to incredibly accommodating front and rear head and legroom that allows even the tallest of people to ride in comfort.

Cabin storage is available in the form of door pockets, the center console, glove compartment, cup holders and other small compartments. Additionally, driver comfort is assured thanks to an adjustable seat. Other interior features include air conditioning, cruise control, airbags, stereo and speakers as well as an easy-to-read instrument cluster facing the driver directly.

As with its interior, the exterior of the RAV4 is simple and functional, but with a charm all its own. This compact 5-door SUV offers high ground clearance, fog lights, bumpers that match the color of the body, and a pronounced front grille. As a plus, many models come with alloy wheels, which further add to its aesthetic appeal.

The average Toyota RAV4 engine offers 2.4-liters and 166HP, with a fuel consumption of roughly between 11.8km/L and 13.4km/L, depending on the age and model, and a petrol tank capacity of 60 liters. In the case of its manual variants, this is mated to a four-speed manual transmission. The manual clutch is also very responsive with gears that are easy to find and use, making driving this car indeed a lot of fun.

Small to medium-sized families looking to enjoy going off the beaten track every so often.

How Much is a Used Manual Toyota RAV4?

Currently in its 4th generation, the Subaru Forester is a low-riding, road-hugging SUV has often confused people due to it having the looks and handling of a wagon while at the same time incredible off-road capabilities. Coupled with features like a symmetrical all-wheel-drive, a manual gear Subaru Forester is indeed a joy to drive.

The interior of a Subaru Forester is indeed spacious, with a lot of legroom and headroom available. This 5-seater comes with a predominantly plastic interior, however its design makes this difficult to detect.

Leather seats, power steering, a lot of added storage compartments, and good visibility for the driver aid in making the Subaru Forester a unique favourite for many drivers.

On the exterior, the Subaru Forester is a 5-door SUV with alloy wheels, beautiful moldings and trims, halogen fog lights, roof carrier, and more. Its trademark feature would have to be the aluminum hood that scoops air and feeds it into the intercooler to enhance the performance. While some trims come with an added sunroof; others do not.

Under the bonnet you will find the popular Subaru Boxer engine, which is made of aluminum. This engine is also referred to as a horizontally opposed Boxer engine because its pistons move horizontally instead of vertically. The smallest engine made for the Forester is able to pump out 173HP, with others able to do much more. Its average fuel consumption equates to roughly between 10.4km/L and 16km/L, depending on its age and model. The manual transmission available is 5-speed, which is of course mated to Subaru’s popular all-wheel-drive. This is further mated with a limited-slip central differential which distributes equal power to the front and rear wheels – a 50/50 sharing of sorts.

Families and individuals looking for a uniquely designed SUV that doesn’t skimp on features.

How Much is a Used Manual Subaru Forester?

The average cost of a used manual Subaru Forester on BE FORWARD is between around $900 and $3,000*.

The Suzuki Jimny is a compact SUV, but do not let that turn you off—this nimble vehicle packs a punch and can handle all kinds of off-road trails with relative ease. The Jimny has been in its 4th generation since 2018 with the 1st generation in production between 1970 and 1981, and 2nd and 3rd generations offering various improvements in between.

Decked out in a combination of solid, easy-to-clean plastic and soft fabrics, the Jimny also offers convenient storage space in the form of the glovebox, door pockets, and centre console.

This car might look small in stature on the outside but looks can be deceiving—it can seat even the tallest of passengers comfortably.

From the exterior of the Jimny, you can see that it has a great amount of ground clearance. This compact SUV also boasts curved moldings and trims and is fitted with rounded headlights that are nicely pronounced alongside its small grille. Additionally, there are fog lights fitted onto the front bumper. When fitted with alloy wheels, the 3-door Suzuki Jimny becomes even more aesthetically appealing.

With a 1.3-liter petrol engine, this car not only enables you to go off-road, but it also saves you a good amount of money on fuel. Perhaps surprisingly, with its manual transmission this car can also reach a top speed of more than 100km/h! It is an all-time four-wheel drive vehicle and offers good handling alongside its average fuel consumption of between 13.8km/L and 16.4km/L, depending on the age and model.

Those looking for a fuel-efficient and easy to handle compact SUV that still packs some oomph.

How Much is a Used Manual Suzuki Jimny?

The Nissan X-Trail is a favourite of business executives, young professionals, and small to medium-sized families looking for a vehicle that has the capacities of an SUV without being overly boisterous about it. The Nissan X-Trail has been in its 3rd generation since 2013, however its 1st generation—2000 to 2007—has proven to be the most popular generation on the used car market.

The interior of the X-Trail is as good as Nissan gets, with comfortable seating aplenty in addition to a selection of standard and optional features that improve your drive. It is made to seat 5 people with a lot of legroom, headroom, and side space to spare.

Its boot space is also commendable and can fit around 1,996 liters with the seats folded.

The exterior of the Nissan X-Trail showcases a nice bumper that, depending on the trim, may be offered with or without fog lights, as well as an overall design that sports clean, curved lines that enhance the sense of ergonomics and motion. This is an impressive compact SUV that handles all the more better in its manual variants thanks to the greater feeling of control given to the driver, adding to its appeal and popularity.

If you are looking for a Nissan X-Trail fitted with a manual gearbox, the 2005 model offered with a 2.5L, 4-cylinder, 60-liter engine and on-demand 4WD, or all-wheel-drive, is a great option to consider. This particular model of the Nissan X-Trail is capable of an output of up to 165HP, with an average fuel consumption of between 9.5km/L and 20.6km/L, depending on the age and model.

Drivers looking for a solid, functional, and time-tested SUV with a great track record of safety and reliability.

How Much is a Used Manual Nissan X-Trail?

The Hyundai Tucson is undoubtedly one of this Korean car-maker’s most popular models; and from the interior space and handling through to the vast amount boot space, it is easy to understand why. Many users say that while the Hyundai Tucson is an SUV, it also offers the handling of a smaller car thanks to its smooth amount of roll and effortless handling around corners.

Inside the Tucson, you will find well-arranged and easy-to-access instruments on the dashboard for added convenience, in addition to an abundance of cabin storage from the large center console box, door pockets, and glove compartment. The available headroom is expansive, as is the leg space. The amount of driver visibility is also impressive, thanks to the wide and clear windshield, and side and back windows.

This SUV is a 5-seater, with around 643 liters of boot space that can be increased quickly by folding the second-row seats.

If you think the Nissan X-Trail looks good on the outside, for many the Hyundai Tucson makes it look pale in comparison. Alloy wheels, a bold, curved design, distinct bumper, and high ground clearance combine to make this SUV turn heads while out on the road. This is no doubt one of the best-looking compact SUVs packed with features that you can find today, especially for models fitted with 17-inch alloy wheels that furthermore add a touch of class to your ride.

Under the bonnet, the Tucson has s 2.0 CRDi petrol engine that is mated to a 5-speed manual transmission and all-time 4WD or front wheel drive. Of course, some later trims of the Tucson come with 2.7-liter V6 engine. The Tucson’s average fuel tank capacity is 65 liters, with a fuel economy between roughly 9.6km/L to 11.4km/L depending on the age and model.

Drivers who appreciate a sleek, modern design for their SUV, in addition to standing out from the crowd of Japanese-built vehicles.

How Much is a Used Manual Hyundai Tucson?

Looking for even more used manual SUVs to consider for your next purchase in addition to those listed here? Tap or click the button below to browse BE FORWARD’s daily-updated stock list of vehicles and find yourself spoiled for choice!