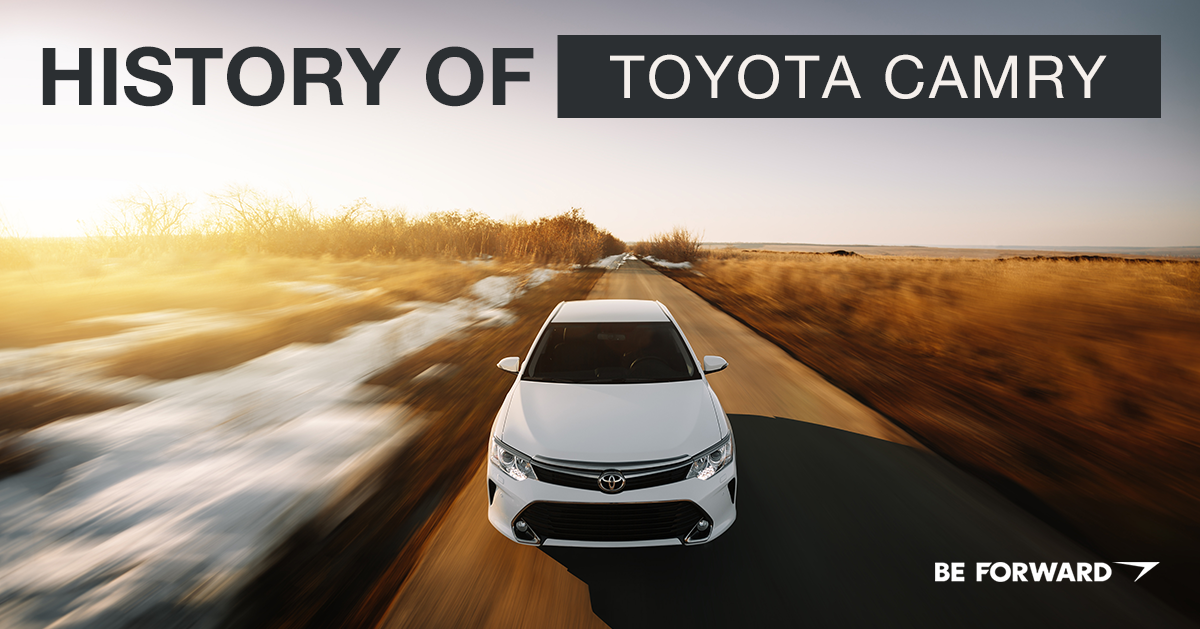 Toyota Motor Company, just like its lineup of reliable vehicles, has a long history, dating as far back as the early 1920s. Today, some model names are instantly recognizable, such as Corolla, the best-selling vehicle in the world since 1966, or Land Cruiser, synonymous with off-road capability and exceptional comfort. How can anyone forget the iconic Supra or the current best-selling workhorse, the HiLux? Indeed, Toyota’s lineup is full of outstanding vehicles, each one designed for its own niche. In combination with Toyota’s top-notch manufacturing processes, many of them have secured their places as “best” in sales, quality, value, or reliability, to name a few. 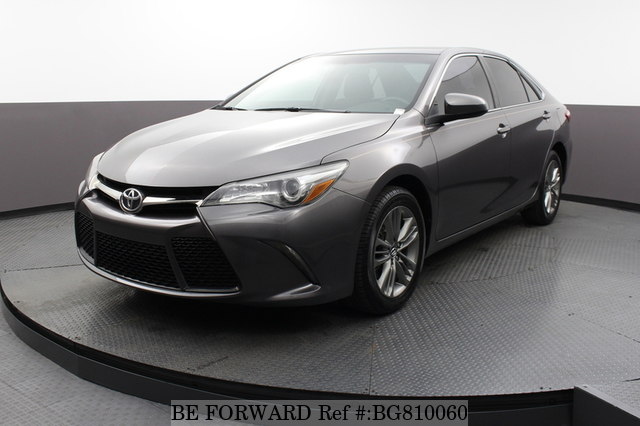 Above: A Used 2017 Toyota Camry from BE FORWARD

Like many of the other cars in Toyota Motor Company’s lineup, Toyota Camry has a long and special history, starting in 1979. Actually, in 1979, the first Camry was not a Camry, but a Celica, the Toyota Celica Camry, a sedan version of the popular Toyota Celica coupe. A couple of years later, in 1982, Toyota Camry started its own model lineup, which has continued to this day. Interestingly, the name “Camry” is an anglicized version of the Japanese “kanmuri,” which means “crown.” Camry thus joined a long lineup of other “royal” model names, including the Scepter, Tiara, Corolla, Corona, and Crown. 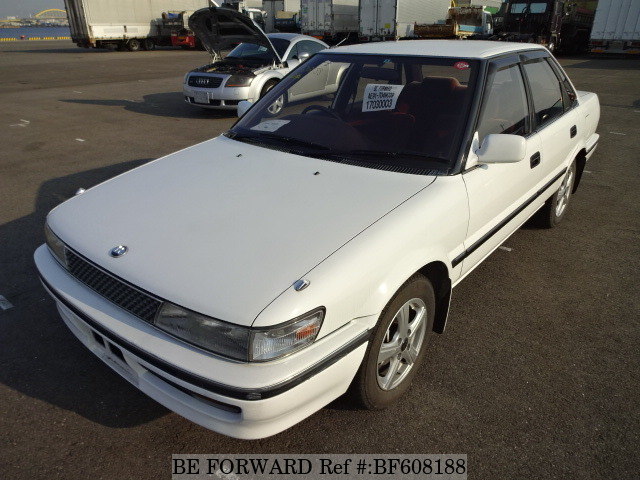 Above: A Used 1989 Toyota Camry from BE FORWARD

The first Toyota Camry sedan was a compact car, narrow in body and designed to fit the needs of a post-OPEC oil embargo world. For the first ten years or so, from 1982 through 1990, Toyota Camry made it through two generations as a compact car, at least outside of Japan. Offered as a four-door sedan or liftback, Camry became very popular, not only at home, but also abroad, in spite of it being somewhat overpowered by Japanese standards. The liftback was replaced by a station wagon after 1986, and V6 engines were added to the i4-powered lineup about the same time.

After 1990, as the rest of the world clamored for larger cars, Toyota Camry developed somewhat of a split personality. Depending on their destination, Camry was available in two body sizes. Those still produced for Japan were restricted, by tax regulations, to the compact segment. On the other hand, Toyota Camry produced for export was now classified as a mid-size sedan, 5 cm wider and 6 cm longer. In Japan, the same car, referred to as the wide-body Camry, was sold as Toyota Scepter. In 1993, a coupe version was released, which eventually spawned its own model line, dubbed Camry Solara. 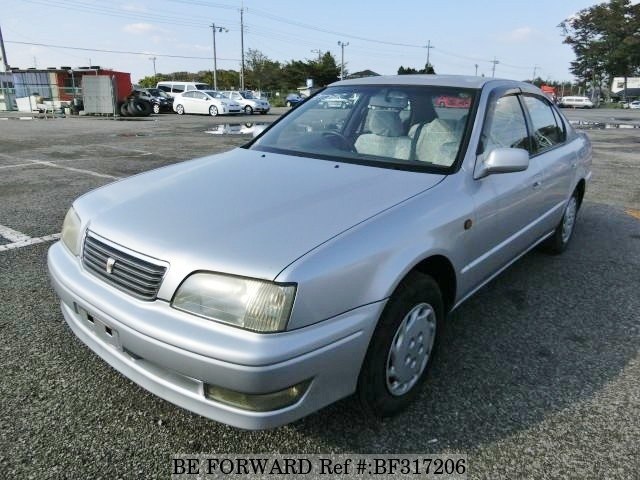 Above: A Used 1997 Toyota Camry from BE FORWARD

Toyota Camry’s split personality continued through the mid-1990s, when the compact Camry was renamed Vista, eventually to be discontinued along with the station wagon, which was falling out of favor with buyers, by 2001. Outside Japan, 1997 marked the year that Toyota Camry took the title as best-selling sedan in the United States, a post it has held ever since. That same year, Toyota Camry in Japan, surnamed Gracia from 1996 through 2001, adopted the same mid-size body style as for export markets, and both import and export models have been the same ever since.

For the first twenty years of its existence, Toyota Camry staged a number of firsts in the automotive world. For example, Toyota Camry, in a world of carbureted engines, was one of the first to offer standard fuel injection for better performance and fuel economy. By way of contrast, even Toyota Corolla carried carbureted engines, fuel injection being optional, until the early-1990s. Toyota Camry was also one of the first to popularize front-wheel drive vehicles, which was a relatively new concept for drivers outside of Japan when it was first introduced.

Throughout most of its history, Toyota Camry was offered with a dizzying array of powertrains, drivetrains, and body styles. Four-cylinder engines were offered in both gasoline and diesel, some of them turbocharged, and six-cylinder engines were added to the sport models. Manual and automatic transmissions, typically four- and five-speed variants, were fitted, most of them front-wheel drive, not including the few years that all-wheel drive was offered. Sedans, liftbacks, coupes, and station wagons all had their part to play in Toyota Camry’s history, but the final design, after twenty years, has finally settled. 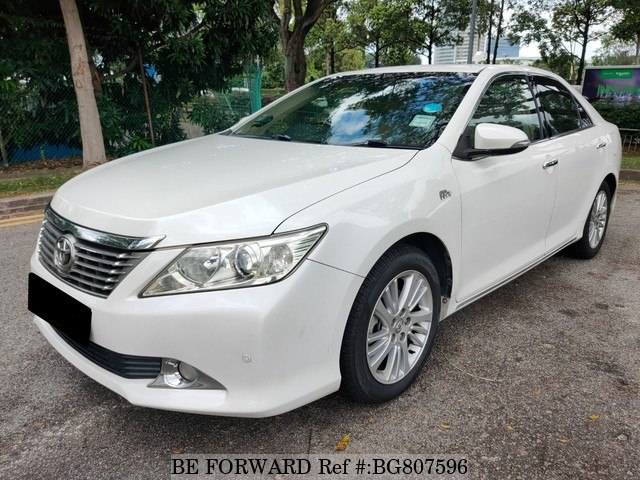 Above: A Used 2013 Toyota Camry from BE FORWARD

Today’s Toyota Camry has finally settled on offering a single body style, the four-door sedan, in a few different trim levels, and powered by highly-efficient four- and six-cylinder engines. Manual transmissions are rare, the latest generation not even offering them as an option, but a lot can be said for Toyota’s approach to the automatic transmission, one of the most refined and reliable in the world. In another first, Toyota released Toyota Camry Hybrid in 2007, the world’s first hybrid mid-size sedan, based on the hybrid technology first developed a decade earlier in the Toyota Prius.

Perhaps the best thing that can be said about Toyota Camry, no matter what year, is its outstanding value. Toyota Camry is world-renowned for exceptional build quality and reliability. Camry also includes many standard features that are more akin to what one would find in luxury car offerings, such as quality audio systems, satellite navigation, power windows and locks, and automatic climate control, to name a few. Toyota Camry is also exceptionally comfortable and quiet on the road, thanks to intense scrutiny by Toyota NVH (Noise, Vibration, and Harshness) engineers. Safety comes second nature to Toyota Camry, featuring standard anti-lock brakes, a full complement of airbags, and optional electronic stability control, standard by 2010, and even pre-collision mitigation systems. The most recent Toyota Camry models have a combined fuel economy of 8.9 km/l — 7.7 km/l in the city or 11.1 km/l on the highway.

Choose BE FORWARD to Purchase Your Next Used Toyota Camry

Considering all that Toyota Camry offers, it is easy to see why, especially since 1997, it has been one of the world’s most popular mid-size sedans. It is not hard to imagine that Toyota Camry will continue being just as popular for the next generation.