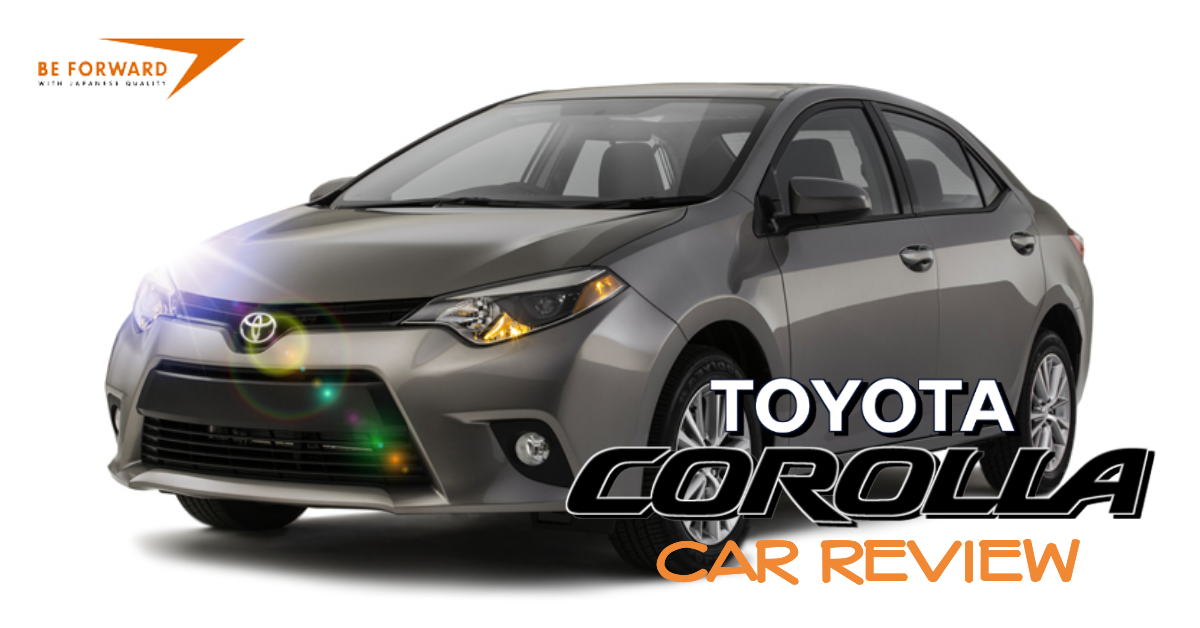 By the mid-1960s, countries around the world were beginning to settle back into peace and adding a little comfort and convenience to their lives. Car ownership was soaring. Eiji Toyoda and Toyota Motors introduced the Toyota Corolla in 1966, in the midst of a very receptive period of car ownership in Japan. In Latin, corolla loosely translates to ”small crown,” or ”crown of flowers.” It symbolized the hope that the Corolla would blossom in the hearts of buyers. It lived up to its name, meeting many of the needs of Japanese families at the time, namely a desire for fuel economy, plentiful seating, compact size, and dependability. It quickly became the best selling car in Japan, and by 1974 grew to become the best selling car worldwide. Even today it remains in the top five. By July 2013, Toyota sold more than 40 million Corollas with sales showing no signs of slowing in the near future. 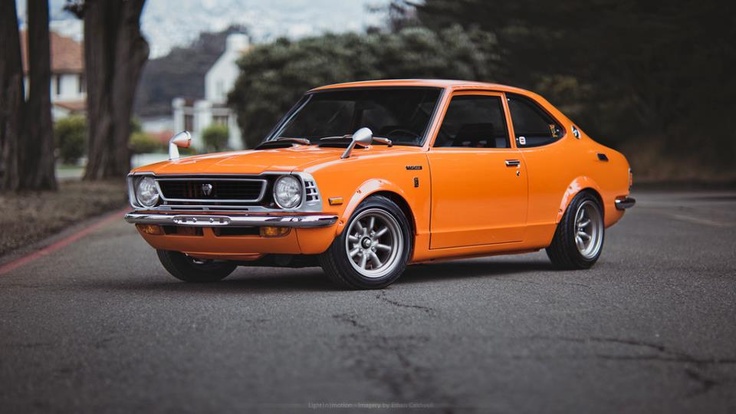 So how has Toyota managed to keep the world interested in the Corolla for more than 40 years when other models have gone stagnant or disappeared? Keep reading to find out about the changes Toyota made over all eleven Toyota Corolla generations.

The E 10 generation cars were introduced at the same time as the Datsun 1000 and the Subaru 1000. Both cars featured a sub-1,000 cc engine to offer tax breaks, as the Corolla was intended to do—but in a stroke of marketing genius, team Toyota decided to power the new Corolla with a 1,077 cc petrol I4 offering 60 bhp. Toyota used a ”100 cc Advantage” marketing campaign to quickly grow sales. The base gearbox was a four-speed manual, but a two-speed automatic was also available. The wheelbase was just 2,286 mm with an overall length of 3,848 mm, allowing the Corolla to fit into the subcompact class. The early Corolla was a unibody structure with a strut front suspension and a pair of leaf springs in the rear, a minimalist design that left very few parts to break.

Early on, Toyota dedicated itself to a pattern of facelifting the Corolla every two years and introducing a new generation every four. For the second generation of the Toyota Corolla a twin carb version of the 1,077 cc engine was introduced that boosted power to 73 bhp and the wheelbase was stretched to 2,334 mm. The addition of 48 mm doesn’t sound like much, but it gave a great deal of added legroom for rear seat passengers. They upgraded the engine to a 1,588 cc I4 in 1971 that was capable of 102 bhp. For the second generation, gearbox options included a five-speed manual and a three-speed automatic in all markets.

The third generation base Corolla was the E 30, but the E 40, E 50, and E 60 designations were added to include the various body styles that included a new three-door hatchback called the Liftback. The engine and gearbox options of the previous generation were carried over. Significantly, Toyota introduced its TTC system in 1975. The system used three different methods to lower emissions. In most markets, Toyota added one of the world’s first catalytic converters. Other major changes were the stretching of the Corolla’s wheelbase, overall length, and width dimensions and the addition of standard retracting front seat belts.

By the fourth generation, the Toyota Corolla line-up had become everything to everyone. The Corolla badge was attached to everything from a two-door sedan to a five-door van, called the Corolla Fielder, and sales were booming. By 1980, daily production hit an all-time high of 2,436 units and Toyota sold 1 million Corollas by February 1983. Several mechanical upgrades were made during the fourth generation. These included a new coil spring five-link rear end for improved ride quality, a longer wheelbase of 2,400 mm, an added fuel injection option on top trim levels, an optional four-speed automatic gearbox, and the introduction of power steering to the entire line.

Toyota focused more on fuel economy for fifth generation vehicles. To that end, fuel injection was made available across the entire line as an option. The fifth generation cars were the first to have a standard front-wheel drive layout; adding to the fuel economy and safety of the Corolla. Toyota also added the first diesel engine to the Corolla line-up. The 1,583 cc diesel I4 offered just 74 bhp, but was able to muster 124 N-m of torque. The fifth generation of the Corolla was, by far, the most popular, selling 3.3 million units over its four year production run.

The E 90 generation of the Toyota Corolla did not introduce a single mechanical upgrade over the previous generation’s cars. Under the bonnet, the only upgrade came in the visage of the GT-I and MR-2 versions of the Corolla. These variants were powered by a supercharged 4A-GZE capable of 165 bhp and 210 N-m of torque. Toyota also brought the 4WD All-Trac system over from the Tercel line as an option.

For the 1991 model year, the Toyota Corolla was stretched to have a wheelbase of 2,645 mm, placing it into the compact class where it remains today. To create a more solid stance, the width of the Corolla was increased to 1,684 mm. The added space between wheels and doors allowed for a more comfortable ride and a safer car. Safety features were the seventh generation’s main focus. ABS became available as an option across the line. Height-adjustable seat belts along with front airbags and side impact airbags also became standard. In a nod to the environment, Toyota began using CFC-free refrigerant in its vehicles.

The eighth generation Toyota Corolla was the first to use an aluminum block and aluminum cylinder heads in its smaller displacement engines, making them lighter and more fuel efficient than ever. These engines also featured laser etched valve guides. This switch eliminated the oil burning and valve guide failure found in previous generations. By the end of the generation, the base power plant was equipped with VVT-i valve timing for increased fuel economy, which gained the Corolla a low emissions rating for the first time. Toyota improved the Corolla’s ride with the addition of a front sway bar to all models. During the 1997 model year, the Toyota Corolla became the best selling car of all-time, knocking the Volkswagen Beetle off its high horse.

The ninth generation was mainly a cosmetic upgrade over the eighth and marked a deviation from the four-year generational cycle. Toyota did add a six-speed manual and a five-speed MultiMode manual gearbox to the line-up. The aluminum block/cylinder head combination became the standard for all global markets during the E 120 generation. The most common engine across the Corolla line was a 1,796 cc I4 capable of 130 bhp and fuel economy that led the compact car classification.

For the tenth generation, the Toyota Corolla was sold in two platforms. The first, sold in Japan only, featured a narrow stance and is still marketed as the Corolla Axio. The second, an international car, was wider. The two models were developed to allow the Corolla to meet Japanese governmental regulations while continuing to appeal to an international audience. Niceties like parking assist, a rearview camera, a navigation system, stability control, a crash detection system, and radar-assisted cruise control all make the Toyota Corolla safer than ever.

The eleventh generation is another iteration of the Toyota Corolla that represents more of an aesthetic upgrade than mechanical. The performance of the petrol and diesel engines improved, with the top powerplant now capable of 146 bhp and 187 N-m of torque. The gearbox selections now include five and six-speed manuals, a four-speed automatic, as well as seven and eight-speed CVTs. The newest Corolla features underbody and floor pan bracing and the incorporation of high-strength steel for added rigidity and occupant safety. The Toyota Corolla’s drag coefficient has been reduced to 0.28, nearly the lowest within the compact sedan group. All of these changes combine to make the Toyota Corolla one of the more fuel efficient cars in its class.

After eleven generations, the Toyota Corolla is still the best selling line of cars in the world. For more than forty years, Toyota has stayed the course by making all Corolla models economic ”every man’s” cars as they were originally intended to be. With every automaker in the world chasing it, only time will tell if the Corolla holds onto its number one status into a twelfth generation.