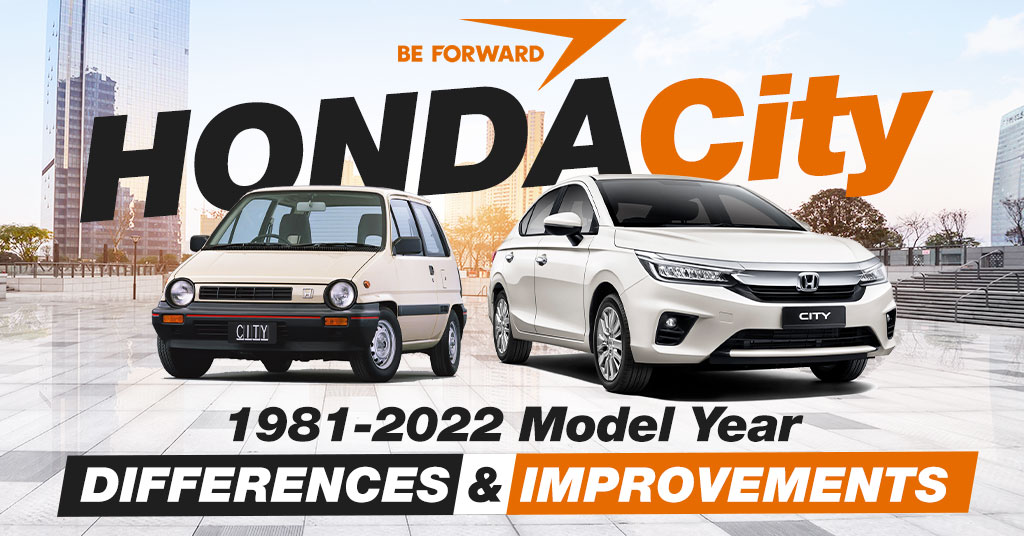 Honda City is a subcompact car manufactured by the Japanese automotive company Honda. The City was unveiled in 1981. It was originally a two-door convertible or three-door hatchback until its production came to a halt in 1994. In 1996 the City resumed production, but this time as a subcompact four-door sedan, and remained so until the 2019 model which included a four-door sedan and five-door hatchback.

The City, as its name implies, is a city car. Let’s briefly take a look at the history of Honda City in order to learn a thing or two about this beautiful car from Honda. Please read on.

The first-generation Honda City was introduced as a three-door hatchback in 1981. It was also available as a two-door convertible and a two-seater van mostly sold in Australia. The City’s styling featured the innovative”Tallboy” design which created enough interior space to comfortably accommodate four adults. As a 3-door hatchback, the City was available in a variety of trim levels.

In 1982, Honda introduced a Pininfarina-designed drop-top convertible featuring big bumpers similar to those on the Turbo II “Bulldog” and wider fenders. Other notable versions were the “Pro-series” with either two or four seats and the high-roof “R Manhattan Roof” with a taller roof.

Under the hood, the Honda City came fitted with a 1.2-liter (ER) 4-cylinder petrol engine with 67 hp as standard, while optionally you could go with the turbocharged version of this engine with 108 hp and 118 lb-ft of torque. These engines were mated with either a 3-speed automatic, 4- or 5-speed manual, or 4+3-speed Hypershift manual transmission.

The second-generation Honda City was introduced in 1986. It was completely redesigned featuring a low and wide styling that made the car lighter and improved the car’s driving performance. This styling was shared with the first-generation Honda Civic. This model was only available as a 3-door hatchback, with the production of the convertible and turbo models from the previous generation overlapping with this generation for a little while.

After this generation, the “City” name was retired with the Honda Logo and Honda Capa taking its place.

The “City” name was retired in 1994, only to be revived in 1996 by introducing the third-generation Honda City. Unlike the previous City models which were subcompact 3-door hatchbacks or 2-door convertibles, this new City was a 4-door sedan. The City was slotted in below the Honda Civic, although they shared a similar EF Civic platform. The SX8 City was available in a base LXi and premium EXi trim.

In 2000, the City received a mid-cycle facelift named “Type Z” in select markets. This facelift introduced new headlights, taillights, and suspension systems for better handling, and a one-piece bumper in place of the previous three-piece bumpers.

The fourth-generation Honda City (also known as Honda Fit Aria in Japan) was introduced in 2002. This model was derived from the Honda Jazz/Fit hatchback, it was more rounded with a flowing style.

Inside, the Honda City packs a fantastic interior into a small footprint. Three-round pods house the easy-to-read instrument cluster, while the center console houses the car stereo, three rotary air conditioning controls, and cup holders below.

The front seats are placed high with some firm cushioning and plenty of legroom and headroom, while the rear seats offer limited space and are best suited for two instead of three adults. But for such a small car, legroom and headroom cant get no better.

Storage options are vast, from the large glovebox to a long shelf under the dashboard, two cup holders just ahead of the transfer shift, door pockets, and a storage bin between the front seats. Rear passengers only get front seat jacket pockets.

In 2005, the fourth generation City received a midlife facelift, with this facelifted model named the City ZX. Exterior changes included the extension of the front end and rear end by 2.6-inches and 0.6-inches respectively. Other changes included a redesigned front grille, new headlights, taillights, fog lights,  and front and rear bumpers. On the sides, the City came fitted with automatic side mirrors and 15-inch alloy wheels as standard throughout.

The fourth-generation Honda City was introduced in 2008. Like the previous model, this 2008 City is based on the Honda Jazz/Fit hatchback platform, but its overall design consists of a longer wheelbase compared to the hatchback, swaged sweeping lines on the sides, a wedgy rear, a lower roof, and long front overhang, that give the City a classic sedan profile compared to its predecessor.

The 2008 City is a five-seat car, but for comfort four adults will be fine with the car offering generous levels of leg- and headroom on the rear seat. The cargo area is 400 liters.

Safety features found on this City model include vehicle stability assist, a rear-view camera, and front, side, and curtain airbags.

The sixth-generation Honda City was introduced in 2014. It was built around Honda’s “Exciting H Design!!!” profile unveiled in 2013 with the !!! marks standing for High Tech, High Touch, and High Tension.

The “Exciting H Design!!!” also brought a new “Solid Wing Face”  front styling with an “H” Honda logo located at the center of the front grille, with the grille stretching from one headlight to the other in an advanced uninterrupted flow.

The 2014 City’s length has grown by 1.8-inches and wheelbase by 2.0-inches which allowed the front and rear wheels to be pushed apart to create that much-needed extra cabin space, especially rear-seat legroom. In trying to maximize interior space, interior comfort was sacrificed, with the City’s front and rear seats becoming firm, thin, and flat. A six-foot-tall passenger will struggle for headroom at the rear. The cargo area is now 537 liters, which can be extended by split-folding the 60:40 rear seats.

The 2014 City comes fitted with an infotainment system with a 7.0-inch color touchscreen display. Other features of the system include Bluetooth connectivity, four power outlets, eight speakers, a rear-view camera, and phone ‘mirroring’.

In 2017, the sixth-generation City underwent a mid-life facelift. Changes include a revised chrome bar grille, the introduction of LED headlights with daytime running lights, and LED taillights.

Under the hood, this City model carried over some of the engines from the previous model with its base engine being the 1.5-liter (L15A) i-VTEC with 118 hp. Later a hybrid system that combines a 1.5-liter (LEB) SOHC i-VTEC petrol engine with 108 hp and Honda H1 Electric Motor Sport Hybrid i-DCD with 29 hp, producing a combined output of 130 hp and 131 lb-ft. These engines are mated with either a 5-speed manual, 6-speed manual, 7-speed dual-clutch, or CVT transmission.

According to Honda, the hatchback has better legroom than the sedan and it also comes with the rear Ultra Seats, which can be configured in four (utility, long, tall and refresh) modes.

The exterior of the 2020 City is edgy and sharper. The front looks splendid with features such as a thick chrome strip that stretches from one LED reflector headlight with DRLs to the other. At the rear, a shark fin antenna at the top rear end, and LED combination taillights.

Inside, the 2020 City feels and looks more premium than before. The dashboard styling is nice, neat, and simple with wood inserts, chrome outlines, rear A/C vents, and a touch of leather here and there. The driver is treated with a height-adjustable seat and a multifunctional steering wheel. Other features include cruise control, an 8.0-inch touchscreen multimedia system with Apple CarPlay and Android Auto compatibility.

Under the hood, the 2020 City comes fitted with the same 1.5-liter i-VTEC engine used on the previous model with reduced friction, better airflow, and a bit lighter. This engine is paired with a 6-speed manual or CVT transmission.

The production of the Honda City spans 40 years. Not many cars have attained this milestone, and the few that have attained it, it’s due to their positive reputation on the market.

The City is a quiet, refined, feature-rich, and good-quality car that is easy to drive with a strong street presence as well. We conclude by saying, you can’t go wrong by buying the City. And if that is the case, look no further, visit BE FORWARD, and check out our list of used Honda City on sale.