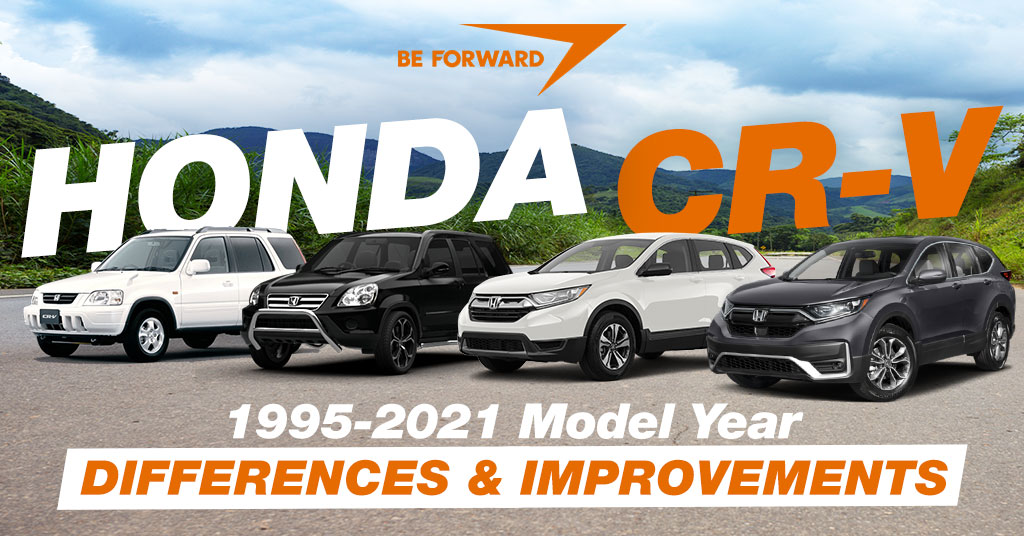 The Honda CR-V is a compact crossover SUV manufactured and marketed by the Japanese company Honda.

The CR-V was built for recreational purposes and this led to its initials being twisted by enthusiasts as “Comfortable Recreational Vehicle” instead of  “Comfortable Runabout Vehicle”. It’s a car known for its good gas mileage, comfortable ride, and energetic acceleration.

The CR-V was introduced in 1995, it’s currently on its fifth generation from 2016. Let’s take a brief look at how it has evolved over the years.

The first generation CR-V (RD1) was unveiled in October 1995. The RD1 CR-V is built on the same platform as the sixth generation Honda Civic.

From the outside, The CR-V (RD1) was designed with similar features resembling those found in station wagons. Its headlights were similar to the sixth generation European version Civic but a bit scaled-up, and between the headlights, it was fitted with a V-shaped grille with a Honda emblem in between, and beneath them was a black plastic bumper. From the sides, the CR-V looked like a mixture of a minivan and a station wagon, with higher ground clearance.

The CR-V was facelifted in 1999 with major exterior changes being a new front bumper, an altered rear bumper, and a new engine.

The interior of the CR-V is spacious featuring a flat floor due to the absence of a transmission channel. Models with an automatic transmission were designed with a free from side to side passage on the front row. At the rear, there was plenty of room enough to accommodate three passengers comfortably with enough head-, shoulder-, and legroom. The CR-V was designed for recreational purposes, as a result, Honda designed it in a way that its front seats can be tilted back and the rear bench seat folded, transforming the interior into a wide, and almost flat bed while the cars trunk floor can be folded to create a picnic table.

With this release, unlike the previous, the RD4 CR-V is available in two trims which are the LX and EX. The LX like in the previous models is the standard trim with features such as air conditioning, power locks, power windows, rear-seat heater ducts, rear and side-impact front airbags, and a CD player while the EX is the high-end trim with extra features such as a sunroof, upgraded audio system, a power moonroof, keyless remote, and antilock brakes. Some of the new features in this model include a folding center tray between the front seats, reclining rear seats, and front and rear side airbags.

This second-generation CR-V’s cabin is more spacious compared to the first, it offers excellent legroom and headroom for both front and rear passengers.

The old engine was a bit overwhelmed, so Honda replaced it in this model with a 2.4-liter (K24A1) 4-cylinder engine with 160 hp and 162 lb-ft of torque. This engine is mated with either a 4-speed automatic or 5-speed manual transmission.

In 2005 the RD4 CR-V was facelifted with major changes being a changed grille with two horizontal bars instead of one, a slightly changed bumper with round fog lights, new head- and taillights with clear in place of amber rear turning light lens and two separate lights for high and low beams, replacing 15-inch wheels with 16-inch wheels. There were minor interior changes which include steering mounted audio controls and redesigned rear headrests.

In 2006 Honda released the third generation CR-V (RE1) as a 2007 model. This model was redesigned with a slightly smooth design and reduced ground clearance for ease of embarking and disembarking.

The 2006 CR-V is available in three trims which are the LX, EX, and EX-L. The base model LX comes with standard features such as air-conditioning, a folding center tray, power windows, power mirrors, and 17-inch wheels, the EX added a better audio system, rear cargo shelf, a moon roof, and alloy wheels, while the top range EX-L featured CD player with a six-disc changer, a DVD player, Audio USB input, Bluetooth capabilities, leather seats, a PC card reader, a rear-view camera, navigation system with voice-activation technology, and a rear subwoofer.

This CR-V model was offered with a 2.4-liter (K24A) inline-4 petrol engine with 166 hp. This engine is mated with a 5-speed automatic transmission, with the option of an all-wheel-drive (AWD) or front-wheel-drive (FWD) drivetrain.

In 2010 the CR-V received a facelift with changes in powertrain, equipment, and styling.

Exterior changes include a redesigned front fascia featuring a chrome grille with horizontal slats above, a honeycomb-designed lower grille below, and a new front bumper, while at the rear it featured a redesigned bumper and revised taillights. The EX and EX-L trims came with new five split-spoke 17-inch alloy wheels.

The fourth-generation CR-V (RM1) was released in 2011. The car continued to evolve but there was no significant change in dimensions, but styling change.

This generation CR-V comes fitted with the previously used 2.4-liter (K24A) inline-4 petrol engine but with improved power of 186 hp and 163 lb-ft of torque. There is also an optional 2.0-liter (R20A) inline-4 petrol engine with 155 hp and 140 lb-ft. These engines were mated with either a 5-speed automatic or CVT transmission. FWD remained the standard drivetrain with AWD as an option.

In 2015 this generation CR-V received a facelift with most of the exterior changes done on the front fascia which include the introduction of LED daytime running lights, redesigned halogen headlights that extend to the quarter panels, a new solid-looking grille, slightly changed foglight surroundings, and a new skid plate. A new configurable center console that added more functionality, a 7-inch touchscreen display, a new rear console with air vents, a 10-way power-adjustable driver’s seat, heated front seats, smart entry with push-start button, lane watch, and more.

The fifth and current generation Honda CR-V (RW1) was released in 2016. This release is inches taller and has a longer wheelbase compared to the previous release. It features sophisticated and bold styling, with its front fascia fitted with Samurai eyes like headlights. Other notable exterior features include LED head- and taillights, dual exhaust pipes, and short and hood overhangs.

The interior of the RW1 CR-V is spacious, with enough room for everybody. Inside, the cabin looks fresh with the lowly mounted dashboard covered with better and finely grained plastics, and an instrument cluster that is easy to read. The 7.0-inch touchscreen infotainment unit is standard in all but the base model, with climate and audio controls, placed just below it.

In 2020 the CR-V was facelifted, apart from the cosmetic changes, Honda also introduced a hybrid version of the CR-V and the long-standing 2.4-liter petrol engine was no longer part of the CR-V powertrain.

Other significant changes include the Honda Sensing active safety system with features such as adaptive cruise control and the latest crash mitigation and prevention technologies becoming standard, side skirts with chrome finishing, a front fascia with a new upper grille, LED fog lamps as standard except on the base LX trim, a rear bumper with chrome inserts, new 18-inch alloy wheels for EX/EX-L trims and 19-inch alloy wheels on top-line Touring model.

The CR-V Hybrid comes fitted with a 2.0-liter (LFB-13) inline-4 petrol engine with Honda’s i-MMD hybrid system. This system is mated with an E-CVT transmission.

The Honda CR-V was introduced in 1995 as a 1996 model, and since then the CR-V has been a popular and preferred choice in the compact SUV category. The CR-V has maintained a combination of spacious cabins, intelligent design, easy access, excellent reliability, efficient fuel economy, and car-like handling and maneuverability, as its selling point to a wide range of buyers such as families and empty-nesters.

With these features, the CR-V has maintained a good resale value and is a great buy as a used car.

Please visit BE FORWARD and check out our list of 100+ used Honda CR-V’s on sale.