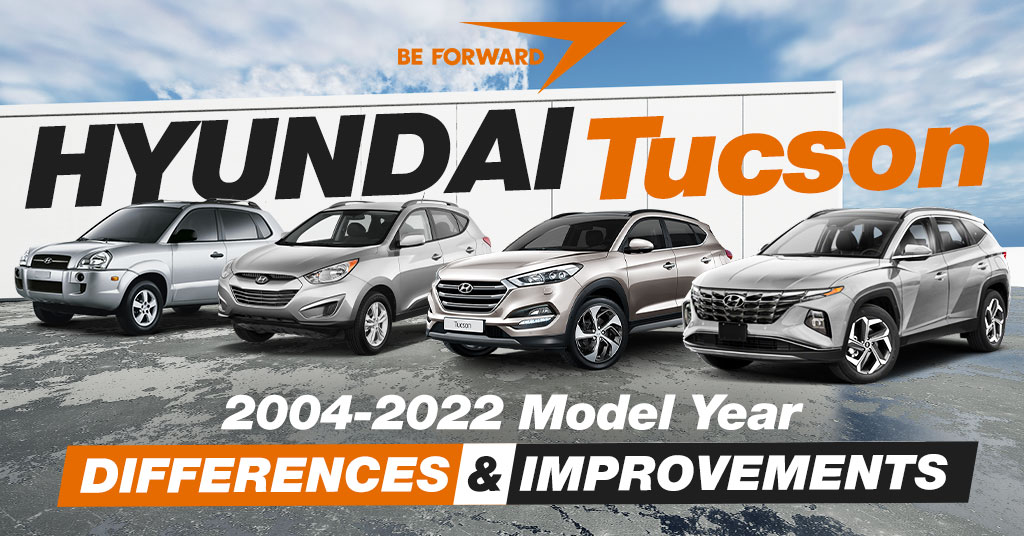 Hyundai Motors, the world’s fifth largest auto manufacturer, introduced the Hyundai Tucson in 2004 to compete against other popular SUVs like the Ford Escape, Honda CR-V, and Toyota RAV4. It has a masculine appearance created by wraparound headlights, LED center brake light, and the Hyundai Logo held by a single-bar grille, the Tucson is a great family car — safety is the Tucson’s hallmark, as it boasts a 5-star rating awarded by the U.S. National Highway Traffic Safety Administration in 2009.

Find out which model years to pay attention to as BE FORWARD breaks down key years 2004 to the present in this comprehensive review!

In 2004, the Hyundai Tucson first generation was launched. The 2004 -2005 Hyundai Tucson model comes fitted with 3 engine options which are the 2.0L Beta II I4, 2.7L Delta V6 petrol engines, and the 2.0L CRDi I4 diesel. These engines are linked to a 5-speed manual, 6-speed manual, or 4-speed automatic transmission.

The SE trim has extra features such as a different alloy design, added to the roster with contrasting gray body cladding, an AM/FM/Cassette/CD as well as a front windshield wiper de-icing grid and fog lights.

The Limited trim added an extra 6-disc in-dash CD changer, leather seating surfaces, body-colored cladding, heated seats, and automatic climate control. The 2.7L V6 engine was only available on the SE and Limited trims. The 2.0L 4-cylinder came only on the GLS.

The Tucson has modest boot space but when more space is needed it’s easy-to-fold seats to expand this volume. The front passenger seats can even fold flat for extra-long cargo.

The 2004 – 2005 Tucsons come fitted with safety features such as dual-stage frontal impact airbags, torso side-impact airbags built into the front seats, and curtain airbags for side-impact protection for front and rear passengers.

The second-generation Tucson started its production from 2009 to 2015, and from here the changes were minimal. In this generation, the Hyundai added different engines which were not available in the first generation and make the 2nd generation have 6 engine options which are the 1.6L Gamma GDI I4, 2.0L Nu GDi I4, 2.0L Theta II MPi I4, 2.4L Theta II MPi I4 petrol engines, 1.7L U II CRDi I4, and 2.0L R II CRDi I4 diesel engines. These engines transfer power to the wheels via a 5-speed manual, 6-speed manual, or 6-speed automatic

The LX trims were named the Limited and got color-coded cladding, a high-performance sound system, and automatic climate control. The GLS trims also have cloth seats with the option of a heating element. The alloy wheels in both GLS and Limited trims got redesigned. There are no changes in the base GL.

The GLS and SE trims were respectively renamed from the GL and GLS to match the standard for all new Hyundai vehicles. The SE trim is a 6-cylinder engine and comes with a sport utility rack, and has 4WD. The 2009 model received minor trim changes and restyling.

The GL trim is equipped with a new 2.0L 4-cylinder engine linked to a 5-speed manual or an available 6-speed automatic transmission in order to obtain better fuel consumption than the 2.4L engine. The 2011 GLS trim includes the Popular Equipment Package and an automatic transmission as standard equipment. Limited models have received Sachs dampeners to provide a smoother ride and include standard electro-chromatic mirrors with Homelink. The motor-driven power steering and electronic stability control systems have been enhanced for improved performance. All AWD models are now powered by standard heated seats.

The 2014 model has been upgraded with GDI direct-injected Theta II engines that have better emissions and obtain more power, more stylish alloy rim designs, a few minor improvements to the interior/audio system, and LED tail/headlights.

The 3rd generation Tucson started its production from 2015 to 2019 and measures 65 mm longer and 30 mm wider than its successor while riding on a 30 mm longer wheelbase. Back cargo storage space grew from 465 to 513 liters.

In this generation safety technologies such as auto-braking for pedestrians and cars, along with a dual-clutch automatic transmission and torque vectoring known as Hyundai Active Cornering Control, lane departure warning, and blind-spot detection are offered.

The Tucson for the 2019 model year received significant changes and a facelift to the powertrain options which were first shown at the 2018 New York Auto show. The exterior updates included reshaped hood and tailgate design, a new cascade grille, a rectangular fuel door, an updated LED headlight design for higher trim levels, and new rim designs. The interior received major changes to include a high-mounted head unit display and a newly designed dash with lower centrally-placed air vents.

The 6-speed Shiftronic automatic used in the previous model replaced the manual and dual-clutch transmission. The 2.0L Nu GDi engine continues in the SE and Value trim levels but for other trims, the 1.6L I4 turbocharged engine was left and replaced by a 2.4L I4 GDi naturally aspirated engine which generates 181 hp at 6,000 rpm and 237 Nm with a slight loss in fuel economy.

For the Chinese market, Tucson received an alternate facelift for the 2019 model year with the single model name known as 280TGDi and 6 separate trim levels. The 1.6L G4FJ engine is available mated to a 7-speed dual-clutch transmission.

Hyundai also unveiled 2 concept models during the Geneva Motor Show, a diesel-powered plug-in hybrid and a Tucson hybrid electric. The 48V Hybrid is attached with a 2.0L diesel model with 134 hp and a 6-speed manual transmission along with a 14 hp electric motor; combined system performance is 148 hp and 413 Nm of torque.

The concept plug-in-hybrid is powered by a 1.7L diesel engine and a 7-speed dual-clutch transmission and is also based on the all-new Tucson platform. The engine produces 113 hp and is attached by a 67 hp electric motor and a 10.7 kWh lithium-ion polymer battery, which delivers an all-electric range of more than 50 km. The combined system output is a maximum of 180 hp with 474 Nm of torque, with estimated CO2 emissions of less than 48 g/km. Most of the 3rd generation Tucson offers an average fuel economy of 9.8 – 12.3 km/l.

The 4th generation Tucson is offered with 2 wheelbase lengths for different markets to meet different customers’ expectations and needs in different regions, which are short-wheelbase (2,680 mm), and long-wheelbase (2,755 mm).

According to EPA-estimation, most of the 4th generation Tucson has a fuel economy rating of 11.05 Km/L in the city and 14.03 Km/L on the highway with regular gas FWD models with a standard 54 liters fuel tank capacity.

Find out if the Hyundai Tucson is really the right car for you by comparing it with other Hyundai SUVs and its competitors. BE FORWARD is sure to help you get into the right car. Check out similar comparisons and list articles below!