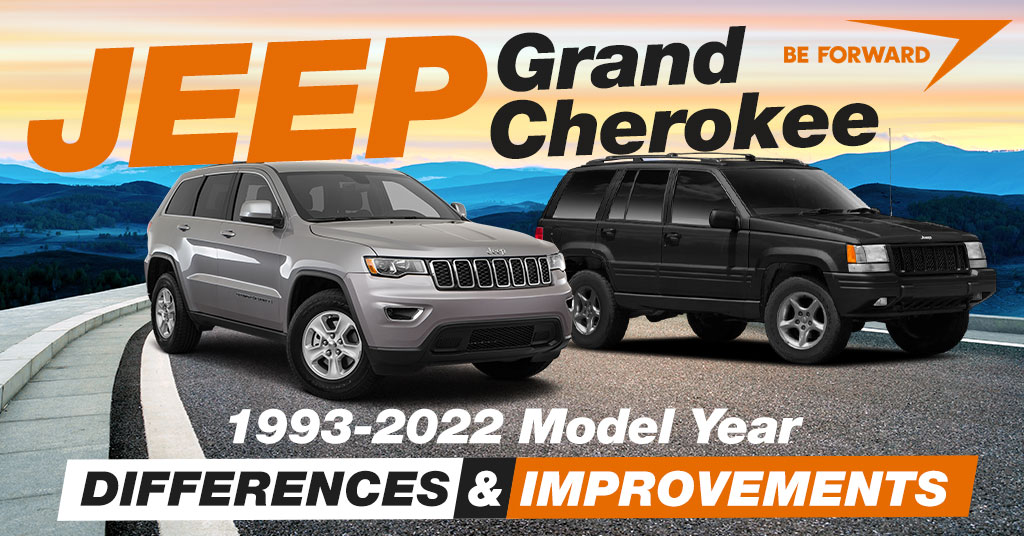 Let’s take a look at the history of the Jeep Grand Cherokee in brief as it is about to mark 30 years since it was introduced, so as to see how it has evolved, both inside and out. Please follow through.

The first generation (ZJ) of the Jeep Grand Cherokee was unveiled in 1992 for the 1993 model year. The “ZJ” Grand Cherokee was available in three trim levels which are the Base SE, Laredo, and Limited, with the Orvis and TSI trims introduced in 1995 and 1997 respectively.

The timing of the introduction of the first Jeep Grand Cherokee was almost perfect as the early 1990s were SUV times, as most families needed one for hauling everyone to and from school/work, maneuver patiently in urban areas, and nicely take a family on a vacation across the country. The Grand Cherokee was the car for that, and so much more.

The Grand Cherokee provided a playful balance of “utility” and “sport” combined with a family-friendly grille and fascia.

The ZJ Grand Cherokee came fitted with a standard 4.0-liter V6 engine with 190 hp. Later, Jeep introduced the 5.2-liter V8 engine and the 5.9-liter V8 petrol engine with 240 hp. The Grand Cherokee is available with two-wheel drive or four-wheel drive options. The engines were paired with either a five-speed manual or four-speed automatic transmissions.

The second-generation (WJ/WG) Grand Cherokee was unveiled in 1998 for the 1999 model year. This model shared only 127 parts with the outgoing model which makes it a rather completely new car.

Its exterior looks were a rounded version of the original’s styling but it clearly remained a Jeep. Its face featured the iconic seven-slat grille flanked by rectangular headlights with rounded edges. The bumper was placed high up to improve its approach angle. On the sides,  its flared wheel arches gave the car some real off-road impression.

Inside, the cabin is spacious, the seats are comfortable and supportive covered in velour upholstery as standard, and leather-clad as an option. The dash is nice and neat with a center console that is fitted with an audio system at the top followed by two vents and climate control buttons beneath it. The instrument cluster features a large round speedometer and tachometer flanked by other small round gauges. Between the front seats, you find the gear-selector, transfer case lever, two cup holders, and a covered deep bin that doubles as a hand rest.

The third-generation (WK) Grand Cherokee was introduced in 2004 for the 2005 model year. This model came with a much longer wheelbase and body that improved interior space. Initially, the 2005 Grand Cherokee was available in Laredo and Limited trims only.

The exterior of the 2005 Grand Cherokee had new looks but the seven vertical slats on the grille were retained. The grille was flanked by newly designed round headlights that replaced the classic, rectangular ones. The fender flares on the front and rear wheel arches and the pushed forward D pillar enhanced the car’s sportier looks.

Inside, the cabin has benefitted from the growth in wheelbase and size making the car more spacious. The interior is lavishly finished like before. The standard features include cloth upholstery, a rear-seat DVD system, and Bluetooth connectivity. The higher trims add a touchscreen infotainment system and leather upholstery.

Under the hood, the 2005 Grand Cherokee came fitted with a 3.7-liter petrol engine with 215 hp as standard and a 4.7- or 5.7-liter Hemi V8 petrol engine as options. In the European market, there was a 3.0-liter V6 diesel engine also available. These engines were paired with a standard 5-speed automatic transmission.

In 2006 a performance-oriented Grand Cherokee SRT8 Jeep was introduced. It was fitted with a 6.1-liter HEMI engine with 420 hp. This model accelerated from 0 – 100 kph in well under 5 seconds.

The fourth-generation (WK2) Grand Cherokee was introduced in 2010 for the 2011 model year. Unlike previous models, this 2011 model features four-wheel independent suspension which improved its on-road dynamics. It’s available in Laredo, Limited and Overland trims.

There was plenty to like on the exterior of the 2011 Grand Cherokee. It’s a massive and attractively styled SUV.

The iconic seven-slot grille sits high on the front, flanked by the slim bi-xenon headlights. The reduced wheel fender flares are just right. From a three-quarter view from the rear, its taillights resemble those of the BMW X5 or VW Toureg.

In 2014, all models in the JGC lineup were upgraded with new features such as a new shorter grille, slimmer taillights, and new LED rear lamps that imitate the shape of the headlights. Safety-wise a new feature introduced was forward-collision warnings with automatic emergency braking, and entertainment-wise, the was fitted with a new 19-speaker, 825-watt Harman/Kardon surround-sound audio system.

Inside, the 2011 Grand Cherokee features a neat dashboard design, a chunky three-spoke steering wheel, and a well-arranged center console adorned in inoffensive metallic-plastic finishing. Some trims come with real wood finishing on the steering wheel, dash, and doors. The driver and front passenger compartments are well sculpted and appealing, with the radio and climate control buttons easy to access and operate. The rear seats of this 2011 JGC are much wider with better bottom cushioning, and knee room increased by 4-inches. The cargo area is big enough but can be extended by folding flat the rear seats to get a maximum of 1926 liters of cargo space.

Under the hood, the 2011 JGC came fitted with a new, more powerful, and efficient 3.6-liter V6 petrol with 290 hp as standard. The 5.7-liter Hemi V8 petrol with 360 hp and the 3.0-liter V6 turbo diesel with 295 hp were available as options. The top-of-the-range SRT came fitted with a 6.4-liter Hemi V8 petrol with 465 hp. Initially, these engines were paired with a five-speed automatic transmission, which was later joined by a six-speed and eventually an eight-speed self-shifter transmission.

The 2011 JGC came fitted with Quadra-Lift air suspension which complements the Quadra-Trac I, Quadra-Trac II, and Quadra-Drive II four-wheel-drive systems.

The fifth-generation (WL) Grand Cherokee was unveiled in January 2021 for the 2021 model year. With this release, Jeep introduced a three-row long-wheelbase (LWB), Grand Cherokee L. It is available in Laredo, Limited, Overland, and Summit trims.

The Grand Cherokee L has a wheelbase that is 7.0-inches longer than the outgoing WK2 model.

This 2021 JGC is still a Jeep that needs no introduction. Its face features a long hood, a wider seven-slot grille flanked by new slimmer LED headlights, and a fat bumper beneath. On the sides, the trapezoidal wheel arches distinguish it from the outgoing model. Its low-lying roofline gives the car a sleek appearance.

The cabin is full of luxury and comfort, it features a wing-shaped dashboard with a standard 8.4-inch infotainment touchscreen (10.1-inch optional) with Uconnect 5 multimedia system and a 10.3-inch digital programmable instrument cluster with piano black surround.

The JGC L has plenty of space for people and cargo. Its second-row seat has a back and forth sliding function that simplifies passage to the third row and allows legroom adjustment. The third row is usable and the cargo room is enough.

The WL JGC L is available as a rear-wheel-drive-based as standard or in a choice of several optional four-wheel-drive systems. The Overland and Summit models are fitted with an air suspension with a raise or lower functionality that can improve ground clearance by 4.2-inches.

Under the hood, the WL JGC came fitted with a trio of powertrains which are a 3.6-liter V6 petrol engine with 290 hp as standard, and 5.7-liter V8 petrol with 357 hp as fitted on high-end models or a hybrid version which features a turbocharged 2.0-liter (4xe) four-cylinder petrol engine, two electric motors, and a 400-volt battery pack that has a combined output of 375 hp and 470 lb-ft of torque. These powertrains are paired with an eight-speed automatic transmission.

In September 2021 Jeep introduced the two-row five-seat fifth-generation model Grand Cherokee as a 2022 model. This model is 3.4 inches longer than the outgoing WK2 model. Apart from their size the Grand Cherokee shares common features with the grand Cherokee L.

The Jeep Grand Cherokee has been around since 1992, and its emergence was perfectly timed. The Grand Cherokee is an SUV that offers the off-road thrill of the classic Jeep, paired with the convenience of urban usability of a family vehicle, which renders it the best of both worlds.

It might cost a fortune to buy a brand new Grand Cherokee, but you can still get a good deal on a used one. Used Jeep Grand Cherokee models have a good resale value and can be had for just a fraction of the original retail price. Due to their build qualities, most of the used Grand Cherokees are in great shape and are guaranteed to offer many more years of off- and on-road use to their new owners.

We at BE FORWARD have a list of 600+ used Jeep Grand Cherokee for sale. Please check out our stock as you look forward to buying a JGC.