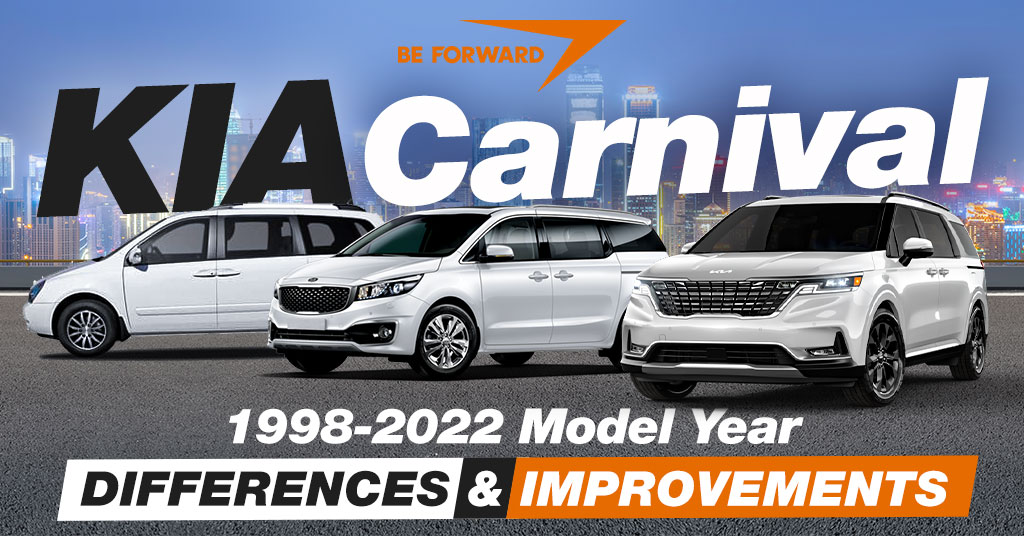 The Kia Carnival is a minivan manufactured by the South Korean automotive company Kia. The Kia Carnival also known as Kia Sedona was unveiled in 1998 and is still produced to date.

The Carnival is a true people mover (MPV), capable of accommodating eight passengers. Despite the emergence and transition that saw people preferring crossover SUVs and SUVs over other cars, the Kia Carnival has been able to maintain its market share remarkably.

Here we take a look at the transition that the Carnival has taken from its inception to the present. Please follow through.

In 1998 Kia unveiled the Kia Carnival/Sedona minivan. The styling of the front fascia featured a long hood that houses the grille with a hood scoop, a grille that matched with the vehicle’s color or in chrome, large rounded headlights, and a large bumper with fog lights on the sides and an air intake vent at the center. On its sides, the Carnival was fitted with front-hinged and rear sliding doors with body-colored/chrome opening handles, while at the rear, it had large taillights, a spoiler, a blindspot mirror, and roof rails at the top.

The interior is spacious, cloth upholstery is standard. The doors, door panels, and steering wheel featured nice wood trimming. A center console that houses the audio system, gear shift, and separates the front row of seats creating a personal space for either side.

The exterior of the 2006 Sedona is stylish and classy. The face is made up of a grille with horizontal openings with long black slots and two chrome strips with a Kia badge at the center. The grille is flanked by two big wedge-shaped headlights and a thick bumper with an air intake and tidy fog lights at the corners.

On the sides the presence of low lying body-color strips can easily be seen, a gash under each third window for the sliding rear doors, and 16 or 17-inch alloy wheels. At the rear, there’s a big rear window, a spoiler with a stoplight, and nicely shaped taillights.

Kia unveiled the third generation Kia Carnival/Sedona in 2014 for the 2015 model year.

The 2015 Carnival is more of a crossover-utility-vehicle (CUV) than an MPV. The face features a 3D ‘tiger nose’ grille,  headlights with angular looks,  LED parking lights, and fog lights that give the car a bold look. On the sides, the designer covered up the car’s length by raising its beltline over the rear wheels, and the two power-sliding doors provided ease of access to the middle and rear seats.

On the inside, the Carnival is so stylish and attractive, and the finishing is solid enough to withstand family use. It comes in a six or seven-seat configuration, with the six having a pair of captain seats on the mid-row. The third-row seat has a  60/40 split-folding functionality that creates a flat cargo floor and the middle row seats can be moved back and forth to adjust the cargo area. The Carnival has 1139-liters of cargo space.

Kia unveiled the fourth generation Carnival/Sedona in 2020 for the 2021 model year.

The 2021 Carnival/Sedona has SUV looks with its lower ground clearance and rear power sliding doors deeming it not. Its definite, two-box bodywork features a bonnet almost parallel to the ground, similar to most large SUVs. New design features of the Korean MPV include a raked forward C-pillar and very long rear sliding doors.

Inside, the three-row cabin can seat up to eight passengers. The middle seats from the second row have a slide and tilt mechanism for extra comfort, but it can also be completely removed to create an easier passage to the third row. The dash has wood, metallic, and leather trimming, and a pair of wide front seats that collectively give the car a premium look. Depending on the trim level, the Carnival/Sedona comes fitted with either an analog instrument cluster or a TFT display. The center console is fitted with a wide touch-screen infotainment system. The cargo area is 960-liters with all seats up, 2220-liters with the third-row seat folded, and 4021-liters with the second and third-row seats folded.

The 2021 Carnival comes fitted with a 3.5-liter V6 petrol engine or a turbocharged 2.2-liter four-cylinder diesel. These engines are paired with 8-speed automatic transmission in a front-wheel-drive setup.

The Kia Carnival is a true and great people mover with each upgrade it has kept on improving, but compared to its competition it attracts favorable price tags. For those who like traveling as a family then this car will be the ideal car for you as its interior is comfortable, and the car is reliable, efficient, and durable.

We at BE FORWARD have a stock of 200+ used Kia Carnivals listed for sale. Please visit our page to check out our stock for your next car.