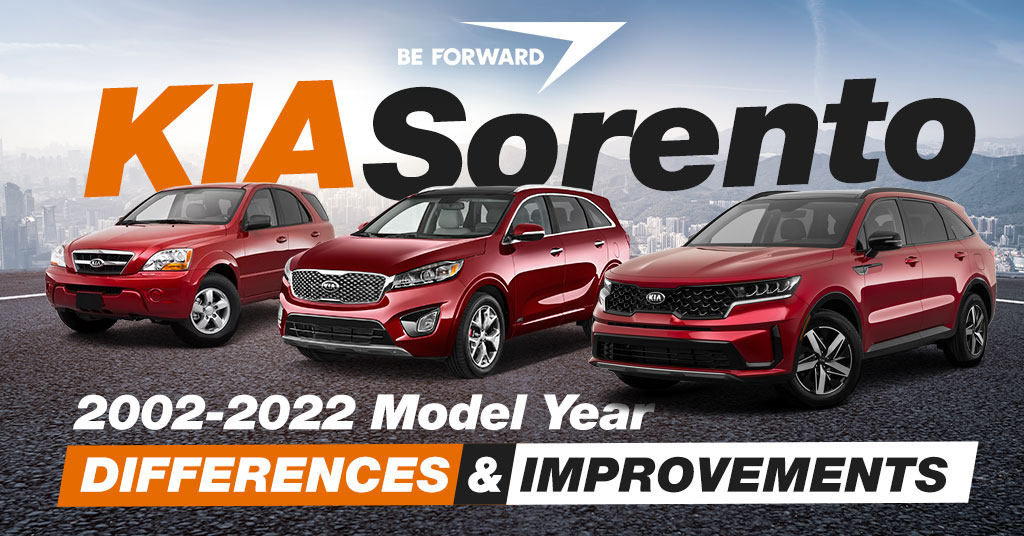 The Kia Sorento is a mid-size crossover SUV manufactured by the South Korean automotive company KIA. The Sorento was introduced in 2002, it started life as a traditional 5-seat SUV but has since evolved into a more modern three rows 7-seat, car-like crossover.

Let’s take a look at this offering from Kia and see how it has evolved throughout its generations. Please follow through.

The first-generation Kia Sorento was unveiled in 2002 for the 2003 model year. It had a body-on-frame structure that enhanced its towing and off-roading capabilities found in traditional SUVs but jeopardized its interior space, ride quality, and handling offered by other crossovers.

The second-generation Sorento was released in 2009 for the 2010 model year. This model shifted from a body-and-frame structure to a unibody platform. The 2010 Sorento was available in four trims, starting with the Base, LX, EX, and the premium SX.

The external appearance of the redesigned 2010 Sorento followed Kia’s new design language which made it more appealing than the outgoing model. Some of the exterior changes include the introduction of Kia‘s corporate Tiger Nose grille and twin round headlights.

Kia unveiled the third-generation Kia Sorento in 2014 for the 2015 model year. The 2015 Sorento was 189 inches longer, 0.2 inches wider and its ground clearance was reduced by 0.6 inches to improve handling.

Exterior styling also changed, its front end was a bit meaner, thanks to its larger headlights, bigger upright tiger-nose grille, and wide-opening vents. On the sides, the surfaces were slightly reshaped while at the rear a shark fin antenna is fitted at the top of the roof, a spoiler with a stoplight is placed at the top of the tailgate, slimmer wrap-around LED tail lights, and a new bumper fitted with a skid plate underneath.

Inside, the cabin is spacious, thanks to the growth in size. The seats were slightly realigned to create enough room for up to seven passengers and cargo.

The 2015 Sorento comes fitted with either a 3.3-liter Lambda II V6 with 290 hp, a 2.4-liter GDI 4-cylinder with 190 hp, or a 2.0-liter turbo 4-cylinder with 240 hp. An optional turbocharged 2.2-liter CRDi diesel engine with 199 hp is also available. These engines are paired with a six-speed manual or six-speed automatic transmission. Available drivetrains are front-wheel drive as standard or all-wheel drive as an option.

In 2018, Kia refreshed the Kia Sorento by giving it a “little bit of everything” transforming the car’s fortunes.

On the outside, the car looked the same but the detailing was different. At the front, it came fitted with a razor grille,  a crispy-looking bumper, and LED headlights and fog lamps (depending on trim). On the sides, a touch of chrome adorned the side scoops.

Inside, it came with a new gear knob, the cupholder sliding cover was removed, while the heated mid-row seats and the heated and ventilated front seats remained.

Under the hood, the turbocharged 2.0-liter engine was dropped.

In 2020 the fourth-generation Kia Sorento was unveiled. This model grew in size compared to the outgoing with its wheelbase 1.4 inches longer and the vehicle’s overall length extended by 0.4 inches.

The design of the 2021 model is edgier, whereas previous models were curvy. Its new shape features a creased bonnet, an electric-razor grille, and LED headlights at the front, while at the rear, its two-part LED taillights pivot 90 degrees, and a big rear window. On the sides, the Sorento features metallic fender flags.

The 2020 Sorento has better interior space than before, in part due to the growth in size which improves the second-row passenger experience. The third row still has limited space, the third-row seats can only accommodate adults over short journeys. With the third-row seats folded down, the cargo area can handle up to 2124 liters of cargo.

Standard features on the 2020 Sorento include an 8.0-inch infotainment screen with Android Auto and Apple Carplay, and the latest version of Kia’s Uvo software with better voice-control functions that allow for control of the audio system, steering-wheel heating, and climate settings. Other new features include a 10.25-inch infotainment touchscreen, a 12.3-inch digital instrument cluster, a wireless phone charging pad, a rotary gear selector, and up to eight USB charging ports.

The Kia Sorento humbly began life in the automotive world in 2002 and so itself climbing slowly up the ladder to where it is today. Over the years, the Sorento has amassed a solid reputation for reliability, practicality, and towing ability. And twenty years later it has become an increasingly upmarket SUV and it currently serves a viable role as an alternative to the more expensive European rivals.

We at BE FORWARD have a stock of 1400+ used Kia Sorento’s listed for sale. Please visit our site and check out our stock for your next Kia.