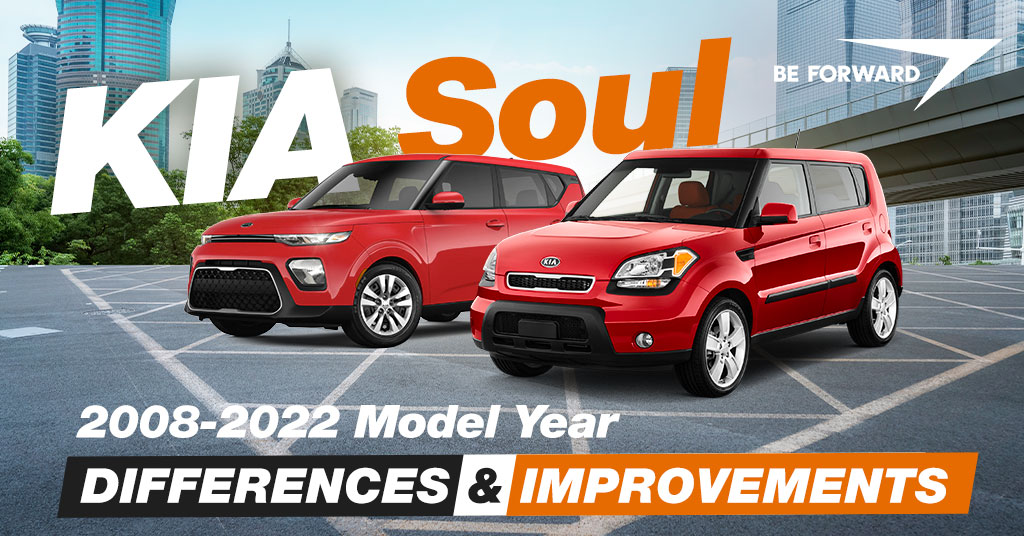 The Kia Soul is a compact hatchback produced by the South Korean automotive company Kia. The Soul was introduced in 2008 for the 2009 model year. The Soul is based on the Hyundai i20’s platform, with the Soul being more rigid, taller, and with a tough ride than the i20. The Soul is a city car, and this small crossover did well within the city limits, apart from that it was a task too tough.

Let us take a brief look at the history of the Kia Soul and find out how much it has evolved to date. Please follow through.

The first-generation Kia Soul was unveiled in 2008 for the 2009 model year.

The Soul’s exterior styling features an unusual boxy design with an angled greenhouse, sharp-looking blacked-out A-pillars, and rounded edges. The Soul was pitched directly on a territory occupied by the likes of the Nissan Cube, Toyota Matrix, Scion xB, Chrysler PT Cruiser, and Chevrolet HHR as Kia looked at capturing and establishing itself in this market segment occupied by younger drivers looking for something stylish.

The interior of the Soul is spacious and airy with its designated five (two front bucket seats and a rear bench) seats enough to accommodate four adults comfortably, while also providing enough headroom and legroom. The dashboard is clearly and neatly designed with the controls within reach and user-friendly.

The Soul offers several storage options which include a large glove compartment, a small round storage compartment at the center of the dashboard, large front door pockets that can function as bottle holders, a boot large enough to handle a couple of bags with the option to extend by folding the split/folding rear seats or making use of an additional tray that can be specified for the boot.

Kia unveiled the second-generation Kia Soul in 2013 for the 2014 model. It was based on the Kia Trackster concept and is slightly bigger with its wheelbase now at 101.2 inches, width at 70.9 inches, and height of 63.0 inches while the length remained the same.

The 2014 Soul’s styling was modernized without jeopardizing its original flavor; its looks were slightly more aggressive while maintaining the chummy bulldog look. Newly redesigned features on the Soul include a large trapezoidal lower air intake, high-mounted tail lights, and a wraparound greenhouse. The all-new “SUV Styling Pack” includes blackened A and B pillars, blackened-out lower fascias, wheel arches, side skirts, and new alloy wheel choices.

The 2014 Soul’s cabin grew in size offering better space to comfortably accommodate four passengers, although it has a five-seat configuration, a fifth passenger is a crowd.

The second-row seats can be flat-folded to extend the cargo space to 1727 liters. Under the cargo floor, there is a small storage bin with an organizer inside with several compartments. The seats are comfy and the interior is quite accommodating for a small hatchback.

In 2017, a turbocharged 1.6-liter 4-cylinder petrol engine with 201 hp and 195 lb-ft of torque was added to the lineup to replace the 2.0-liter engine. This engine was paired with a 7-speed dual-clutch automatic transmission.

The 2020 Soul retained the boxy design, but with freshly sculpted lines and very modern lighting elements. The face features a sizable two-tone false front grille, a thin line of LED headlights, redesigned DRLs and turn signals, and a wide deck of air intakes.  The greenhouse comes with roof rack mounting points and c-pillars designed to create a visual impression of airplane wings. On the sides, the Soul comes with some crisp stamps, bulging wheel arch blisters, rounded edges, and 18-inch wheels, while at the rear the tailgate has a small island of body color with a Kia badge and a large tail light that runs around the rear glass, and a roof that appears to float with a shark fin antenna on it.

The growth in length and wheelbase enabled the Soul to sprout more interior space. The front seats are supportive with the cabin able to accommodate four medium-built adults comfortably with enough leg, knee, and headroom. The cargo area is now 674 liters with the seats in place.

The Kia Soul is a good car that is almost perfect for urban use. Its entertaining dynamics, characterful personality, and tough looks are a big selling point.

We at BE FORWARD have a stock of 200+ used Kia Soul listed for sale. Please check out our list and choose your next car.