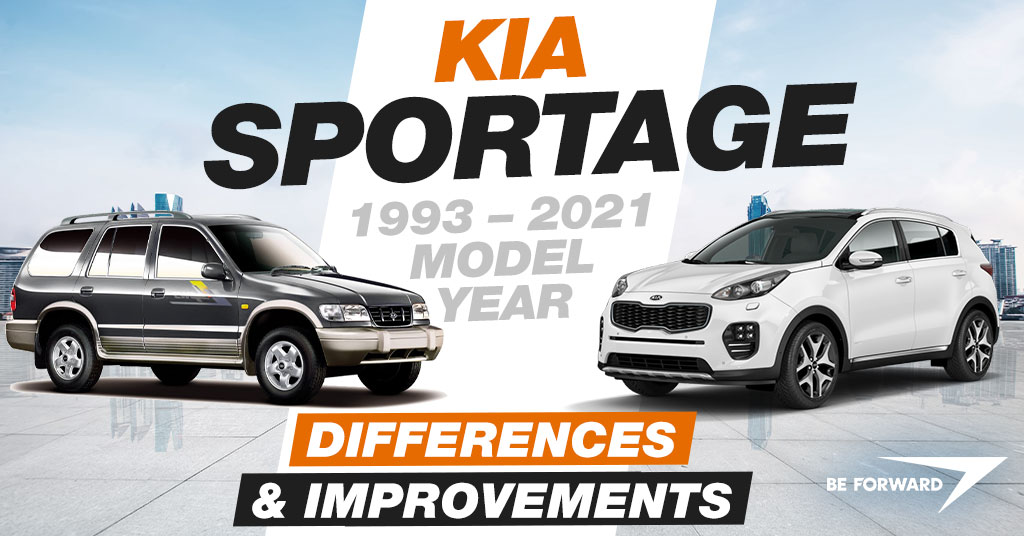 The Kia Sportage has built a legacy on versatility and affordability. Since it first hit the market in 1995, the compact SUV has earned a reputation as a pocket workhorse, appealing to a wide range of buyers with its convenient and practical features. But how has it changed throughout the years? How exactly has KIA improved on its tradition of reliability?

Let’s find out by looking at their different generations.

The Kia Sportage was sold in either a 3-door soft-top convertible or a 5-door SUV. Kia Sportage cars manufactured from 1993 – 2003 are known as the 1st generation which was developed with a Mazda Bongo engineering base platform. It shares many components such as the transmissions (early versions), engine, and differentials with the Mazda line of vehicles. This was during Kia‘s coalition with Mazda and Ford, which involved Mazda/Ford providing technology and Kia providing inexpensive manufacturing facilities for Ford.

In the Sportage, Kia offered 3 Mazda-sourced engines starting with the 2.0L FE DOHC I4 gasoline unit generating 128 hp and the 2.0L RF I4 diesel rated at 82 hp. Models with diesel engines were mostly limited to European markets, such as the more basic single overhead camshaft (SOHC) version of the 2.0L FE I4 gasoline. Generating 117 hp, this petrol engine was available from 2000 onwards. The world’s first manufactured vehicle to be equipped with a knee airbag was the Kia Sportage 1997 model year.

The Sportage returned in model-year 2005 after a 2-year pause, sharing a Hyundai Elantra-based platform with the 2005 Hyundai Tucson. The 2nd generation model was likely to favor the available V6 129 kW (173 hp), with 241 N·m. Overall fit, finish, and quality were stunningly improved over the 1st generation model.

In May 2008 a facelift model of the 2nd generation was introduced. It was manufactured at the Žilina Plant in Slovakia From 2006. In early 2009 a 2nd facelift was introduced in the UK, only a few months after its 1st facelift.

In April 2010 the SL series Sportage was released to Asian and European markets, In August 2010 the Central and North American markets and the Australian market in October 2010, for the 2011 model year.

The 3rd generation received a facelift for the 2014 model year that included LED taillights, redesigned alloy wheels, and a new grille.

The 3rd generation comes fitted with 2 engines, a 2.0L Theta T-GDI gasoline engine and a 2.0L Hyundai R diesel engine with 184 hp. In October 2010 in China, it was released by Dongfeng Yueda Kia and called the Sportage R.

The 3rd generation Kia Sportage has an average fuel economy of 8.9 to 12.4 km/l.

In the United States the Insurance Institute for Highway Safety rated the 3rd generation Sportage a “Top Safety Pick”.

In September 2015 the 4th generation Kia Sportage received its redesign at the Frankfurt Motor Show and was brought to market in 2016 as a 2017 model in North America.

The Kia Sportage offers fun and utility for those bored of the standard SUV offerings. The 4th generation Sportage crossover SUV features unique stylings with lean proportions and a handsome profile. In its attractively detailed and furnished interior, the cockpit has also been injected with a sporty flavor through the use of big, impossible-to-miss gauges.

The EX and LX trim of the 4th generation Sportage comes powered by a 2.4L 182hp direct-injection inline four-cylinder engine mated with a six-speed automatic transmission and FWD as standard, while the upper trim SX uses a 2.0L 260hp turbocharged inline four-cylinder unit. AWD is available as an option across all trims.

The 4th generation Kia Sportage has an average fuel economy of 8.0 to 11.0 km/l.

On June 8 2021, the 5th generation Sportage was unveiled with specifications disclosed in July 2021. Kia developed 2 versions of the Sportage based on the brand’s latest N3 platform architecture with different body lengths and wheelbases depending on the market.

The model is powered with a Terrain Mode that automatically adjusts various settings depending on conditions, including sand, snow, and mud. It is also equipped with electric control suspension (ECS) that provides continuous damping control in real-time. Hybrid and plug-in hybrid models are also powered by an E-Handling system. lt is also powered by a more compact shift-by-wire transmission dial for the automatic model.

Kia offers several ranges of drivetrains that include plug-in hybrid, hybrid, mild hybrid, and diesel engines for the European market. The PHEV version is powered by a 1.6L 4-cylinder T-GDi engine and a 66.9 kW permanent magnet traction electric motor with a 13.8 kWh lithium-ion battery. The whole system produces 261 hp. The hybrid model with the same T-GDi engine and a 44.2 kW electric motor coupled with a 1.49 kWh battery generates 226 hp.

The mild-hybrid model is also equipped with a 1.6L T-GDI engine, which generates either 147 hp or 177 hp. The 1.6L 4-cylinder diesel engine is available with an option of 113 hp or 134 hp of power output. A 7-speed dual-clutch transmission is available for the 1.6L while a 6-speed manual transmission is standard for all versions. Stop-and-Go technology is equipped in all European models.

The Kia Sportage could be the edgy, versatile, and reliable SUV you’ve been dreaming of. Like what you’ve read so far? Check out BE FORWARD and inquire about your next used Sportage model now!