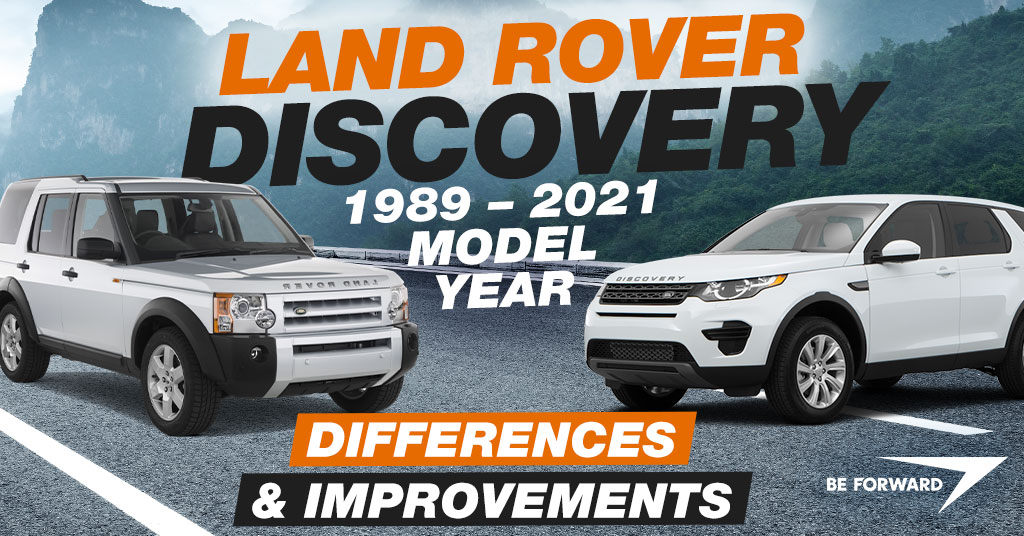 If there’s one thing that Land Rover does right, it’s making tough, sturdy 4×4 SUVs. The Discovery is known and loved for its off-road capabilities and its ability to get work done — starting with a 3,500kg towing capacity. Drivers love the high seating position that allows them to see far beyond the car’s front end, as well as the level of comfort that the Discovery is known for. Whether you’re going off-road or taking it through town, the Discovery will leave you feeling better than when you left.

Find out which models broke the mold by looking at key years from 1989 to the present.

During the 1989 Frankfurt Motor Show the Discovery Series I was unveiled, and in October that year the Disco Series I was introduced to the market in the United Kingdom after the vehicle had been developed under the internal code-name “Project Jay”. The new model was strongly based on the more upmarket Range Rover, using the same suspension, 4WD system and chassis, and a derivative body design.

The Discovery was positioned as a family car and is the first model in the Land Rover lineup that was designed to be both suitable as a daily driver for any family, and fully off-road capable vehicle, even offering optionally more seats than the Range Rover and more luggage space. The Discovery MK I remains the only model offered as a 3-door and was the only one available with a 4-cylinder petrol engine until 2017.

Originally, the Discovery was only available as a 3-door model, but in 1990 the 5-door version followed. All Series I Discoverys were fitted with 5 seats, with the option of two jump seats fitted in the boot. The Discovery was given a slightly longer rear compared to the Range Rover.

Initially – and irrespective of exterior color choice – much of the interior in all Discovery was dressed in plastic and light ‘Sonar Blue’ upholstery, with magazine holders above the windscreen, hand-holds for back passengers incorporated into the head limits of the front seats, remote radio controls on the instrument cluster, twin removable sunroof panels (including a special zip-up storage bag behind the rear seats), and a Land Rover-branded cloth fabric holdall in the front center console for oddments storage that could be removed from the vehicle and worn as a handbag using a supplied shoulder strap.

Both featured electric windows, headlight washers, heated door mirrors, and central locking, with the HL adding alloy wheels, air conditioning, driving lights, and an improved audio system. The Discovery with Tdi engine became available, rated at 111 hp (83 kW) and 265 Nm. In early-1993, a 4-speed automatic option was added to the Australian range and the HL was dropped.

In 1998, the Discovery II Series debuted. The exterior and interior were redesigned to be less useful, and still clearly an evolution of the Series I.

The back body was extended to expand load space, and the SE7 option can accommodate full-size adults on all 7 seats, as well as make them all facing forward, but at the expense of added rear overhang, which slightly reduced the car’s departure angle, when off-roading.

The 1998 – 2004 Land Rover Discovery II models are a highly useful 7-seater 4WD SUV that receives minor exterior upgrades and a more luxurious interior than Discovery I.

The exterior design was changed with the back extended to ensure cargo space was used to its full capacity. The front changed with the introduction of pocketed headlights, whilst the turn signals were moved to high-side fixtures.

Handling and riding were advanced through the addition of Active Corner Enhancement and Self-leveling Suspension.

The Discovery LR3 (2004 – 2010) features fully independent suspension. This is an air suspension system, enabling ride-height adjustment by simply deflating or pumping up the airbags. The vehicle can be lowered at high speeds to improve handling but raised to provide ground clearance when off-road.

The Discovery 4 is an updated version of the Discovery 3 and using the same Integrated Body Frame structure, the Discovery has changed front and rear light units and a restyled front bumper and grille to adopt the same rounder style, smoother, as also adopted for the 2010 Range Rover and Range Rover Sport. The Discovery 4 2009-2016 models also maintain the body-colored bumpers and wheel arches as the late Discovery 3s.

The 2009 – 2016 models are a highly practical 7-seater 4WD SUV that received an exterior revamp and an even more luxurious interior. Powerful and bold stylings meet sophistication in its massive frame, while on the inside, the Discovery 4 overflows with a premium feel. Three engine sizes are available for the 2009 Discovery 4: a 2.7L turbo-diesel V6 six-cylinder that makes 188 hp, a twin-turbo 3.0L 241 hp diesel V6 six-cylinder, and a beastly 5.0L direct-injection petrol V8 eight-cylinder which churns out 370 hp. All engines are mated to a six-speed automatic transmission with an average fuel economy of 7.2 – 9.8 km/l.

At the 2014 New York Auto Show the Discovery 4 3rd generations was shown by the Discovery Vision Concept. In profile, the exterior design looks similar to the small Discovery Sport model. In dissimilarity to preceding Discovery models, the 3rd generation has an eschewing the traditional angular design and much more rounded shape. The taillights have changed to horizontal from a vertical orientation, and the 3rd-row side glass no longer blends into the roof glass. The tailgate has been replaced with a conventional top-hinged tailgate made from composite but retaining the asymmetrically mounted license plate as a design cue from preceding generations of the Discovery. The roof is still stepped over the 3rd row, though it is now largely cosmetic in comparison to the previous models and the roof now has a strong taper to the back.

The Discovery (2016 to the present) incorporates numerous changes over its ancestors. The 3rd generation Discovery is based around Land Rover’s aluminum architecture for the first time, first introduced on the Range Rover (L405). The use of aluminum body panels and chassis offers a weight loss of up to 480 kg over its forerunner. With a new aerodynamic design and weight loss combined, a 17 percent lower Cd, achieves a fuel efficiency improvement over preceding Discovery generations.

The new Discovery (2016 to the present) models are offered with a combination of diesel and V6 petrol engines The 3rd generations Discover 4 (L462) comes fitted with 2.0L Ingenium AJ200 turbocharged I4, 3.0L AJ126 V6 Supercharged petrol engines, 2.0L Ingenium turbodiesel, and 3.0L AJD V6 turbodiesel diesel engines. All-new Discovery 4 (2016 to the present) are equipped with a standard 8-speed automatic transmission. The option of an actively locking back differential and a 2-speed transfer case (low range gearbox) is available as an optional package. On base trim models air suspension is still offered as an option while coil springs are now standard.

According to EPA both of the Discovery Sport’s powertrains (2016 to the present) have the same fuel economy estimates 8.0Km/L in the city, 10.2 Km/L on the highway, and 8.9 Km/L combined.

Apart from passing in different generations, The Land Rover keeps their tendency of manufacturing luxury and good off-road vehicles such as Discovery models. Land Rover is still producing vehicles with advanced safety features which seems to be their first priority in their lineup.  The Discovery 4 proves this and the Discovery 4 comes with some attractive exterior design that will make you pause for a while and stop doing whatever you are doing to admire the wonderful work of art.

The Discovery has better fuel economy compared to the previous generation due to the new aerodynamic design and weight loss. In 2019 the Land Rover marked the 30th Anniversary since the launch of the Land Rover Discovery by releasing a special edition model.

For a high-performance Discovery 4 the best choice would be the 2013 Discovery 4 premium seven-seater 4WD SUV with a 5.0L V8 which generates the maximum power outputs of 375 hp.

You can purchase any of the Discovery 4 models with any engine size, type of fuel used through our official BE FORWARD.