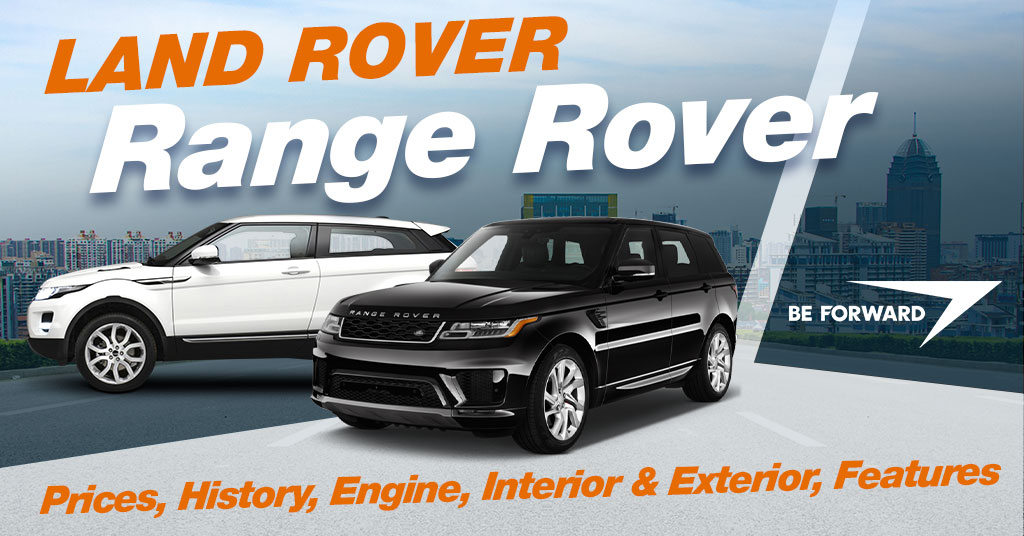 Range Rover is a 4×4 SUV built for offroading by the British car manufacturer Land Rover. The first generation of Range Rover was produced from 1970 to 1996. It was available only in a two-door body up to 1981, although before this, four-door models were produced by specialist firms.

The early Range Rover was not designed as a luxury-type vehicle. Convenient features such as cloth/leather seats, carpeted floors, air conditioning, power steering, and wooden interior trim were fitted later.

The Range Rover Evoque came into production in July 2011. It is available with a 3-door or 5-door hatchback body, front-wheel drive, or 4-wheel drive, and with a 2-liter turbocharged petrol engine or 1 or 2 different power output 2.0-litre turbo-diesel engines.

In March 2017 Land Rover unveiled a mid-size crossover using the Range Rover name and named the Range Rover Velar which serves as the base for its design and on its bodywork its roofline running away and uses the same platform as the Jaguar F-Pace.

The Autobiography model features a heated steering wheel, panoramic roof, and a beautifully designed dash, while the SV Autobiography Dynamic is almost worth considering as a separate model.

It is the most luxurious on the lineup, though, with almost every conceivable toy on it. That includes 24-way adjustable heated, massaging, cooled front seats, four-zone climate control, ebony quilted perforated semi-aniline leather upholstery, and cabin preconditioning with remote function.

For feel, sense of image, and superiority, the Range Rovers can line up against limos concerning legroom. Legroom used to be what let it down, but the addition of the LWB to the range sorted that out. If you need to take it one step further there’s the option of Executive Class Seating arrangement at the back, providing 2 individual chairs with 40 degrees of recline and a powered center console that, when in place, provides a 3rd middle seat. There’s also 3 zone ambient lighting and various multimedia options such as a 1,700w 29-speaker Meridian stereo.

There is also an option for a 13-speaker plus subwoofer 380W affair in Range Rover Vogue, while the Autobiography and Vogue SE is upgraded to 19 speakers plus subwoofer and 825W.

Range Rover can keep up with its German competitor in terms of luxury and refinement, but what makes it differ from them is its mega off-road ability and huge towing power.

The Range Rover is also quite attractive and refined inside no matter which engine you choose, while the smooth 8-speed automatic gearbox contributes to a relaxed driving experience.

The Range Rover standard adaptive damping and air suspension deliver an attractively composed ride, which is only set up when the large wheels thump into a badly repaired pothole. If comfort is your priority, the long-wheelbase car is even more indulging.

Additionally, the Range Rover’s steering is well-weighted and accurate, and the optional Active Lean Control to tighten body control even further can be added up.

Pricing this monster of an SUV can be a real shock. The base Range Rover Sports is going to set you crazy and this beautiful monster is not for everyone is for the class people with cash. The starting price on BE FORWARD is from USD 4,470. Looking for a Used Quality Land Rover Range Rover from Japan? You can access a lot of Range Rovers from our Store – BE FORWARD.