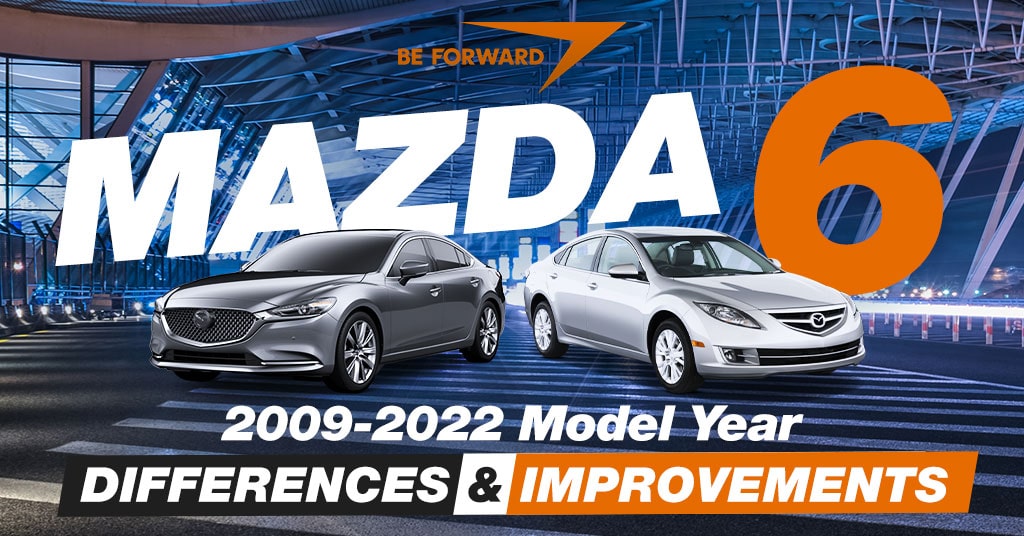 The Mazda 6/Atenza is a mid-size car produced by the Japanese automotive company Mazda. Mazda 6 was unveiled in 2002 for the 2003 model year as a replacement for the outgoing Mazda 626/Capella.

The Mazda 6 has evolved and is currently in its third generation. Here we will take a brief look at how it has evolved throughout. Read on.

The first-generation Mazda 6/Atenza was unveiled in 2002 for the 2003 model year. It was available in three body styles which were a standard sedan, a five-door sedan-like hatchback, and a wagon.

The exterior of the Mazda 6 looks sharp and sporty with the option of three-body choices that gave customers a wider choice. The Mazda 6 was available in several trims depending on the market. They included a limited and classic trim as a sedan, a luxury trim as a sedan or liftback, and a luxury sports trim as a liftback. The top trims came with features such as Bluetooth connectivity, a sat-nav system, and a Bose sound system, while the sportier trims came fitted with bucket seats.

Between 2005 and 2007 a Mazda speed Mazda 6/Atenza sedan with a tweaked chassis, body, and sportier looks was introduced, it came fitted with a turbocharged 2.3-liter 4-cylinder petrol engine paired with a 6-speed manual transmission and an all-wheel-drive drivetrain.

The second generation of the Mazda 6 was unveiled in 2007 for the 2008 model year. This model was larger than the outgoing but was also lighter and sportier. It was still available in three body styles like the previous model.

Exterior changes on the 2008 Mazda 6 featured a combination of sharp angles and curved lines. The face features a wide v-shaped pentagonal grille and swept-back samurai eyes headlights that gave the car a sporty look. The 2008 model is taller, longer, and wider than its predecessor, but it was also lighter by 35 kg.

The interior is comfortable and spacious for four medium-built adults. The front bucket seats are comfy and supportive with average-height bolstering, the rear seat designed for three passengers can accommodate two occupants comfortably with enough head, shoulder, foot, and knee room. High-end models come fitted with a sat-nav and a Bose sound system.

The third generation of the Mazda 6 was unveiled in 2012 for the 2013 model year. It was bigger, lighter, and leaner than the model it replaces and had an elegant, sleek, and noticeable styling. This model is available in sedan and wagon body styles only.

The 2013 Mazda 6 followed Mazda’s KODO, Soul of Motion theme by adopting the familiar Mazda face of recent Mazda models. A long low-set bonnet that runs to the deep air-gulping winged radiator grille, sleek and sculptured lines that run on the sides, a shapely rear, and a curved roof all make up the exterior while staying true to the design language that identifies it with its predecessor.

The cabin is spacious, the driving position is great with a tilt-telescopic steering wheel, and an eight-way power-adjustable seat set relatively high. The front seats are well-bolstered, while the rear seat has enough head, leg, and foot room for even the tallest of adults. It has a 440-liter boot with a large boot opening.

The instrument cluster has a 3.5-inch multi-information display that furnishes clear and concise information such as fuel consumption and coolant temperature, while the 5.8-inch infotainment touchscreen at the top of the center console is used as satellite navigation and reversing camera display.

Other features include USB, Bluetooth, and iPod connectivity with voice recognition. The system also has a mail function via Bluetooth connectivity that enables the display and readout of SMS, MMS, and email via the 5.8-inch infotainment touchscreen.

In 2018, the 6 received a mid-life update with several changes to its interior and exterior.

Exterior changes included improved suspension and chassis, a new grille and new standard LED headlights in place of the Xenon are some of the exterior changes. Step into the cabin and you are met with a restyled dashboard trim and new climate control knobs, Japanese Sen wood interior trim, Nappa leather upholstery, a new infotainment system, ventilated front seats, upgraded safety systems, and better noise insulation that collectively make the 6 more elegant. The seats were also touched to improve their comfortability and finished with higher-quality materials giving the car a touch of luxury.

Under the hood was a new award-winning turbocharged 2.5-liter SKYACTIV-G petrol engine, which complements the 6’s sharp handling.

The Mazda 6 is one of the best cars in its class and has proven time and time again. Since its introduction in 2002, the Mazda 6 has been punching above its weight. It’s one of a few family saloons that is fun to drive, with good road manners and some impressive and efficient engines that perform very well with good fuel economy. Recent releases loaded the cabin with upscale features with plenty of safety tech and infotainment systems.

We at BE FORWARD have a very large stock of used Mazda 6/Atenza. Please visit our site and check out our stock to choose your next car.