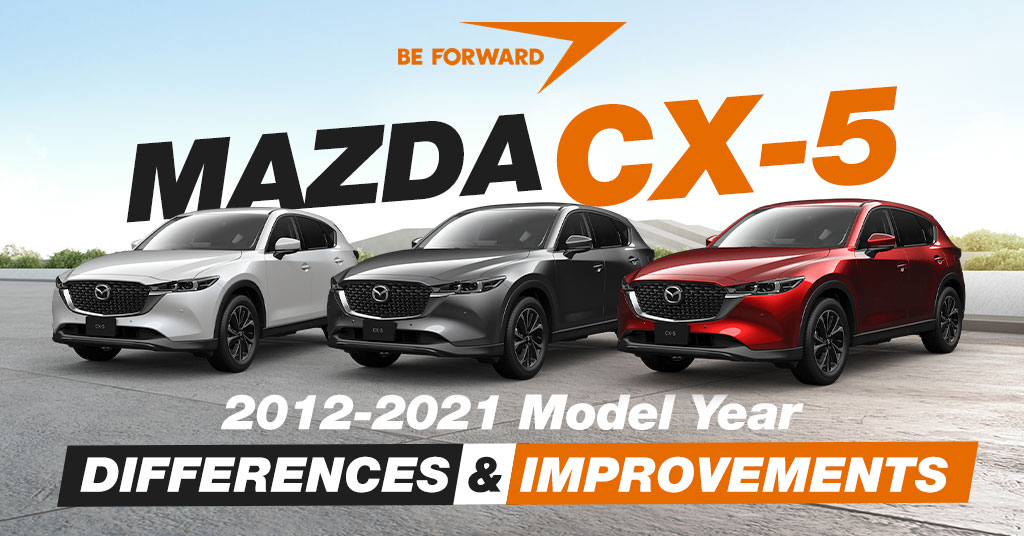 Mazda CX-5 is a compact crossover SUV manufactured by the Japanese company Mazda Motors from 2012 to the present.

The CX-5 was the first Mazda model built on Mazda’s KODO “Soul Motion” design and new SKYACTIV® engine technology that together brings about efficiency, lightweight construction, and agility. The CX-5 is an all-round family SUV that’s comfortable and fun-to-drive.

Let’s briefly take a look at what makes the CX-5 one of the best-selling Mazda models. Please read on.

The Mazda CX-5 was unveiled in 2012 as a 2013 model. It slotted in the compact SUV market segment and came in as a successor to the larger CX-7 and the Tribute.

The CX-5 was designed and built using Mazda’s KODO design language and SkyActiv engine technologies, which introduced new engines, transmissions, and chassis that improved the car’s efficiency and driving dynamics while decreasing emissions.

In 2016, the CX-5 received a mild update that gave it a bolder look more tech fittings, and revised equipment levels, which kept it on par with competing models.

Interior changes include a redesigned dashboard, Mazda’s Human-Machine Interface (HMI) infotainment system with Bluetooth connectivity, better storage capacity, and an electronic parking brake. Another update followed that made a touchscreen navigation system and a rearview camera standard in all models except the base model.

In 2017, Mazda released the second generation of the CX-5, unveiling a car that is modern and aggressively looking.

Exterior changes include a facial with LED foglamps and dynamic steering LED headlamps, while at the rear it was fitted with aggressive-looking full LED taillamps. On the sides, the CX-5 resembles BMW crossovers. Its rear sloping roof and rear windows line create an impression that the car has limited rear headroom which is not the case. The car has enough head and legroom at the rear, with only the cargo area being affected by the sloppy roof.

Under the hood, nothing change much, the CX-5 continued using the previously used engines which were the 2.0-liter PE-VPS I4 and 2.5-liter PY-VPS petrol and the 2.2-liter SH-VPTS twin-turbo diesel mated with the same six-speed manual or automatic transmissions.

In 2019, Mazda introduced a turbocharged 2.5-liter PY-VPTS inline-4 petrol engine with 250 hp. This engine was fitted on the higher trims of the CX-5.

The Mazda CX-5 is a compact crossover SUV that’s ideal for buyers who need a car that’s good-looking, fun to drive, and practical for daily commutes. The compact SUV segment is an extremely tough category, but the CX-5’s sharp handling, efficiency, reliability, responsive performance are some of its main selling points.

Apart from being a car that is fun to drive, the CX-5 also offers good practicality and enough boot space.

Please visit BE FORWARD and check out our list of 600+ used Mazda CX-5 for sale.