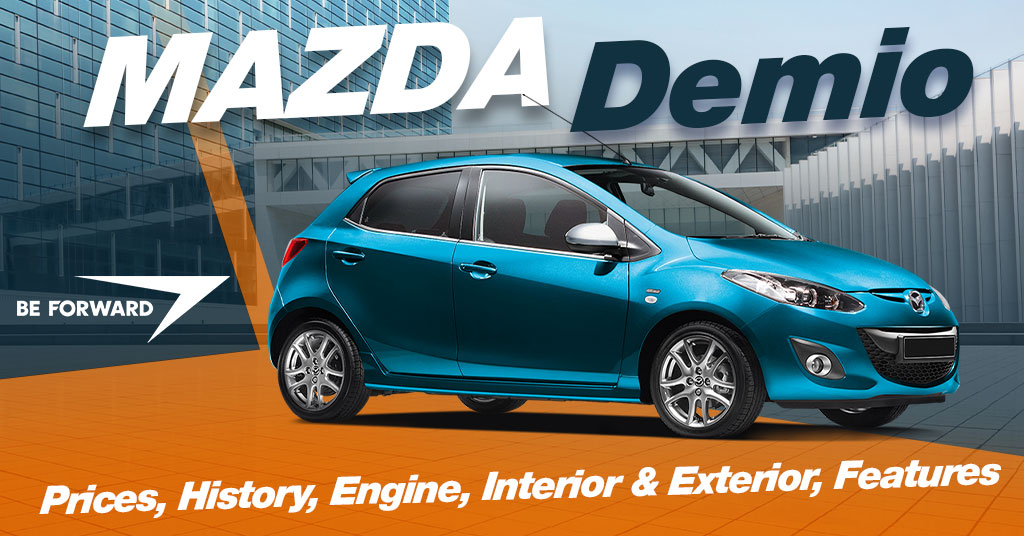 The Demio has been around for a while now and as a result, there are plenty of used Demio’s available for sale. We at BE FORWARD have a large list of used Demio’s listed for sale with their prices ranging from US$ 590 to US$ 21,590.

The second-generation Demio was built on the DY Platform (another D platform). In this generation, Mazda dropped the b-series engines and introduced the z-series engines which are an evolution of the b-series.
Mazda introduced the 1.3-liter (ZJ-VE) inline-4 petrol engine that produces 90HP at 6000 rpm and an average consumption of 18.9 km/l, and the 1.5-liter (ZY-VE) inline-4 petrol engine that produces 111 HP and an average consumption of 14 km/l. These engines are mated to a 5-speed manual or 4-speed automatic transmission used in the previous generation. In this generation, Mazda introduced e-4WD whereby an electric motor was installed to power the rear wheels to add traction when needed.

The third-generation Mazda Demio was built on another of the Mazda’s D platforms, the DE platform. It’s a platform that employed lightweight materials and reduced the overall car dimension. Mazda added engine options on this generation, the 1.3-liter ZJ-VE and the 1.5-liter ZY-VE continued being used on this generation’s Demios, but also Mazda introduced the 1.5-liter turbo-diesel S5 SkyActiv-D engines that produced 103 HP at 4000 rpm and average fuel consumption of 12 km/l. This third-generation Demio’s came with a 4-speed auto, 5-speed manual, or CVT transmissions.

The fourth-generation Demio was based on a varied Mazda CX-5 platform. In this generation, Mazda introduced some new technologies such as the i-STOP that turns the engine off when the car is stationary and the i-ELOOP (Intelligent Energy Loop) brake regenerating system that uses the braking to charge the capacitor for all car electronics (climate control and audio systems) and the surplus electricity is used to charge the starter battery. The Demio (Mazda2) was equipped with a 1.5-liter SkyActiv-G F-P5 petrol that produces 108 HP at 6000 rpm, the 1.5-liter SkyActiv-D S5-DPTS diesel that produces 104 HP at 4000 rpm, and the 1.5-liter SkyActiv-Hybrid F-P5+ engines. These engines are mated to either a 5-speed manual or a 6-speed automatic transmission.

The first generation (1997 model) Demio’s rear seat can slide backward or forward by 60mm enabling the alteration of luggage or legroom. It can also be folded 50/50 split or folded increasing the luggage room. These alterations alter the luggage space between 365 liters and 679 liters.

The cabin has an airy feeling and ease of access thanks to the Demio’s high ceiling. The rear-seat passengers enjoy a very good view which is due to the rear seat being 60mm higher than the front seats and a huge glass area.

The second-generation (2005 model) Demio came in three trim levels namely Cozy, Sport, and Casual for the Japanese market, while in the European market they had the S, TS (aka Antares), and TS2 (aka Capella) trim levels. This generation’s Demio offered an adjustable steering wheel, driver seat height adjustment, central locking, electric windows, and power mirrors.

The third generation (2008 model), model Demio offers extra headroom, enough space in front and at the back. This model has a 280-liter boot with the seats in place, if you fold down the rear seats, the boot space increases to 960 liters. Its dashboard is well designed, it features circular controls with a large visible speedometer, the radio and CD player are installed into the dash and the gear lever is located on the dash which makes it easily accessible.

The fourth-generation (2014 model) comes with a USB port for its audio system. It features comfortable supportive seats at the front, while the rear seats are not that comfortable and have limited legroom, a three-spoke steering wheel, storage trays, and cup holders between the seats, plus plenty of room enough for four. When rear seats are folded, boot space increases to 787 liters.

The first and second-generation Demio’s belonged to the Supermini class, most of these Demio’s come fitted with a rear spoiler and roof rails.

The 2008 (third-generation) Mazda Demio’s body changed from a supermini to a hatchback. A three-door hatchback Demio was released on this generation for select markets.
On the outside, it features smooth exterior lines with contemporary looks that hold up well. The front facial comes with a “grinning” grille, unlike recently released Mazda’s with bolder trapezoidal grilles.

The first generation Demio had only the driver-side airbag and there is no airbag for other passengers.

From the second generation, all Demio’s came with twin front airbags, antilock braking (ABS) system and Electronic Brake Force Distribution (EBD) as standard, and Stability Control as an option.

The third generation like the previous generation comes with two airbags (passenger and driver), ABS, and EBD as standard, while Stability Control is optional.

ALL MAZDA DEMIO FOR SALE