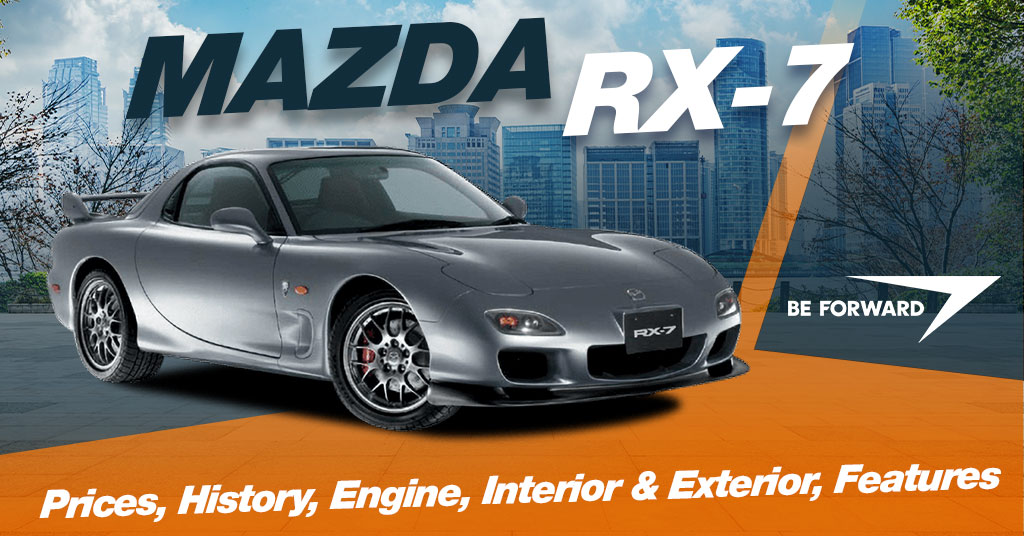 The RX moniker has been colossal in Mazda’s history and while there have been many venerable RX’s over the years; the most famous of them all is certainly the RX-7. Three generations have been produced from 1978 to 2002, with sales of over 800,000 cars built in 20+ years.

Launched in March 1978, the Mazda RX-7 replaced the Savanna RX-3. The RX-7 is a 2-door rear-wheel-drive, front-mid rotary engine powered sports coupe that was manufactured by Mazda.

The RX-7 has a nice and well-designed interior with the driver afforded a good driving position and the steering wheel is fairly big in diameter with some nice stitching which is also evident on the gear knob and handbrake. Equipment levels are beautiful by today’s standards a pair of plastic luggage bins, leather upholstery, air conditioning, powered mirrors, electric windows, and an AM/FM stereo cassette player.

The instruments are simple, good, and feature a bold typeface. The tachometer can read up to 9000 rpm, and the speedometer has a maximum speed of 180 mph. Gauges for oil temperature, oil pressure, and fuel level sit to the left of the tachometer to complete a well-designed analog binnacle.

Looking ahead via the windscreen your eyesight is caught by the bends, the rising line of each edge plunging up towards you while each door mirror captures a reflection of the long arc of the door tops that flow into the back wheel arches.

The first series RX-7 commonly referred to as the “SA22C” was powered by a Wankel engine positioned behind the front axle. This version came with two engines, one producing 105 HP and the other 115 HP. The drive option was rear-wheel-drive and the 5-speed manual transmission was standard, although there were also 4-speed manual/automatic and 3-speed automatic as options. Underneath the RX-7 featured 4-link rear suspension at the rear with Watt linkage and 50/50 weight ratio.

The 4th series RX-7 was launched in 1985; it went down the same path as the first generation but with some minor differences. This series was more of a softer sport-tourer compared to the previous which was considered a pure sports car.

Mazda also made disc brakes as standard, with the introduction of the Dynamic Tracking Suspension System (DTSS) as well. The rear suspensions were revised, Mazda incorporated the special toe control hubs that were capable of introducing a certain degree of passive rear steering under cornering loads.

In 1988 Mazda introduced the RX-7 convertible which came with either a naturally aspirated or turbocharged engine. The convertible featured a removable stiff section over the passenger’s head and a rear folding textile section with a heat-able rear glass window. The folding part of the convertible was very well-engineered as it folds into the body assembly as a complete unit.

In 1992 Mazda released the Series 6 of the RX-7. It was strikingly one of the best-designed cars from Japan at the time of release. It had a small ground clearance, the bodywork was curvy, flawless, and featured an elegantly organic style, unlike the previous boxy FC series. The total weight of the Series 6 RX-7 was significantly reduced to under 1300kg compared to the FC series whose weight was 1500kg, the center of gravity was lowered, power increased, and improved driving dynamics made this FD series RX-7 the best car on the market at the time.

In 1996 Series 7 of the RX-7 was released with some slight modifications. Some of the changes were an improved intake system, a simplified vacuum routing manifold that gave rise to a 10 HP increase in power, and a 16-bit ECU. This power increase was only evident on the manual transmission model as it came to effect at above 7000 rpm which was the redline for automatic RX-7. The RZ trim came with 17 inch BBS wheels and larger brake rotors.

In 1998 the Series 8 RX-7 was released as the final model. In this final series, Mazda improved the intercooler, radiator cooling performance by fitting a new front panel and installed more efficient turbos. The interior didn’t go untouched as the seats, instrument cluster, and steering wheel were changed. Some models were also fitted with an adjustable rear spoiler and the antilock braking system also received some improvements to improve cornering ability while braking.

If you are all about performance and some luxury interior features, Mazda RX should be the automatic choice. The Mazda RX is more versatile when it comes to driving performance, able to deliver everything from a sporty ride to a relaxing driving experience. Looking for a Mazda brand? Just visit our website BE FORWARD.

ALL MAZDA RX-7 FOR SALE