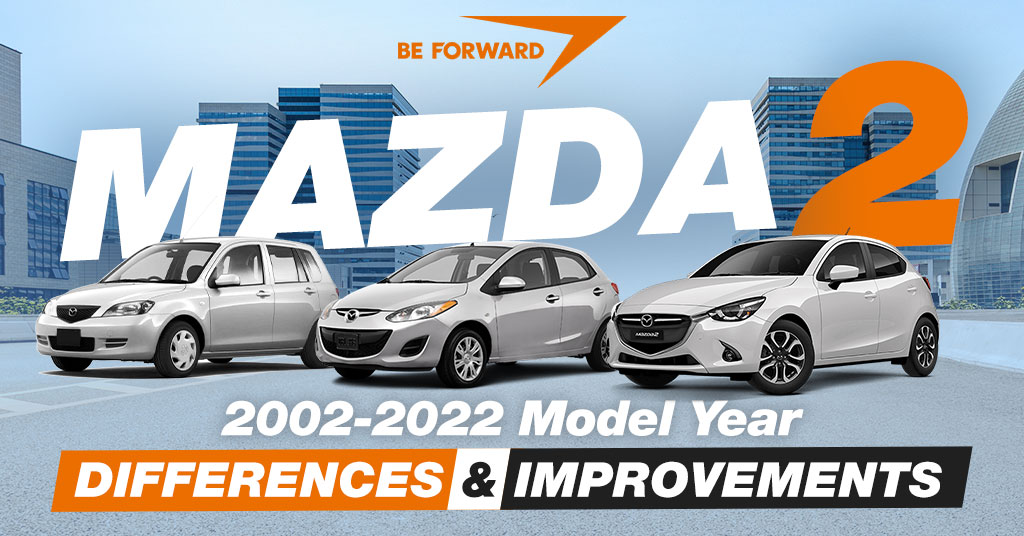 The Mazda 2 (Demio) is a subcompact car manufactured and marketed by the Japanese automotive manufacturer Mazda. The Mazda 2 was unveiled in 2002 as a predecessor to the first generation Mazda Demio and is currently in its fourth generation.

The Mazda 2 has been sold as the Mazda Demio in Japan and other markets until 2019 when the name was dropped completely. The latest Mazda 2 was released in 2022.

Let us take a look at how it has evolved since 2002. Please follow through.

The Mazda 2 (Demio) was released in 2002 as the second generation of the Mazda Demio.

The first-generation Demio was introduced in 1996 and was based on Mazda’s DW platform. In 2002 Mazda introduced a redesigned version built on the DY platform, developed jointly with Ford. This platform was designed to accommodate the provision of an all-wheel-drive system, reduce the production cost, and improve on-road performance. With this release, Mazda introduced the Mazda 2 name in place of Demio in most markets except Japan.

The design of the Mazda 2 was a fusion of a small car and a compact SUV which resulted in a car with a hatchback body style and high ground clearance. Its redesigned front fascia featured a grille and headlight styling inspired by its bigger sibling the Mazda 6. On the sides, the car featured a watered-down beltline, and at the rear, a flat rear end.

Inside, the Mazda 2 is spacious, its high roof design provides enough headroom for all occupants. The car has five comfortable and supportive seats that are high-mounted providing a high seating position with enough leg and knee room. The car’s interior width made the car’s rear bench better for two adults instead of three due to the lack of shoulder room.

The second-generation Mazda 2 (third-generation Demio) was officially unveiled in 2007 at the Geneva Auto Show.

This generation Mazda 2 is built on the joint Mazda (DE/DH)/Ford (B2E) platform. This platform utilizes lightweight materials with the car’s overall dimension also reduced. This generation was more of a conventional hatchback unlike its predecessors boxy mini MPV lines with a high roof. Other new features on this Mazda 2 which is available as a 3- or 5-door vehicle include boomerang-shaped taillights and sharp creases on the sides.

Inside, the second-generation Mazda 2 has 5 seats that are very basic with enough leg and headroom, the interior is basic as well. At the front, there are several extra storage compartments, which include door pockets with bottle holders, a two-tier glovebox, and cup holders. The seats are nice and stylish covered in cloth upholstery, but not very comfortable for long journeys. This 2 has a 250-liter boot that is extendable to 787 liters by folding flat the rear seats.

In 2014 Mazda unveiled the third generation of the Mazda 2. This model is based on a similar but shortened platform to that of the Mazda CX-5 and a “Kodo” design language similar to that of the CX-3 which gave it curves that are “in harmony with nature”. Its facial features a shield-like pentagonal grille and a bumper with a big opening that creates the sporty character of the car. The third-generation Mazda 2 is available as a 4-door sedan or 5-door hatchback.

Inside, the car was neatly designed and put together. The 2 is spacious enough to accommodate four adults comfortably on its five seats and it still remains with enough room on its boot enough for weekly shopping. Standard and optional interior features include air conditioning, power mirrors, power windows, power locks, a 4-speaker CD stereo system with AUX and USB inputs, remote keyless entry, tilt steering wheel, 60/40-split folding rear seat, a sat-nav system that can be controlled by rotary knob placed between the front seats.

The 2 came fitted with a choice of petrol or diesel Skyactive engines which include the 1.5-liter (F-P5) petrol with 140 hp and 110 lb-ft and the turbocharged 1.5-liter (S5-DPTS) diesel with 104 hp and 184 lb-ft. Other options include the previously used 1.3-liter (P3-VPS) petrol and a 1.5-liter mild-hybrid petrol system. These engines were paired with either a 5-speed manual, 6-speed manual, or 6-speed automatic transmission.

Late in 2021 Mazda unveiled an all-new Mazda 2 hybrid that is based on the Toyota Yaris as part of the Toyota and Mazda partnership.

The 2022 Mazda2 is available in four trims (depending on the market), starting with the base SE-L which comes fitted with features such as Apple CarPlay and Android Auto, while the upper Sport trim gets 16-inch alloys, privacy glass, and wireless Apple CarPlay/Android Auto, next up is GT Sport which adds head-up-display and leather seats, and lastly is the highest spec GT Sport Tech. which gets all the above and adds a 360-degree parking camera, blind-spot monitoring, heated steering wheel, and adaptive LED headlights.

Inside everything feels well assembled and robust with some nice touches commonly found in high-spec cars with a strip of trim that runs from the dashboard to the doors, matching the seat trim. The cabin is spacious enough for most to accommodate passengers comfortably and the five-door-only body style is convenient. The 2 has a 280-liter boot extendable to 950 liters with the rear seats folded flat.

For the 2022 model year, Mazda has given the 2 some relatively significant updates to boost efficiency. The main is the addition of Mazda’s e-Skyactiv G mild-hybrid powertrains.

The Mazda 2 is a small, stylish, sharp-looking, and exciting car that is built for frugal daily operations. It is a car known for its impressive fuel economy with an uncompromised engine power that delivers an exceptional driving experience. If these are the qualities that you are looking for in a car, then the Mazda2 will be the right choice.

We at BE FORWARD have a large stock of used Mazda 2. Please visit our site and choose a car of your choice.