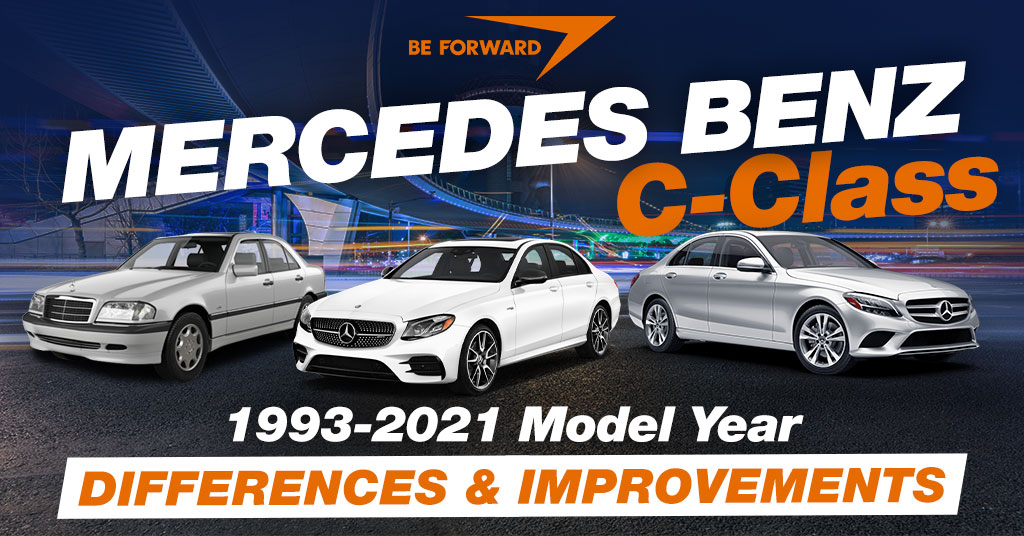 The Mercedes-Benz C-Class is a midsize luxury executive car manufactured by Daimler AG. The C-Class is a car known for its high levels of luxury, comfort, reliability, and performance which lead to more than eight million units being sold since its introduction in 1993 as a successor to the outgoing Mercedes Benz 190.

The C-Class is currently on its fifth generation from the year 2021. Let’s see how it has evolved over the years throughout the five generations!

The C-Class was a step in the right direction from its predecessor the 190 series angular lines. The C-Class featured new styling and was more spacious than 190E despite its growth not being that significant. The C-Class was available in three trim levels which were the Esprit/Classic, Elegance, and Sport. The base Esprit/Classic trim came with lowered suspension compared to the Elegance with its target market being younger customers. The mid-trim Elegance has better ground clearance due to its higher suspensions that offer bigger wheel travel and more comfort. The Elegance model also featured a clear (colorless) turn-signal lamp cover. The high-end Sport trim has lower ground clearance just like the Espirit/Classic trim, but its suspensions are much stiffer and fitted with wide tires as standard.

The interior of the W202 comes with the option of different color schemes depending on the trim level. Standard features include air-conditioning and power windows, with a sunroof available as an option.

The Mercedes-Benz C-Class (W203) is a five-passenger compact car manufactured by the German automobile company Mercedes-Benz. This second-generation C-Class W203 was in production from 2000 to 2007. It was available in three (Sedan, Coupe, and Wagon) body styles, unlike its predecessor which had only two (Sedan and Wagon).

The C-Class W203 featured a new design language that featured some new cues, a curvier and longer front-end, a sportier and shorter rear-end, and double-rounded twin headlights.

The interior of the W203 is neat and elegantly finished with top-quality materials and numerous options. The instrument cluster was redesigned. It featured two round meters for speed and a rev-counter with an LCD for the onboard computer in between them. The multifunctional steering wheel was redesigned, it featured small round buttons in place of the previous large and squared buttons.

Standard and optional features include an automatic climate-control unit, Bluetooth connection, CD-Radio, Navigation Systems, and a fridge under the armrest (between the front seats).

The seats are comfortable and supportive, with heating available on all seats and dedicated rear air vents.

Under the hood, most of the engines fitted on the W203 C-Class were carried over from its predecessor the W202 C-Class except a few such as the 3.2-liter diesel engine which was new in the lineup. These engines were mated with a 6-speed manual transmission as standard, and an optional 5-speed automatic. The 4matic all-wheel drive was also upgraded.

The C-Class (W204) featured square designs with a spacious cabin and comfortable. When compared to the W203, the W204 is more spacious with a longer wheelbase, which equated to extra legroom for the rear passengers. The four-round headlights on the previous model were replaced with square and angular lights and the grille was offered in either the classic Mercedes or a sporty one with the 3-pointed star front and center. The C-Class (W204) is sportier than the previous C-Class models which made it appeal to younger buyers and was a big success.

Inside, some of the new features included dial gauges common in roadsters and coupes. Standard infotainment is an Audio 20 with Bluetooth connectivity, while a multimedia Command APS with a 7” TFT color screen with navigation was an option.

The C-Class W204 comes fitted with a supercharged 1.6-liter or 1.8-liter (M271) inline-4 Kompressor petrol engine, with the 2.1-liter (OM646) inline-4 diesel engine as an option.  These engines are mated to either a 5-speed automatic, a 6-speed manual, and or a 7G-Tronic automatic transmission.

The Mercedes-Benz C-Class W205 is a compact executive car manufactured and marketed by the German company Daimler AG. The W205 is the fourth generation C-Class whose production ran from 2014 to 2020.

The W205 is built on Mercedes-Benz’s new Modular Rear Architecture (MRA) platform which is significantly lighter and rigid than the previous platforms as it extensively uses aluminum throughout the body, which led to this car being 100 kg lighter than its predecessor.

The exterior of the C-Class W205 is organically styled with an upright front with a plate-size 3-star badge on a 3-point grille flanked by full-LED headlamps.

The C-Class has one of the most luxurious cabins in the class, with a high-end design and first-rate materials throughout. The front seats are comfortable and supportive with plenty of legroom and headroom, while at the rear there is limited legroom and headroom. The driving position is great and the controls are within reach.

The Mercedes C-Class W206 is a compact luxury car manufactured and marketed by the German company Daimler AG. The C-Class W206 is the fifth and current generation of the C-Class whose production began in 2021 (this year) and is still in progress. The W206 C-Class is currently available as a Sedan and Wagon, with the release of the Convertible and Coupe expected later.

The W206 C-Class style is modeled very close to its larger siblings, the E- and S-Class, with its headlamps, grille, the hood’s power bulges, and tail-lamps that extend into the boot lid, giving the car greater visual width.

Inside, this latest C-Class cabin has contemporary looks. Once inside you are met with newly styled front seats that feature a mixture of materials creating a strong impression, and the optical fiber lighting makes the interior ambiance even more special. The driving position is great, with plenty of seats and steering adjustment. Visibility is also good, but the presence of a host of sensors and cameras that assist during parking makes things better.

Depending on trim, the C-Class comes with either a 10.25- or 12.3-inch instrument display and a 9.5- or 11.9-inch portrait-style central touch screen on the redesigned dashboard. Most controls such as air-conditioning, have been incorporated into this system reducing the number of physical buttons. All this is made possible by Mercedes-Benz’s MBUX system, which offers conversational speech control for most functions.

Among the latest key features of the C-class is the optional new head-up display that features augmented-reality functions. It displays information on the windscreen as a 29.5-inch image at a virtual depth of close to 4.5m.

Under the hood, this C-Class is available with four-cylinder engines that incorporate a 48-volt mild-hybrid system, which utilizes an integrated starter/generator that recovers energy lost during braking hence improving efficiency.

The Mercedes Benz C-Class is a leading Mercedes brand and it is so for some good reasons. The C-Class in its 28 years of production has always lived up to its buyers/owner’s expectations, delivering luxury, reliability, and comfortability at a bargain. All generations of the C-Class are great buys, but the fourth generation was well received and it outsold every other generation.

We hope this article will help you get some insight into the C-Class family and prove to be valuable in guiding you when the time arrives when you plan to buy a used C-Class.

Please visit BE FORWARD and check out our list of 800+ used Mercedes C-Class for sale.