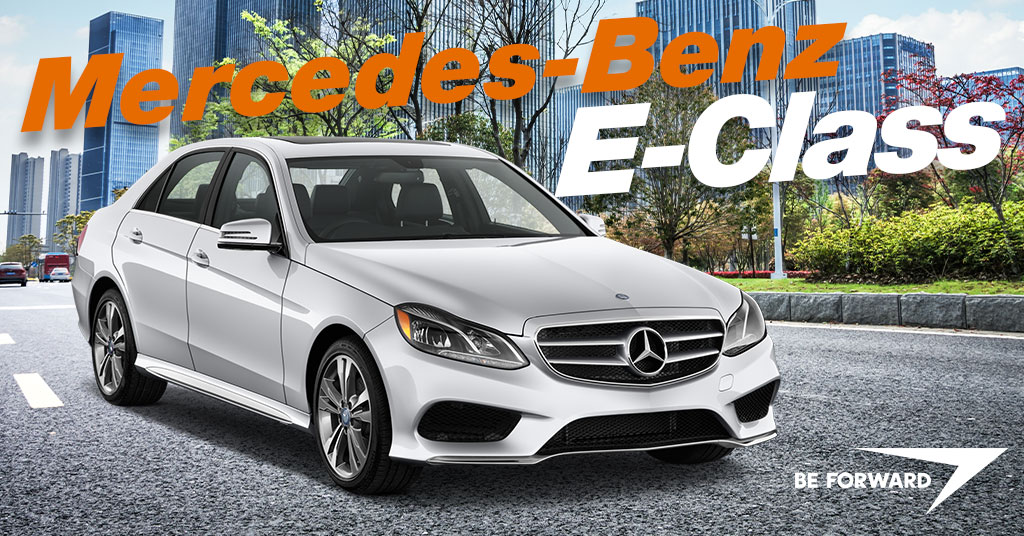 The face featured two gem-like headlights that are shaped precisely as part of the wings, while the grille is three-dimensional coated in chrome.
In 2013, the E-Class received some extensive modernization and a new design language. For the first time, the E-Class model range was now offered with two different faces: the standard trim came with the traditional chrome radiator grille with the Mercedes star on the bonnet, while the AVANTGARDE line featured a sporty front design with Mercedes star on the grille.

Get inside the E-Class and you won’t find anything cheap-looking. Good quality plastics, and some nice metal finishes. All E-Class sedans come with faux leather upholstery and the air vents are made with some stylish metal. The control dials are within reach and easy to read and operate, with a rotary control knob on the center console that can control many functions.

Standard interior features include climate control, sat-nav, and DAB digital radio. Plus you get Bluetooth phone connectivity and a USB port.

The Mercedes E-Class is a big car and the cabin is so spacious, enough for five people to fit in comfortably. All passengers are afforded plenty of headroom, legroom, and knee room, except the person sitting in the middle rear seat whose legroom is affected by the large transmission tunnel.
As an option, some E-Class models come with active multi-contour seats with luxury headrests and two-stage driving dynamics support and massage functions.

The 4th generation E-Class is available with diesel or petrol engines that range from 4-cylinders to 8-cylinders with their output power ranging from 136 HP to 388 hp. The V6 and V8 models featured Mercedes-Benz 4MATIC all-wheel-drive system as an option. The top of the range E 63 AMG with 525 HP followed was later released in April 2009.

In 2013 the E 350 BlueTEC, the world’s first nine-step automatic torque converter 9G-TRONIC was released. The top model on this release was the E 63 AMG S 4MATIC. It was a high-performance car; it produced 585 HP and was available as a saloon or wagon with performance-orientated 4MATIC all-wheel drive, with engine torque distribution of 33% to the front axle and 67% to the rear axle.

The standard E-Class sedan is available with two types of diesel and one petrol engine.

Standard passive safety comes in the form of seven airbags, belt force limiters, belt tensioners, active head restraints, and ISOFIX child seat mounts. Other features include the active bonnet which in the event of an accident a spring system lifts the rear of the bonnet by 50 mm within milliseconds, hence increasing the deformation space and improving pedestrian safety. The driver can easily restore the active bonnet after it had triggered, without the need to visit a workshop. Another standard safety feature of the E-Class is the preventive PRE-SAFE® occupant protection system which is instantly activated when the car is in accident-prone surroundings as a precautionary protective measure for the occupants so that airbags and belts could be deployed to their full protection in the event of an accident.
Another standard innovative safety feature is the Attention Assist that detects driver fatigue. It is a system that utilizes highly sensitive sensors that permanently assess more than 70 different parameters relating to the driver’s alertness and warned him/her if there’s any sign of fatigue detected. Other optional safety features in the E-Class include Lane Keeping Assist, Blind Spot Assist, Adaptive High beam Assist, and PRE-SAFE® brakes with autonomous emergency braking.

Mercedes Benz designers and engineers rarely go wrong, and that can be witnessed on the 4th generation E-Class that we covered in detail in this article. The E-Class is a magnificent car robust, fast, luxurious, executive, safe, efficient, economical, and with state-of-the-art interior and technological features. If you feel like treating yourself or someone you care about or love with a good car, then the Mercedes-Benz E-Class will be a great choice. Please visit BE FORWARD and choose from our long list.

ALL MERCEDES-BENZ E-CLASS FOR SALE