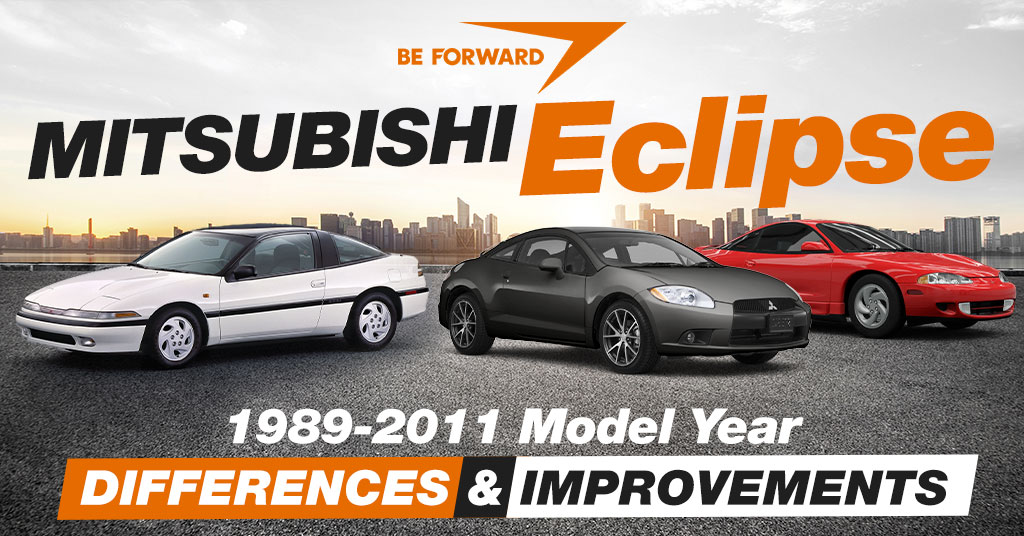 The Mitsubishi Eclipse is a sport compact coupe that was manufactured by the Japanese automotive company Mitsubishi. The Eclipse was introduced in 1989 with its production halted in 2011. Its name was taken from an undefeated 18th-century English racehorse with 26 victories.

Four generations of the Ford Eclipse were produced from 1989 to 2011.

Let’s take a brief look at the journey of the iconic Mitsubishi Eclipse to get a glimpse of how it evolved. Please read on.

The first generation Mitsubishi Eclipse was unveiled in 1989 for the 1990 model year. The Eclipse was available in Base, GS, GS DOHC, GS DOHC AWD, GS Turbo, and GSX trims.

The 1990 Eclipse was a fashionably styled sporty coupe. Its front features pop-up headlights and a thin strip of parking and signal lights. The bumper is thick with air intake vents at the center and fogs lights on each end depending on trim. On the sides, a flowing line ran from the front to the rear of the car and a black stripe circled the car. At the rear, the base model comes fitted with a wrap-around spoiler with a high-mounted center stoplight, while the GS comes with a free-standing rear spoiler.

Inside, the Eclipse is fitted with front sports bucket seats and two rear seats that can only be used for carrying small pets or for storage. The dash is rounded and slightly tilted towards the driver. The instrument cluster contains two large round dials for the speedometer and tachometer and three smaller gauges for the coolant temperature, fuel gauge, and oil level. The center console houses two fan vents at the top with round climate control knobs underneath it followed by AM/FM stereo cassette player.

Under the hood, the Mk1 Eclipse came fitted with two engines with differing outputs.

These engines were paired with a 5-speed manual gearbox as standard, with a 4-speed automatic (available on naturally aspirated models) as an option.

The Eclipse came out when the bio-design trend was the thing, and its exterior was a fine example of it. Its styling featured narrow curvy headlights, in place of the pop-up ones used on the previous model, on the sides flowing lines ran across the bodywork, and at the rear, it featured a sloped tailgate, sharp-angled rear side windows and taillights.

In 1996, a convertible model was introduced to the Eclipse lineup and was named the Eclipse Spyder. The Spyder was offered in two trims; the GS and the GS-T.

Inside, the Eclipse is fitted with front bucket seats and a bench for two at the rear that can only be used for storage or handling a child seat without a child. Its rounded dashboard is simple, nice, neat, and slightly tilted toward the driver. The instrument panel contains two big and round dials for the speedometer and tachometer and two smaller gauges for the fuel and coolant temperature. The center console houses two fan vents at the top followed by climate control knobs and a car stereo beneath the knobs. Between the front seats, there is a covered deep bin that functions as a hand rest as well with the transfer shift just ahead.

A turbocharged engine used on the previous model was still used but with more power. It now produced 210 hp and was fitted on the Spyder GS-T and the GSX all-wheel-drive. This engine clocked 7-seconds to accelerate from 0-100 kph, while the turbocharged front-wheel drive was even quicker. These engines were mated with either a four-speed automatic or five-speed manual transmission.

The third-generation Mitsubishi Eclipse was unveiled in 1999 for the 2000 model year. The 2000 Eclipse had its body, interior, and chassis completely redesigned. The 2000 Eclipse is available in RS, GS, GS Spyder, GT, GT Spyder, GTS, and GTS Spyder trims. The GSX AWD is no longer available.

On the outside, the third generation Eclipse was noticeably bigger and softer than the outgoing model. Its front looks lost its aggressiveness. It featured rounded headlights spread along the corners flanked by a curved hood and without a bulge. The bumper still held the sporty character and above it was the trapezoidal grille in the apron. On the sides, the Eclipse has a slightly ascending beltline and the greenhouse is curvy, while at the rear end the presence of a large spoiler is evident.

Inside, the Eclipse is a 4-seat sports car. The front bucket seats are comfortable and supportive, while the rear seats are still useless due to their limited space. Folding the rear seats down expands the cargo area, but this is not the case for GT Spyder, as the boot is taken by the folding roof. The styling and finishing of the cabin were done with soft vinyl and nice and neat plastics. In general, the car was very well composed, giving it a luxurious feel.

The fourth-generation Mitsubishi Eclipse was unveiled in 2004 for the 2005 model year. The 2005 Eclipse featured a redesigned sportier look that borrowed some styling cues from the second generation model but with a front fascia that followed Mitsubishi‘s current corporate styling features. The 2005 Eclipse is available in GS, GT, and GTS trim.

Inside, the Eclipse featured a plain and simple cockpit. The dash was made of plastic throughout, while the instrument panel has two large dials for the speedometer and tachometer and two small gauges for fuel and coolant temperature. The front seats are comfortable and ample but do not offer enough side support. Atop the center console sits a clock, while at the center you find a 140-watt AM/FM/CD/MP3 player with six speakers while the GTS comes fitted with a premium  650-watt Rockford Fosgate audio system. With a 6-CD in-dash changer, nine speakers including a 10-inch trunk-mounted subwoofer, and steering-wheel-mounted audio controls.

The Eclipse received some upgrades in 2008 for the 2009 model year. Most of the changes were cosmetic, starting from the front fascia which saw the removal of the triangle that held in place the “three diamond” insignia on the grille; the rear was touched too, the “Eclipse” emblem changed to silver letters. Dual exhausts and projector H.I.D. headlamps were available as options. The V6 engine gained 2 hp and was rated at 265 hp to some extent due to the more open front fascia together with a new stock dual exhaust system.

Like the 1990 model, the 2011 Eclipse featured a “blackout” roof. A rearview camera and Bluetooth hands-free calling were options.

Built by one of the Japanese automotive powerhouse, the Mitsubishi Eclipse was a car with a price tag that opened the sports car world to the masses. Like most Japanese cars, the Eclipse was reliable, robust, durable, and dependable.

We have reviewed four iterations of the Ecplipse, with each having its pros and cons as listed.

Please visit BE FORWARD and check out our list of used Mitsubishi Eclipse on sale.