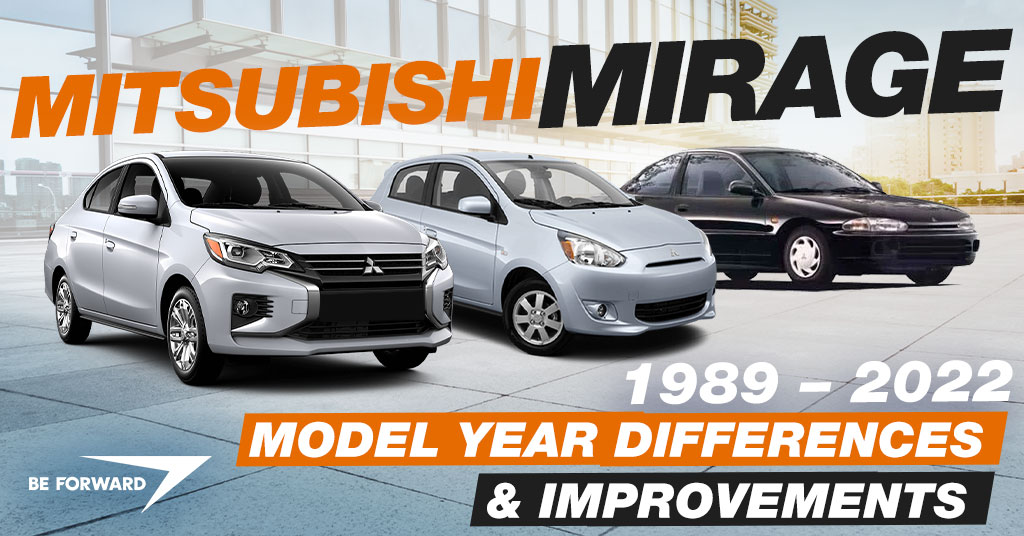 The Mitsubishi Mirage (Colt) is a car brand produced by the Japanese automotive manufacturer Mitsubishi from 1978 to 2003 when production was halted and later resumed in 2012. The Mirage was available in hatchback, sedan, station wagon, coupe, and liftback body styles. The liftback model whose production ran from 1978 and 2003, and the coupe introduced in 1991 were classified as subcompact cars, while the sedan and wagon models were marketed as the Mitsubishi Lancer, and the liftback model introduced in 1988 were classified as compact cars. The current Mirage model introduced in 2012 is sold as a subcompact hatchback.

Here we are going to briefly walk you through the evolution of the Mirage from 1978 to the present. Please follow through.

The first generation Mitsubishi Mirage (Colt) was unveiled in March 1978 as a three- or five-door hatchback in March 1978, like a car with greater conservation and better fuel efficiency in response to the 1973 oil crisis.

Like most cars of the ’70s, the Mirage was very basic. The exterior features a stable trapezoidal shape, a slanted front end with a simple radiator grille insert made up of several horizontal sluts flanked by rectangular headlights slightly immersed, and a plastic bumper fitted with a combination of parking and signal light on either end.  On the sides, the flush surface panels are decorated by a black plastic strip and small-signal lights at the front tips of the fender panels.

In February 1982, a facelifted model of the  Mitsubishi Mirage model range was released. New features included headlights that are flush with the new grille insert and extend into the fender panels. At the rear, the Mirage was fitted with much larger taillights.

Inside, the dashboard was upgraded as well, it came fitted with rotary switches for wiper and light functions mounted a fingertip away.

Concurrent with the facelift, Mitsubishi introduced four-door sedan variants for the Japanese market that were known as Mirage Saloon and Lancer Fiore. The rear seats of the sedan had a 60/40 split-fold feature.

The 1978 Mirage was powered by either a 1.2-liter or 1.4-liter petrol engine with 71 hp and 80 hp respectively. A 1.6-liter petrol engine with 86 hp was later added to the lineup. The 1.4-liter variant features a “modulated displacement” system that has the capability to shut down cylinders while cruising or idling to reduce fuel consumption. From 1982 a turbocharged version of the 1.4-liter 4-cylinder engine with 103 hp was available. These engines were mated with either a 3-speed automatic, 5-speed manual, or the debutant four-speed manual Super Shift transmission with a “low” and “high” range; that made the transmission an eight-speed unit with front-wheel-drive as the standard and only drivetrain.

The second generation of the Mitsubishi Mirage was unveiled in 1983 as a three- or five-door hatchback and a four-door sedan (Lancer Fiore). Later in 1985 and 1986 a five-door Mirage wagon and a four-wheel-drive wagon were released respectively.

The Mirage hatchback was sold in most export markets as Mirage or Colt, while the sedan and wagon were sold as Lancer. This wagon was well received in most markets the, with the C10-series and C30-series wagon numbers denoting FWD and 4WD respectively.

The 1983 Mirage came fitted with either a 1.3- or 1.5-liter 4-cylinder petrol engine with 77 hp and 85 hp. Optional variants were 1.6- and 1.8-liter 4-cylinder petrol engines with 103 hp and 124 hp respectively, and a 1.8-liter 4-cylinder diesel with 60 hp. These engines like in the previous model were mated with either a 3-speed automatic, 5-speed manual, or four-speed manual Super Shift transmission with a “low” and “high” range; that made the transmission an eight-speed unit with front-wheel-drive as the standard and only drivetrain.

The front fascia features narrow headlights, swept-back signal lights, a flush, narrow, and black grille, and a wrapped-around body-colored plastic bumper decorated with a black rubber strip on its upper section. Underneath the bumper is an apron with a large air intake at the center and on the sides. On the sides, the hatchback has wide doors with large glass areas that run from the B-pillar to the raked-forward C-pillar.

Inside, you are met with a flat dashboard with a raised instrument panel enclosure in front of the driver. The bolstered front bucket seats offer significant support for the front passengers, while in the rear, it comes with a split-folding seat that can accommodate two passengers.

The fourth generation of the Mitsubishi Mirage (Colt) was unveiled in 1991 for the 1992 model year. The 1992 Mirage embraced a much curvier body shape. The 1992 Mirage was available as a three-door hatchback (Mirage Cyborg), a six-window sedan, and a coupé. In mid-1992 a four-windowed sedan and a station wagon (Mitsubishi Libero) joined the lineup.

The 1992 Mirage has a tapered hood, its facial features oval headlights with a narrow single-port grille. The Lancer branded model’s styling was more angular and upright, with re-shaped fenders, boxy headlamps, and a dual-port grille.

The fifth generation of the Mitsubishi Mirage (Colt) was unveiled in 1995 for the 1996 model year. It was available as a three-door hatchback, sedan, or a two-door coupé (Asti). No wagon was offered with this generation, although Mitsubishi continued to offer the previous generation wagon on this generation.

The exterior styling didn’t change much compared to the outgoing model except for the sedan that featured amber front turn signal lights, a new trunk lid, and a restyled front grille garnish.

In 1997, the Mirage received a minor facelift with several cosmetic changes. The most significant on the Lancer sedan is a new grille and reshaped interior of the headlights to set it apart from the core Mirage model, while both the sedan and coupé featured redesigned taillights. The three-door hatchback featured a redesigned front bumper with a larger air intake vent. A classically designed three-door hatchback was released in Japan in Japan, named Mirage Modarc. It featured a chrome grille, bumper strips, door handles, and side mirrors; it also had fog lights with alloy wheels as an option.

Under the hood, the 1996 Mirage came with numerous optional naturally aspirated and turbocharged engines. Most of the previously used engines were carried over with some tuning. The standard engine was the 1.5-liter 4-cylinder petrol engine (4G15) with 109 hp. These engines were mated with a 4-speed automatic or 5-speed manual transmission.

The sixth generation of the Mitsubishi Mirage (Colt) hatchback was unveiled in 2012 and the sedan in 2013.

In planning and designing the 2013 Mirage, Mitsubishi focused on producing an affordable and highly efficient car. To attain this, they focused on minimizing the vehicle’s weight and reducing aerodynamic drag. In order to attain the weight loss, they made use of high-tensile steel in the body and were rewarded with a car that was very light (the lightest in its segment in some markets). They also succeeded in reducing aerodynamic drag by registering a drag coefficient between 0.27 and 0.31, with one of the car’s aerodynamic technologies registered as a new patent.

The 2012 Mirage/Colt is not very good-looking, but the interior is where it impresses the most. The cabin has plenty of headroom and legroom and enough space to comfortably accommodate four adults. The cargo area is a bit limited, but the split-folding seats can add that extra needed room.

The dash has some large and easy-to-use buttons and the driver’s seat and steering wheel are height-adjustable. Standard features on the 2012 Mirage are pretty decent, too. They include an MP3-compatible CD player, electric windows, and keyless entry.

The Mirage was upgraded in 2017. Most of the changes were cosmetic, which included a new front-end design, the introduction of projector headlights with LED DRLs, and LED taillights. The upgrade improved the car’s drag coefficient to 0.27cd. The engine was tuned as well which improve its output, the suspension system was fitted with better shock absorbers, and the brakes were uprated.

The Mirage received the second upgrade in 2019 for the 2020 model year. Revised features include a new bumper design that bears Mitsubishi’s current design language, new projector headlights with DRL, and LED inlets for the taillights.

Here we briefly dissected the Mitsubishi Mirage/Colt in trying to share some ins and outs of the car. We hope that this helps you learn more about how the car has evolved and that it will guide you to choose a reliable and comfortable Mirage/Colt that will well. But also hope that it enlightens you on the changes that have been made to vehicles by the manufacturer over the years.

From this review, we conclude that the Mitsubishi Colt is cheap to own and run, but it’s also reliable, durable, practical, and fun to drive.

Please visit BE FORWARD and check out our stock of 100+ used Mitsubishi Mirage listed for sale.