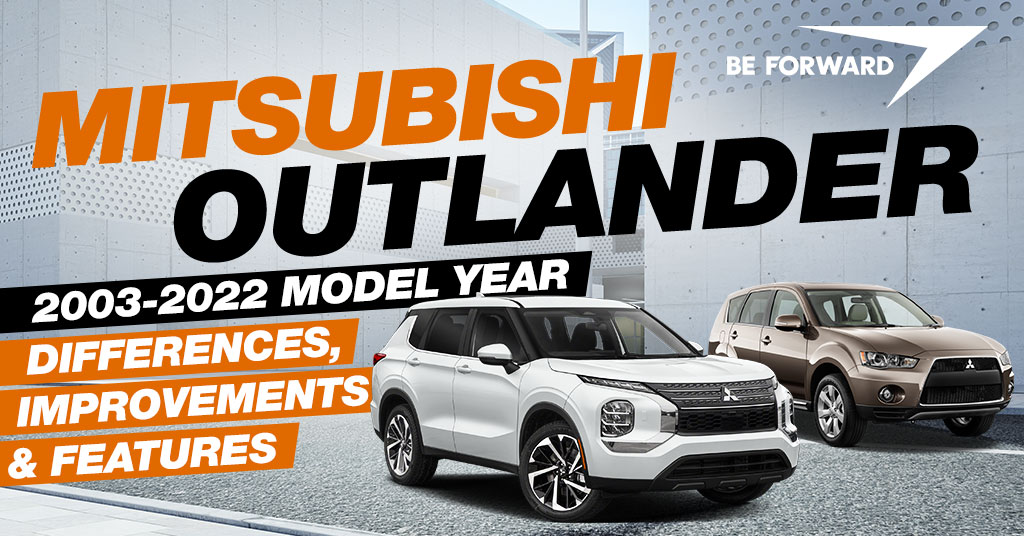 The Outlander is Mitsubishi’s premium on-road SUV, designed with comfort, utility, and drivability in mind. It was a fan favorite as soon as it was first announced in 2005. Additionally, new generations have become lighter and more fuel-efficient while combining environmental friendliness with impeccable driving performance. Over the years, Mitsubishi has continued to improve everything else safety features, interior, comfort, and cargo.

But just how has it changed over the generation? Which generation works best for your needs?

The 1st generation Outlander is known as Mitsubishi Airtrek and was based on the Mitsubishi ASX concept vehicle exhibited at the 2001 North American International Auto Show. The Active Sports Crossover (ASX) represented Mitsubishi‘s approach to the industry-wide crossover SUV trend for retaining the all-season and off-road abilities offered by a high ground clearance and 4WD, while still offering car-like economy, size, and levels of emissions.

On 20 June 2001, the Airtrek was first introduced to the Japanese market and was sold at Mitsubishi Japan dealership chain called Car Plaza

The 1st generation was available in both front- and four-wheel drive. The 4WD model uses open differentials for the rear and front axles, with a viscous coupling unit for the center differential.

The Euro NCAP car safety performance assessment programme rated a 4-star rating the Outlander, which features Mitsubishi‘s RISE safety body. Something a Mitsubishi calls a “Flap-Fold Tailgate” is one of its unique features.

The top-end Outlander XLS (GT in the US) along with a major facelift for the 2010 model year introduced the Mitsubishi S-AWC AWD system and a new color multi-function display. The lower grades hold the less advanced AWC AWD system and the previous MFD. Likewise; the interior was also slightly reviewed to incorporate leather into the doors and dashboard trim.

At the 2012 Geneva Motor Show Mitsubishi launched the 3rd generation Outlander. The 3rd generation redesigned model has a new lightweight body that weighs approximately 90 kg less than the previous model due to extensive use of high tensile strength steel. Inside, there is good sound insulation and the front doors and dashboard are covered with soft-touch material while the seats are redesigned.

Most Mitsubishi Outlander‘s 3rd generation came with several safety features as standard which include front-seat side and side-curtain airbags, stability and traction control systems, anti-roll bars in both the front and rear and anti-lock braking systems.

Inside, it features numerous excellent modern entertainment options as well, including full in-stereo navigation, an internal server with over 40 gigabytes of memory, and a back-seat entertainment system. Depending on the model the 3rd generation Outlander has an average fuel economy between 7.0Km/L to 16.0 km/L.

Mitsubishi debuted a heavily revised Outlander for the 2016 model year at the 2015 New York International Auto Show the vehicle is powered by a new design language called “Dynamic Shield”. The new headlights now include LED DRLs with the option of full-LED headlights. Inside the cabin, Mitsubishi made improvements to the headliner, steering wheel, door controls, and rear folding seats.

The upgraded Outlander has somewhat reduced cabin noise via thicker door glass, increased use of sound insulation, differential dampers, and thicker weather stripping and dynamic suspension. The steering and suspension are a new generation Jatco CVT8 transmission and re-tuned for 4-cylinder models.

The 3rd generation includes a plug-in hybrid variant, and its production version was launched at the 2012 Paris Motor Show. This version is called PHEV.

Inside the 4th generation, Outlander is powered by new interior features including a 12.3-inch digital instrument cluster and a head-up display, and a 9.0-inch infotainment system with wireless Apple CarPlay

Its standard 3-row seating is atypical of the segment, too, but it’s almost useless. The Outlander shares a mechanical platform and bits with the new Nissan Rogue, including an unremarkable 181-hp four-cylinder powertrain.

Its interior is also much better quality, with elegantly significantly nicer materials and a simple design. Plus, there’s driver-assistance technology and an assortment of new connectivity features. A PHEV (plug-in hybrid model) will eventually join the lineup, too.

Along with a larger electric motor and more battery capacity than its forerunner from the previous generation, the Outlander with a plug will now be compatible with a 3rd row, which wasn’t available before.

The 2022 Outlander is driven by a 2.5L I4 cylinder engine that generates 181 pound-feet of torque and 181 hp. It couples exclusively with a CVT (continuously variable automatic transmission). All-wheel drive is optional, but the front-wheel drive is the standard configuration.

The 2022 Outlander has meaningfully nicer cabin materials compared with its forerunner, which was marred by chintzy trim pieces and subpar plastics. The design finally qualifies as modern and the interior accents and surfaces are of higher quality.

There’s a head-up display and an assortment of contemporary content that includes an available 12.3-inch digital gauge cluster. The passengers in the first 2 rows enjoy extra legroom and hip room than in the last-gen Outlander, its 3rd row apparently isn’t made for people with legs.

The new 2022 Outlander cargo space also increases by 1 cubic foot to the total volume behind the 2nd and 3rd rows.

The new Outlander comes fitted with either an 8.0- or 9.0-inch touchscreen, depending on the trim. Both units installed standard Android Auto and Apple CarPlay.

The system features hard buttons and physical knobs for volume and tuning along with charging ports at the bottom of the center stack. Extra available infotainment features include a 10-speaker Bose audio system, access to the subscription-based Mitsubishi Connect app that provides remote services, and wireless device charging.

According to EPA, the 2022 Outlander has lower fuel-economy ratings. An AWD Outlander is rated at 10.2 Km/L cities and 12.7 Km/L highways.

The Mitsubishi Outlander is a car that has won people’s hearts, but the 2022 model PHEV won more than the petrol model. When Mitsubishi released the Outlander PHEV, its competitors had to play catchup, and the model was ahead of its time As the push for plug-in hybrid intensifies, the PHEV is even more relevant than at any other time. The petrol version also has a reasonable share of fans due to the amount of space it offers and the 7 seats. The 4×4 drive train and good ground clearance make it even better. Apart from the powertrains, the Mitsubishi Outlander is really a decent and thrilling all-around package. Find out by looking at key generation with the help of BE FORWARD.