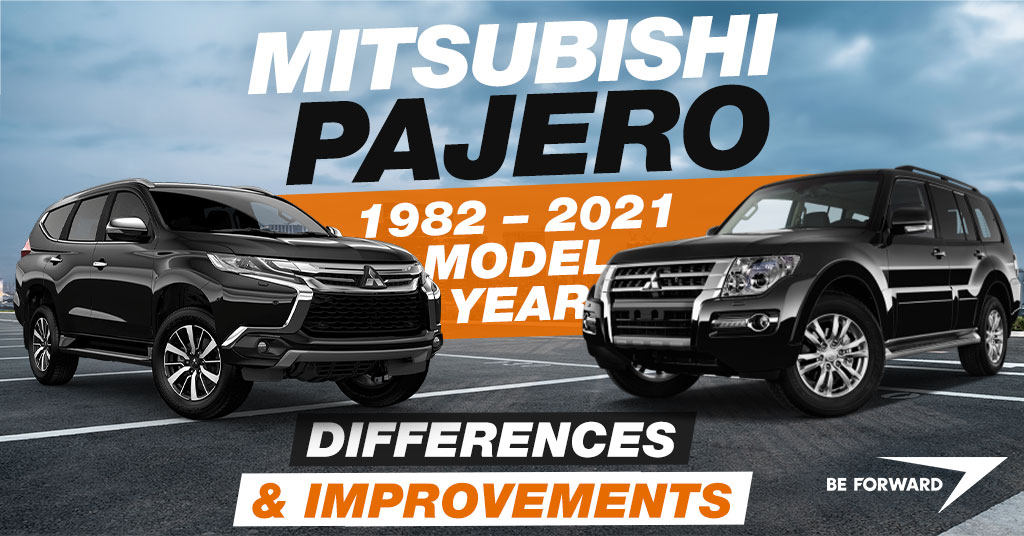 The Mitsubishi Pajero/Montero/Shogun is a full-size SUV produced and marketed by the Japanese automotive manufacturer Mitsubishi Motors. The Pajero was introduced in 1981 and has spanned four generations until it was discontinued in 2021.

The Pajero built its reputation for notoriety by winning the harsh Paris-Dakar Rally 12 times. The street version also built a reputation for durability, reliability, and efficiency in its category.

Let’s take a brief look at the forty good years of the Pajero. Please follow through.

The first generation Mitsubishi Pajero was unveiled in 1981 for the 1982 model year. Initially, the Pajero was available as a three-door, short-wheelbase SUV with a soft canvas top or hardtop.

Features on the 1982 Pajero included power steering, suspension seats, a turbocharged diesel engine, and a front double wishbone suspension with torsion bar springs which were uncommon in a four-wheel-drive vehicle.

In 1983 a long-wheelbase, five-door Pajero model was introduced. This model increased the SUVs seating capacity to seven, which included the provision of third-row seats, that could be folded to the sides to increase cargo room or configured in combination with second-row seats to create a bed. The Pajero was available in a Semi-High Roof or High Roof body style as standard.

The initial short wheel-base Pajero was offered in three optional engines, with other engines added later, with the most powerful 3.0-liter V6 as the top range. In 1983, more engines were introduced coinciding with the introduction of the long-wheelbase model. The engines include a turbocharged 2.0-liter petrol and a turbocharged 2.3-liter diesel. Export markets added a 2.6-liter petrol 4-cylinder with a 102 hp.

In 1984 turbo diesel engines with higher power and torque ratings were introduced to the lineup.

From 1988, the 2.5-liter turbo diesel and the 3.0-liter V6 engine were made available across the range, with the 2.5-liter engine fitted with the first intercooler on a 4×4.

Engines offered on the first generation Pajero include the 2.6-liter 4-cylinder with 110 hp, the 3.0-liter V6 engine with 139 hp, and the turbocharged 2.5-liter 4-cylinder diesel with 83 hp or 94 hp with an intercooler. Part-time four-wheel-drive was standard on all models.

The second-generation Mitsubishi Pajero was unveiled in 1991. It was completely redesigned with new and enhanced features. The 1991 Pajero had a larger body compared to its predecessor, and was available in four optional body styles which were; Semi High Roof Wagon, High Roof Wagon (long wheelbase), Metal Top, and Canvas Top Convertible (short wheelbase).

The 1992 Pajero had a flat front fascia made up of a slightly tilted grille with three horizontal slats (chrome or black depending on the trim level) flanked by a set of big square headlights with turn signals and parking lights mounted on the corner. Underneath is a bumper wrapped in plastic around the corners with the plastic running to the rear of the car via the sides-by-side moldings to the beefy wheel arches then the door panels and eventually to the car’s back. At the rear, the side-hinged tailgate holds the spare wheel.

Inside, the cabin is spacious with the LWB model capable of accommodating seven passengers comfortably in three rows, although the third row has limited legroom. The interior is treated with a cloth or leather-clad upholstery depending on the trim. Its angularly-tilted dash comes with an instrument panel above the center stack and another one in front of the driver. The one placed at the center has an altimeter, a compass, and a display of the car’s pitch and roll angle, while the one in front of the driver displays speed, rpm, fuel level, coolant temperature, and engine status.

The 1991 Pajero came with an upgraded Super Select transmission, that enabled the driver to select either rear-wheel drive which was standard, or all-wheel-drive with three differentials.  A center differential lock and a two-speed transfer case were standard on all Pajero models.

The third-generation Mitsubishi Pajero was unveiled in 1999 for the 2000 model year. Unlike the previous two generations built on a body-on-frame chassis, the third generation came with a unibody frame which helped improve the car’s comfort. It was still offered in short-wheelbase and long-wheelbase configurations.

The 2000 Pajero’s exterior is curvy compared to the boxy third generation it replaced. The dimensions of the car grew several inches, this helped improve the interior room as well. Its facial features a new body-colored or chrome grille flanked by large square headlights. On the sides, it is fitted with a blind spot mirror at the top of the left fender, flared wheel arches, and side steps. At the top roof rails are standard.

Inside, the 2000 Pajero is more spacious than its predecessor, it is a seven-seat car in a 2-3-2 seat configuration. The dashboard is nicely laid out, and the gauges are clear. Atop the center stack, there is a small LCD screen that displays the temperature, time, and a compass among other things. Its followed by a double DIN audio system and climate control dials, as well as two cup-holders and a large two-level center console.
The front and second-row seats are comfortable and supportive, with enough legroom. The second-row seats can split-fold in a 60/40 configuration, while the third-row seats offer limited legroom but can be stowed away or removed for extra cargo space.

Depending on the market, the Pajero was offered with a choice of fuel-efficient diesel engines or V-6 petrol engines. Previously used engines were also used with improved power. They include the 3.0-liter V6 with 170 hp and the 3.5-liter V6 with 217 hp petrol engines, while the 2.8-liter diesel now produced 160 hp. The 3.8 liter V6 (6G75) petrol with 240 hp and the 3.2-liter 4-cylinder (4M41) with 168 hp were the newly introduced engines. These engines were mated with either a four- or five-speed automatic, or five-speed manual transmission.

The fourth-generation Mitsubishi Pajero was unveiled in 2006 for the 2007 model year. Like its predecessor, it was built on a unibody construction and an integrated ladder frame chassis.

The exterior of the 2007 Pajero was signified by a facial made of a three-slat chromed grille and bigger and taller HID headlights. At the top of the car was a sloped roofline with roof rails, and flared wheel arches on the sides. It was offered in a 3- (SWB), and 5-door (LWB) version. The three-door has 5-seats only while the five-door was fitted with 7 seats. The spare tire is still placed on the rear tailgate.

The interior of the Pajero looked more modern, it featured a newly designed dashboard, with a much bigger and clearer instrument cluster. Like in the previous model, the center stack housed the infotainment system and a slightly bigger LCD display compared to the outgoing model used for the onboard computer. The cabin is spacious, it offers plenty of room on the front and middle row seats, with the mid-row seats capable of comfortably accommodating three adults. The third-row seats have limited space.

The Pajero’s 4×4 system caught much attention. Like in the previous models, it featured an all-wheel-drive system with three differentials, but this time it was upgraded into an on-demand 4WD system that can function as an AWD system with the rear and central differentials locked for better traction.

Under the hood, the 2007 Pajero came fitted with a turbocharged 3.2-liter 4-cylinder diesel with 168 hp or the 3.8-liter V6 petrol engine with 247 hp. These engines were mated with either a 5-speed manual or 5-speed automatic transmission.

The Mitsubishi Pajero has been around for about 40 years, not many cars make it this far, but the Pajero did and it did deservedly. The Pajero has been one of the outstanding 4×4 SUVs for many years, it is a true off-roader that is reliable, durable, and practical.

If you are in the market for a 4×4 the Pajero will be a great choice. At BE FORWARD we have a list of 200+ used Mitsubishi Pajero’s listed for sale. Please visit our site and choose your next car.