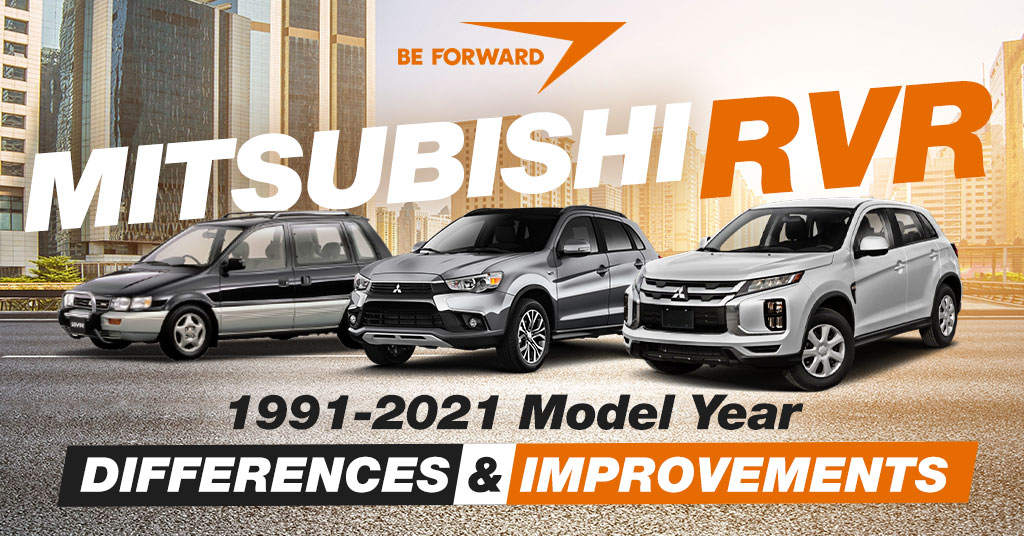 Mitsubishi RVR is a car manufactured by the Japanese automotive company Mitsubishi from 1991 to the present.

In this article, we will take a brief look at the evolution of the Mitsubishi RVR to gather some insights. Please follow through.

The N10/N20 RVR has a tall wagon body with two front doors, a passenger-side sliding door, and a rear tailgate. The RVR has low step-in and step-out height for ease of ingressing and egressing. Some models come with side steps

The interior of the N10/N20 RVR is spacious. Its interior styling features five seats arranged in two rows. The rear seats can be reconfigured into

The RVR came fitted with a base 1.8-liter (4G93) DOHC 16-valve inline-4 petrol engine with 113hp. This engine is mated to either a 4-speed automatic or a 5-speed manual with a 4WD drivetrain as an option.

In 1997 Mitsubishi released the second generation of the RVR (N60/N70) which was almost similar to the first with several upgrades.

The interior of the N60/N70 RVR is slightly more spacious than that of the N10/N20 RVR which is a result of improved external dimensions. The seats are comfortable and supportive, with the front seats having armrests. The is enough head, shoulder, and legroom for all occupants, with enough room for luggage remaining at the rear.

The third-generation Mitsubishi (GA/XA/XB/XC/XD) RVR also known as Mitsubishi ASX or Outlander Sports in other markets is a subcompact crossover SUV manufactured by Mitsubishi Motors since 2010.

The 2010 RVR’s facial features a trapezoidal grille and angular headlights similar to those fitted on the Mitsubishi Lancer, but unlike the Lancer this car is taller. The GA RVR is a short vehicle with proper SUV traits, and this is what enabled it to win the Paris – Dakar rally and World Rally Championship.

Its interior is a mixture of both car-like and off-road features. The dash is neat, its center console consists of a radio and three round temperature control dials, while the instrument cluster consists of two round meters with a small LCD in between them. This car comes with five comfortable and supportive seats, with a small transmission tunnel that does not hinder interior space creating enough head, leg, foot, and shoulder room for all passengers. The cargo area is large and can be extended by folding flat the rear seats.

The RVR is offered with the option of six petrol engines and three turbocharged diesel engines. The base engine is the 1.8-liter (4B10) inline-4 petrol engine with 140hp and 127 lb-ft. These engines are mated with either a 5 or 6-speed manual, 6-speed automatic, and 6-speed INVECS III CVT transmission.

In 2012 Mitsubishi introduced a refreshed RVR in trying to have a grip on the small crossover market.

This release featured several cosmetic changes which included a newly designed bumper, reshaped fog lights that gave the car sportier looks, and a lower apron with a broader opening. Unlike the 2010 model which had a trapezoidal grille, this model’s grille is A-shaped with a 3D pattern mesh and xenon headlights on either side. Another change is 18″ alloy wheels became standard for the 2013 model.

Interior changes included a Lancer-Evo-inspired steering wheel with aluminum accents. Some automatic transmission models were fitted with paddle shifters located behind the steering wheel. All models came fitted with an infotainment system but for the base model, it was optional.

The same engines used on the 2010 model continued being used.

In 2016 Mitsubishi implemented another facelift on the RVR in trying to entice buyers and improve the car’s appeal.

Exterior upgrades include a new front fascia fitted with a meshy black grille surrounded by chrome trim with the three-diamond symbol moved to the bonnet, an entirely different bumper, and side scoops that host the fog lights.

The interior received some upgrades such as a 6.1-inch touchscreen infotainment system, central air vents surrounded by satin-silver trim and a piano-black panel, and upholstery options, which include diamond-stitched seats. The rear seat split-fold in a 60/40 configuration which increases the luggage area from 393 liters to a maximum of 1143 liters.

Under the hood, the same engines that were previously used were used.

The evolution of the RVR continued in 2019 when Mitsubishi released another upgraded model.

The 2019 RVR’s exterior is now more stronger and robust than the 2016 model and has a lightweight body. The front and rear of the car were refreshed, with the front fascia getting restyled headlights, a prominent grille, and LED daytime running lights were introduced. The rear comes with new signature LED taillights.

Interior upgrades include a 7.0 inch (2019 model) and 8.0-inch (2020 model) touchscreen infotainment system. The seats are comfortable and are covered with cloth upholstery as standard with leather as an option.

Under the hood, the engines offered remain the same with minor tweaks.

The RVR began its journey into the car world as an MPV and did very well, and later transformed into a subcompact crossover SUV and still did very well. Here we took a look at some of the features that are found in these cars. The RVR is a safe, robust, efficient, and reliable car which is a trait that accompanies most Mitsubishi brands.

Please visit BE FORWARD and check out our list of our used Mitsubishi RVR on sale.