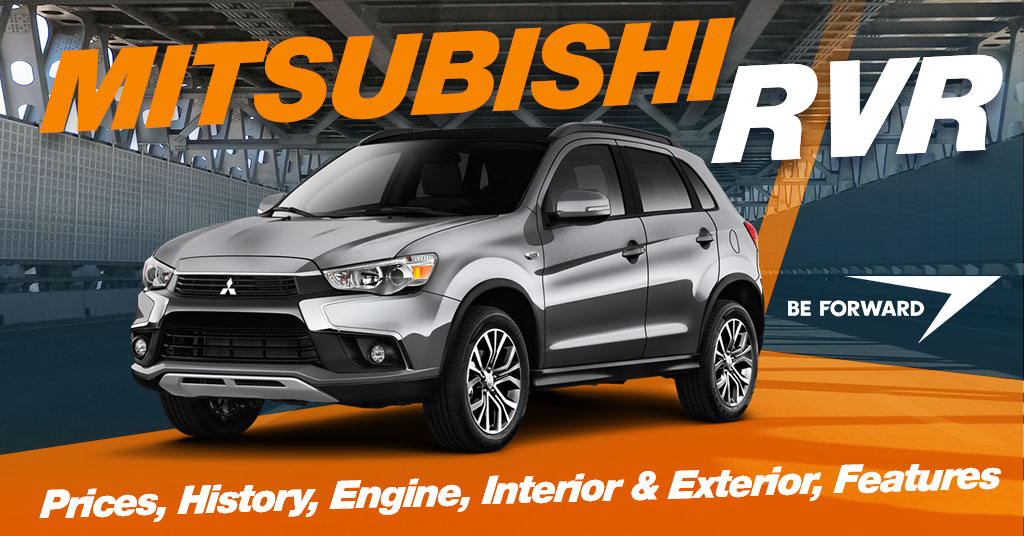 RVR stands for “Recreation Vehicle Runner”. With a youth-oriented approach, it had a convenient size passenger cabin and spacious 4–5 seating capacity, making it attractive to the young generation. The Bugs Bunny and Daffy Duck as spokespeople were used in a TV commercial in Japan. Also developed and released during Japan’s “bubble economy”, and became so popular due to the convenience of a passenger-side sliding door.

Mitsubishi introduced the 3rd generation RVR in early 2010 also known as Mitsubishi ASX in other markets.

RVR Grades:
For the JDM the 2010 RVR was offered in two trims, the M and G trim levels. G features more options.

Mitsubishi RVR E – This is the standard grade that is fitted with 16-Inch steel rims, Keystart, DVD/CD player with USB and Bluetooth, and is available in both 2WD and 4WD.

Mitsubishi RVR M – This is the middle grade that is fitted with Navigation/Entertainment system with USB and Bluetooth, 16-Inch steel rims, smart start, optional paddle shift, optional cruise control, optional Leather-trimmed steering wheel, and gear knob, and is available in 2WD and 4WD.

The interior of the RVR is spacious and can comfortably accommodate 5 seated adults. The boot is 419 liters with an underfloor storage area suitable for wet and dirty items and more space can be gained by folding the rear seats flat. The dash features two round dials and between them, there is a 7-inch widescreen display, a leather-covered steering wheel that can be angle tilted and has audio controls, leather-wrapped gear knob, hands–free communication functionality, storage space near the instrument panel, passenger seat glove compartment, console box between the front seats, a Mitsubishi Multi-communication System (MMCS), a rearview camera, and a Rockford Fosgate audio system on some trims. In some variants, you will enjoy Navigation, Reverse camera, USB Charging, and Bluetooth.

The Mitsubishi RVR has got the same sporty look that we like and closely resembles the Outlander. Lower grades fitted with steel rims with plastic covers. If possible try to upgrade from steel rims to alloy rims as they improve performance and appear better.

Underneath the RVR is equipped with MacPherson strut front suspension and at the rear, it features a multi-link rear suspension. The wheelbase is 267 cm which gives the car a comfortable interior and stability.

The RVR features as standard the Emergency Stop Signal system (ESS), a system that blinks hazard lights in case of a sudden stop to alert oncoming drivers. The RVR is also fitted with adjustable force-limiter seat belts, SRS knee airbags for the driver, and side and curtain airbags.

An electric power steering system that is fitted in RVR makes it accurate and reliable to drive. There is somebody rolling around corners at higher speeds but not a concern for normal driving. For better handling, you go for 4WD options thanks to an electronic system that tailors traction to the wheels based on driving conditions. The driver also has the option of choosing 3 driving modes – 2 wheel drive, 4 wheel drive AUTO, and 4 wheel drive lock.

With a good ground clearance of 7.6 Inches, it easily clears road obstacles and speed bumps even when fully loaded and the RVR is good for both on-road and off-road driving.

The Mitsubishi RVR is a good family car with top safety ratings and top reliability. The feedback from users so far is positive even though it’s still new in this market. The 4WD models are the best for off-road driving. The asking prices are reasonable and affordable so if you are looking for the best deal you can get in touch with BE FORWARD. The price starts from USD 3,820. We guarantee you a pleasant experience and safety.