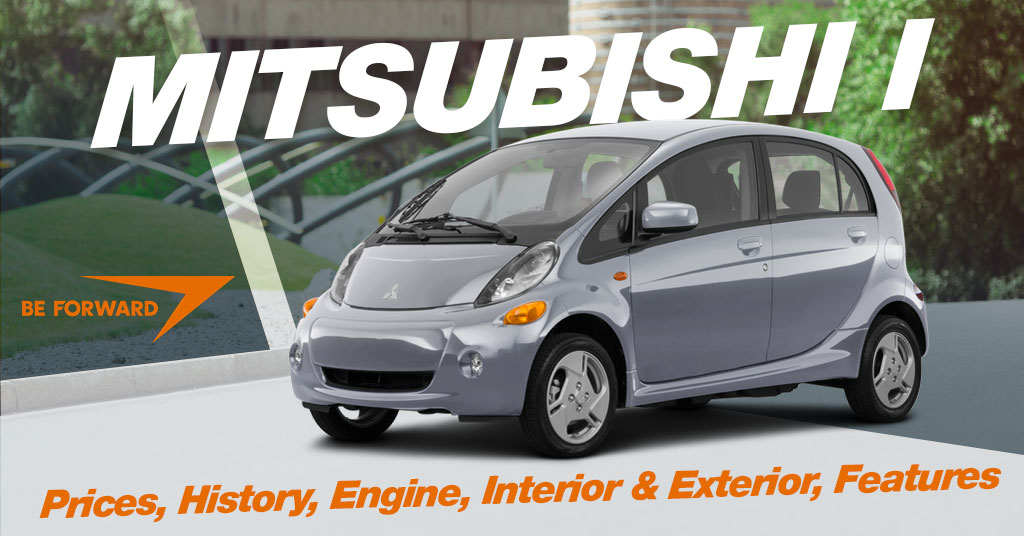 Mitsubishi i is a five-door, four-passenger hatchback car that falls in the Japanese Kei category produced by Mitsubishi Motors since 2006 and also won the Japanese car of the year in the same year. Mitsubishi i is a compact car and was specifically built for urban use with some unique styling. The “i” is really great to drive around urban spaces and due to its narrowness; it can be easily parked in the tightest of parking spaces.

The state-of-the-art layout and designing of the i proved a direct commercial and critical success, exceeding Mitsubishi’s initial sales targets by 20% and winning 13 awards in its first year. Although designed with the Japanese keijidōsha light automobile class in mind, the attention it generated led to its following introduction in right hand drive markets in Oceania, Europe and Asia. It is also used as a base of the 2009 i-MiEV battery electric vehicle.

The i’s boot space is not that big, but it’s big enough to fit a couple of shopping bags. With seats folded flat, you get a decent amount of luggage space. The i’s glove compartment has some space that can accommodate small goods. Boot with seats folded flat

Mitsubishi i has a length of 339.5 cm, a width of 147.5 cm, and a height of 160 cm. The “i” featured three trim levels namely S, M, and G, G being the one with most features and the most expensive. All these trims were 5-door hatchbacks with a turbocharged engine (prior to the 2007 release); the only major difference was the options and standard equipment.

The i has a “back-midship” engine mounted just ahead of the back axle, a highly unusual set up in a small car where front-engine design has conquered since the 1970s.The 3-cylinder 3B20 powerplant has an aluminium cylinder block, a displacement of 659 cc, and links DOHC (double overhead camshafts) with MIVEC variable valve timing in the cylinder head. Firstly only a turbocharged and intercooled engine was presented, until a naturally aspirated version was introduced for 2007. A 4-speed automatic gearbox transmits power to the back or all 4 wheels, depending on specification.

The “i” featured a light steel structure frame that incorporated the Mitsubishi rear-engine layout. With the engine at the rear, in front of the rear wheels, this enabled “i” to have a wheelbase of 255 cm, and the designers utilized this wheelbase to get maximum cabin space out of it.

Mitsubishi i features a rear-mid engine (RMR) mounted in front of the rear axle, a three-cylinder 0.66-liter 3B20 DOHC MIVEC turbocharged gasoline engine that produces 38 KW (51 HP) at 7000 rpm, and an average consumption of 5.4L/100KM used for the 2006 model. In 2007, “i” models had an option for a naturally aspirated 3B20 DOHC MIVEC gasoline engine. These engines were mated with a 4-speed automatic transmission. Beneath Mitsubishi i is equipped with a three-link De Dion tube/Watt’ linkage suspension system at the rear and the MacPherson struts at the front.

The engine of the Mitsubishi “i” is seen in cutaway, behind the back seats and beneath the floor of the back hatch storage area, just ahead of the back axle.

The Mitsubishi i has many features including entertainment, safety, and other standard features, those features include twin airbags to help to protect the driver and passenger in a front collision. Isofix child seat anchor points, EBD help differ automatically the amount of force useful to each of the wheels, based on loading, road speed, conditions. ABS used to sense ‘locking’ or when a wheel stops moving and starts to slip when a lock-up is noticed. Large crumple zone this refers to a crush zone means areas of vehicle that help the vehicle to deform and crumple in a collision.

Others are a six-speaker CD stereo system, climate control, power windows, and folding power side mirrors.

The Mitsubishi I won the Car of the year award in 2007 from Japanese Automotive Researchers and Journalists Conference and received other two awards from Consumer’s choice and Carview Corporation website.

Also Mitsubishi I has a special achievement award at the 2006-7 after winning the Most Advanced Technology. The style of Mitsubishi I won the Design Awards from the magazines Popeye and Car styling and Japan Automotive Hall of Fame

The price of used Mitsubishi i on our store varies from trim, version, and years of manufactured while prices are reflective of average BE FORWARD prices as of August 2021 starting from USD 1,460.

No, it’s not a large i, don’t compare cheap with bad: The i is actually not awful to drive. Its steering is active, the ride smooth and the brakes firm. It’s relaxed, though, so forget appealing drag races. Inside, there’s room for 4 and there are upscale features like air conditioning and heated front seats. With fuel efficiency, you’ll feel more confident in city driving.

ALL MITSUBISHI I FOR SALE