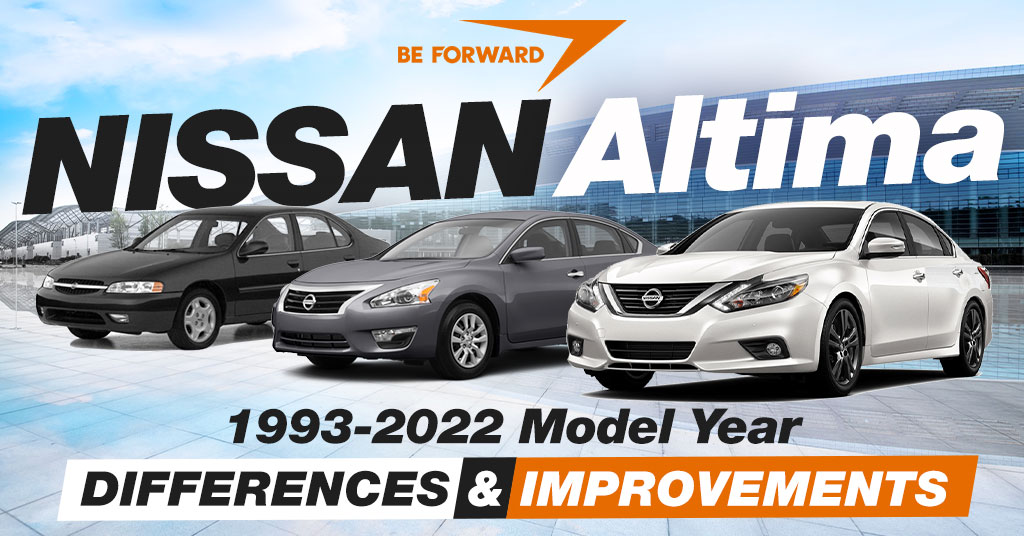 The Nissan Altima is a compact/mid-size car produced and marketed by the Japanese automotive company Nissan since 1992.

The Altima was introduced as a replacement for the Nissan Stanza/Bluebird, with the Altima improving with respect to style and luxury in contrast to its predecessor. The Altima is currently in its sixth generation. The Altima has been a best-seller since its release in 1993.

Let’s take a look at how it has evolved throughout the six generations. Please follow through.

The first-generation Nissan Altima was unveiled in 1992 for the 1993 model year. It was available in four trims starting with the base XE, mid-trim GXE, sporty SE, and luxury GLE.

The 1995 Altima came with a Venetian blind-like grille, redesigned taillights in red and clear, and a 2-leg mount spoiler with a red LED stoplight on the SE trim.

Inside, the Altima came with a rosewood-colored dash and several standard features such as power windows, a digital in-dash clock, a driver’s side airbag, automatic shoulder belts, and an audio system. The SE trim added sports seats and a sunroof, while the GLE added a head-up display that displayed warning lights and speed information on a section of the windshield.

The first-generation model received some updates over the years by replacing amenity features and styling with newer options. Changes included the digital clock becoming on all trims and replacing the rear speaker grilles with a flat rear deck. Other updates included a flush mount passenger airbag, a darker burl wood dashboard trim, and regular 3-point seat belts on the 1994 model.

Under the hood, the 1993 Altima came fitted with a 2.4-liter (KA24DE) 4-cylinder petrol engine with 150 hp. The engine was mated with either a 5-speed manual as standard or an optional 4-speed automatic.

The second generation of the Nissan Altima was unveiled in 1998. Like the previous model, it was available in XE, GXE, sporty SE, and luxury GLE trims. Its exterior dimensions didn’t change much but the face received a new grille, headlights, and bumper, while at the rear it featured new taillights.

The interior was restyled it offered more space with nice, supportive, and comfortable front and rear seats that have enough head-, leg-, and foot room. The cabin layout was very practical, it featured easy-to-use buttons and dials. Other changes include the addition of Wood trim accents that gave the car a more upscale look, and a CD player adorning the dash on all but the base XE model.

In 1999 the Altima received a mid-cycle redesign which saw the car grow slightly longer. The face featured a deeper front grille, a headlight unit integrating turn signals and low-speed corner lamps, while at the rear it came with all-red taillights. The cabin was fitted with new front seats, rear seat cup holders, revised cloth upholstery, a redesigned instrument cluster with a digital odometer, and a rear window antenna. Side airbags were now standard on the GLE and an option on the GXE and SE.

Another mid-cycle upgrade came in 2001, with the Altima GXE gaining another Limited Edition model with features such as keyless entry with alarm, a power driver’s seat, and floor mats.

The SE can be distinguished by its body-color grille, fog lights, rear spoiler, alloy wheels, and white-faced gauges.

Under the hood, the 1998 Altima came fitted with the same 2.4-liter (KA24DE) 4-cylinder petrol engine used in the previous model, but now with improved power of 160 hp. The engine was mated with either a 5-speed manual as standard or an optional 4-speed automatic.

The 2002 Altima grew significantly, its exterior design was more aggressive, unlike its predecessor.

The Altima’s growth in size led to a better interior room that was customizable, by choosing between Blond, Frost, or Charcoal cabin colors that are accented by fake wood and faux titanium trims on the dash and door panels.

The dash has a stylish three-pod instrument design and a neat center stack with the audio system set high for ease of access. Available standard features include a tilt and telescopic steering wheel, and a 12-volt charging point inside the center console. High-end models add steering wheel audio controls and a trip computer. Optional features include leather upholstery, an in-dash six-disc CD changer, HID headlights, an auto-dimming rearview mirror, a power sunroof, and a winter package with heated seats and side mirrors.

The nomenclatures on the 4 available trim levels referred to the type of engine fitted: the base 2.5, the 2.5 S, and the 2.5 SL came fitted with a 2.5-liter four-cylinder petrol engine with 175 hp while the 3.5 SE came fitted with a 3.5-liter V6 petrol engine with 240 hp. These powerful engines were mated with either a 4-speed automatic or 5-speed manual transmissions.

The fourth generation of the Nissan Altima was unveiled in 2006 for the 2007 model year. This model was based on the D-Platform which was smaller and shorter, without jeopardizing interior space. Apart from the standard 4-door Altima sedan, Nissan also introduced a 2-door Altima coupe with this release.

The exterior styling featured a canted front fascia, a streamlined greenhouse, a streamlined stance, and curvy lines that gave the car a sporty look. The coupe shared a similar hood and dashboard design with the sedan but borrowed its styling from the Nissan 350Z.

In 2009, the Altima received a mid-cycle facelift that introduced a new hood, a redesigned grille, and new headlights that proved to be more appealing.

Inside, the Altima was fully furnished from the base trim to the premium models. Standard features included Velour cloth seat upholstery, a parking camera, a smart key, push-button start, and Bluetooth connectivity. Other features include eight cup holders and several hidden storage compartments.

Under the hood, the 2007 Altima came fitted with similar but enhanced engines as the previous model. The 2.5-liter 4-cylinder engine now produced 175 hp, while the 3.5-liter V6 now produced 270 hp. These engines were mated with either a 6-speed manual transmission as standard or a CVT as an option on premium models.

Nissan also offered a Hybrid version of the Altima from 2007 to 2011. It came fitted with a 2.5-liter 4-cylinder with 162 hp paired with a licensed version of Toyota’s Hybrid Synergy Drive system.

The exterior is composed of a front end that follows Nissan’s corporate v-grille with chrome surrounding and swept-back angular headlights. It draws many styling influences from “coke bottle styling”, which features a narrow center enclosed by broadened fenders.

Inside, the Altima’s cabin looked upscale with a 2+3 seat configuration, but for comfortability four occupants will be better. The seats were excellent and the interior was neatly assembled. It featured a six-speaker audio system with AM/FM radio and a CD/MP3 player, Bluetooth connectivity, and auxiliary audio input as standard.

In 2018, the base 2.5 trim was phased out, with the 2.5S now becoming the new “base” trim of the Altima. Standard features on the 2.5S trim include an audio system with a 5.0-inch touchscreen color display, keyless entry, and rear-mounted speakers. Optional features include a power-adjustable front driver’s bucket seat,  SiriusXM Satellite Radio, and a remote start system. This model also featured an upgraded NissanConnect Infotainment System with Apple CarPlay and Android Auto connectivity as standard.

Under the hood, Nissan kept the previous 3.5-liter V6 engine and the 2.5-liter 4-cylinder to power this model. On the transmission side, the 6-speed manual transmission was discontinued, and the CVT gearbox with paddle-shifters became standard.

Nissan introduced the sixth-generation Altima in 2018 for the 2019 model year. It is available in S, SR, SV, SL, and Platinum trim levels.

The exterior of the 2018 Altima features a new design language derived from the Vmotion 2.0 Concept car. Its front features a steeply raked windshield and hood, swept-back angular headlights, and a broad and chromed V-shaped grille. Its robust profile features an elevated beltline ahead of the sloped black-trimmed C-pillar that creates an impression of a floating roof, while the short decklid spoiler affirms the car’s sporty looks.

Inside, the Altima featured a broad low laying dash with a chrome, V-shaped strip that ran across the middle. The center console comprised a touch-screen infotainment system with Android Auto and Apple CarPlay connectivity placed at the top, climate control buttons at the center, and a storage tray and two cup holders below.

While preparing this review one thing that we learned is that the Nissan Altima has a very good rating in the mid-sized car category. It’s known for its high feature level, excellent handling, spacious cabin, powerful engines, comfortable seating, a relaxed ride, sporty design, and excellent fuel economy. It is a popular choice because of its reliability, efficiency, and good cargo space.

Please visit BE FORWARD and check out our list of 190+ used Nissan Altima’s listed for sale.